This will be my build log for a 17th century Royal Navy Battle Station. The station is loosely modeled after a 4th rate ship of the line, HMS Mordaunt, launched in 1681. It is based on the excellent plans drawn by Jeff Staudt, and the model itself is one of three produced in collaboration with two modeling friends: Mike Shanks and Don Robinson. Most of the background information and details on research and development of the kits is reported here in another thread, so I won’t repeat that here. Time to begin!
M

Most of the framing including the hull and deck framing is made of cherry. It's too bad that so much of it will be covered up, but it isn't expensive and it was just easier to cut the parts all at the same time from a limited number of billets, seen or not! The hull framing is 3/4" thick, actually 3/4" WIDE on the model. After CNC cutting, you can see that each piece is held in the 3/4" billet by 2 tiny triangular tabs (arrows). Very easy to remove and clean up the frames. I worked on those while the build board was drying (I glued a rosewood border around a beautiful piece of curly bird's eye maple I had). I also scribed scarfs in the two end frames as well as simulated bolts. I then gave these two a wipe of boiled linseed oil to even out the color. 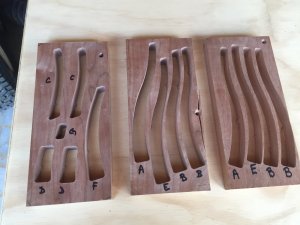 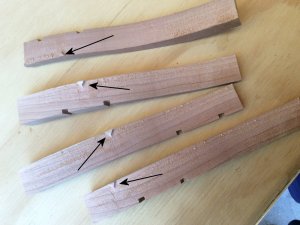 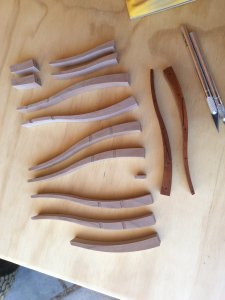 I can see the difference already. Cherry for the frames......nice!
Wonder what Don has for his frames?
Havagoodone mate
Greg
M

Hahaha... I can see this already. Dave and I have a tradition. I typically build the standard plain jane version of a model and he comes along after with the super detailed version. I love it...

Greg... all 3 of us have Cherry frames. Dave just added details and oiled his up to make them look super good!!!

mrshanks said:
Hahaha... I can see this already. Dave and I have a tradition. I typically build the standard plain jane version of a model and he comes along after with the super detailed version. I love it...

Greg... all 3 of us have Cherry frames. Dave just added details and oiled his up to make them look super good!!!
Click to expand...

I finished up the build board. I had some beautiful curly bird'seye maple so I cut off a piece and framed it with some rounded over 1/2" X 1/2" east Indian rosewood. It turned out pretty nice! 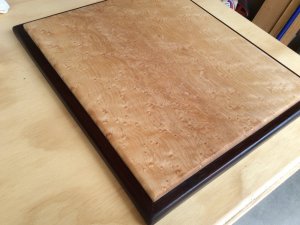 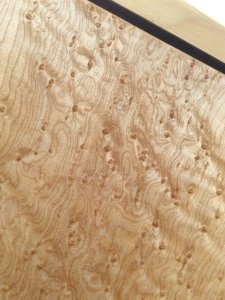 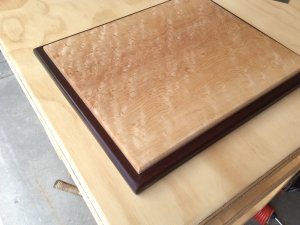 Outstanding Doc!!!! What size is your build board?

Absolutely beautiful. It will make a very impressive display.
I wish we can get that timber here.
Havagooday
Greg

The most important part of the build is squaring up the frame from the bottom. The lower deck clamp must be parallel to the two inboard supports, and the ends of the supports must lie on the perpendicular of each end of the clamp. I drew a baseline, parallel to one edge. I then cut out a rectangle of those dimensions and used double-sided tape to stick the plywood template to the build board. The clamp was exactly as long as the template and the two supports lined up with the perpendiculars. I then glued all 3 parts in place, removing the template after the CA grabbed a bit. Before gluing the deck clamp in place the plans call for a slight bevel of the top surface to the outboard edge. Mike says it was "minuscule" and eyeballed it with his sanding block. Suffering from OCD myself, what I did was blow up the profile of the clamp on the plans, measure the actual angle (4 degrees!) and re-mill the clamp with a 4 degree bevel in the top!!! Will I ever learn?? 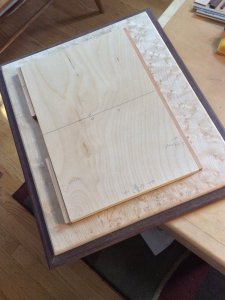 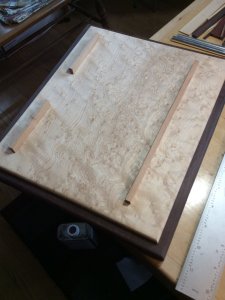 Another step introduction from the 'Modelteers' and you are living up to their motto: 'one for all, one for all.'.
Don has a lot to keep up to!
Havagooday
Greg

I applied multiple coats of wipe on poly to the board. While waiting for it to dry, I went ahead and installed the sills that frame out the 3 gun ports at the bulwark. The sills are a little oversize in thickness, so they need to be sanded down for a nice tight fit in the frame mortises. Squaring up these assemblies is critical. I used two try squares to get things aligned and some weights to hold the parts until dry. Glue was Weldbond, with some CA applied to the joints later (drawn in by capillary action) for added strength. The sills are proud of the frame surface and need to be trimmed with a sharp blade and then sanded flush with the frames themselves. 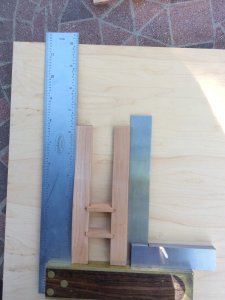 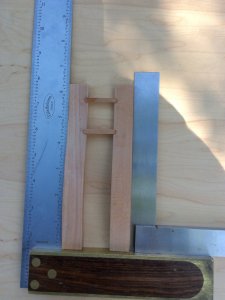 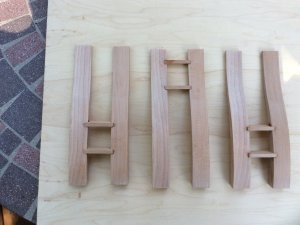 G'day Dave
Fantastic idea about using two try squares.that's one idea will be using in the future. Thanks for sharing mate.
Happymodeling
Greg

I trimmed the sills and finished sanded all the frame parts. I also glued the support piece between the two deck beams that frame in the hatch. I also test fit the deck beams on the build board. There is a final beam that will be fitted once the deck beams are glued in to this point. 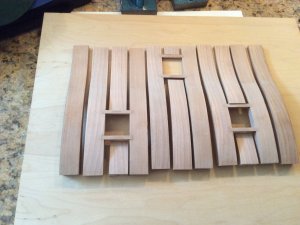 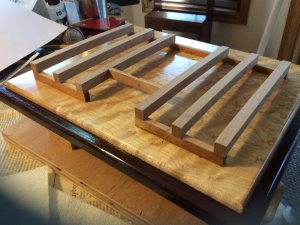