It's been a few months since I've posted anything , so thought it might be time to give you a run-down on my progress with 'La Salamandre'. As I have stated previously, I don't intend to give you a blow-by-blow account of my build, as the ship construction has already been extremely well described by others, notably Uwe.
Instead, I will confine myself to occasional updates, together with any particular construction notes that I think might be useful to other builders.

I first became interested in this ship about thirty years ago, when I found Boudriot's book on La Salamandre in a second-hand maritime bookshop in Newcastle. i never got around to doing anything with it, as I had other construction projects on the stocks, but when CAF's kit came along I just had to have it!

That was more than two years ago, and I still had a lot of work to do to finish 'King's Fisher' - the legendary Bob Hunt kit.
I did what any sensible modeller does with a new kit, and that was to thoroughly check all the contents, and then put it out of the way on the highest shelf in my workroom !
I found one of the billets of wood was missing, but this was soon replaced by CAF.

I eventually started the kit in January of this year, and here I have to record a huge debt of gratitude to Uwe for the incredible record of his build, which has helped me out on several occasions as the 'instruction manual' for the kit is not the best, being rather sparse and in my copy the ink must have been running out when it was printed, as a lot of the diagrams cannot be read! I think I have read that CAF are revising the instruction manuals on some of their earlier kits, so I hope they are rather better now.
I have to say this POF kit is probably not a good one for a beginner, but luckily my 65+ years of modelling experience are pulling me through, and in particular my experience of POF building(I know roughly where everything should go on a ship!)

So, time for a few pictures! 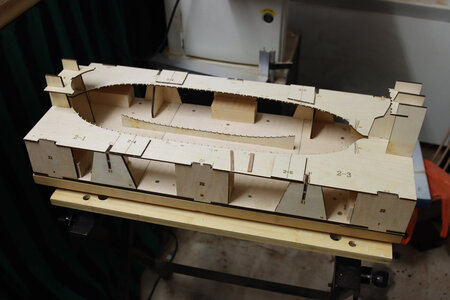 First, the jig. Make sure everything is square - if the jig is out, then everything is out. I found all the parts of the jig fitted quite accurately, but the ply base had warped slightly, so I reinforced it with a couple of substantial timbers underneath. 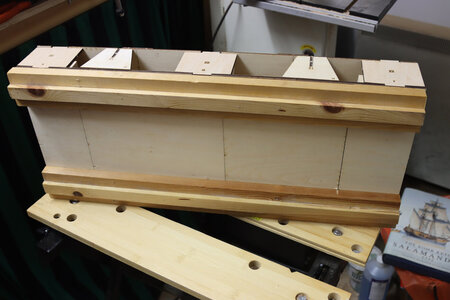 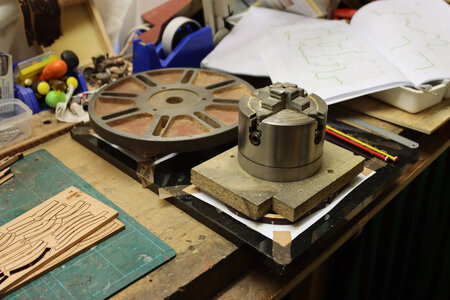 When building up the ribs, use a nice flat surface - mine is a stone kitchen cutting board that I picked up for about £2 (3$?) years ago - It is quite flat, although probably not up to the standards of an industrial plane table. I believe one of the SOS members uses a thick sheet of glass?
Make sure you hold down the frames with plenty of weight until thoroughly dry. 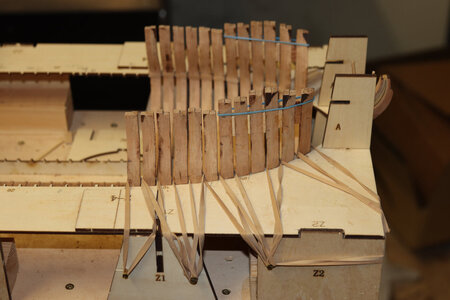 I use elastic bands to ensure the frames sit properly in the jig. 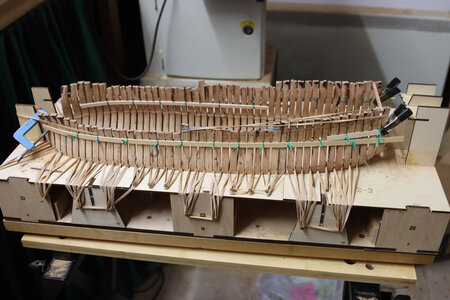 You can't have too many elastic bands! (Ann hasn't yet found the kitchen draw has lost most of it's store!)
The horizontal timbers you can see on both sides of the hull are used to fair the tops of the frames. They are set down from the top to give a level for the chocks that will connect the tops of the frames together. I use plastic wire ties from the garden centre to fasten the temporary timbers - they really clamp the timbers very well, with the advantage they can get through the small gaps between the frames which normal clamps would be unable to do.

Hallo Ted,
great to see, that you started your Salamandre - I am very happy to read, that I was able to assist you partly with my started (and still not finished) log.
I am pretty sure, that you are enjoying the build - It is a beautifull and highly interesting model

Uwek said:
Hallo Ted,
great to see, that you started your Salamandre - I am very happy to read, that I was able to assist you partly with my started (and still not finished) log.
I am pretty sure, that you are enjoying the build - It is a beautifull and highly interesting model
Click to expand...

Thanks Uwe!
You helped me greatly, especially on the frames at the stern. The diagrams in my 'manual' just couldn't be seen and were useless.

Thanks to all of you for your 'likes' - a great encouragement to carry on posting! - more soon.
Ted

Promising start, good luck, I will continue to follow

You're off to a fine start there Ted, and thanks for sharing it. I'm excited to see that our little group of La Salamandre builders seems to definitely be growing. I believe you will find this to be a most rewarding project. Looking forward following your progress.

Jimmy said:
You're off to a fine start there Ted, and thanks for sharing it. I'm excited to see that our little group of La Salamandre builders seems to definitely be growing. I believe you will find this to be a most rewarding project. Looking forward following your progress.
Click to expand...

Thanks Jimmy,
It's a nice kit except for the instructions. Thank heavens for Boudriot!

She's out of the jig!
All right, the photo shows her still in the jig, but I've found she comes out smoothly when required. 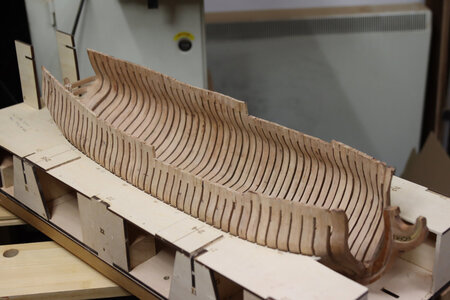 Next thing to do was to insert the hawse timbers, and this is where I had a problem. In between installing the thwartship frames, I had assembled the hawse timbers on the small jigs provided. When I came to put the assemblies in place they didn't fit! Not at all!
I found the same problem as Uwe found, in that the keel appeared to be longer than it should (approximately 2 - 2.5 mm) and the jig had produced a flatter curve than required.
I said several naughty words, then set to with all the leftover timber from the billets containing the ribs, and made a new set, doing it my way, and on the model. 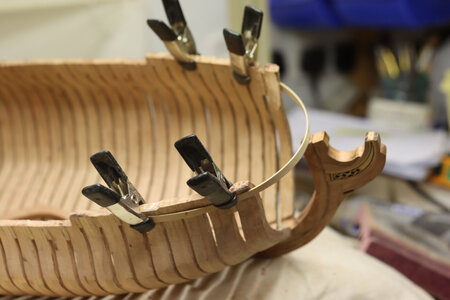 First thing to do was to bend a spline around the bow of the ship to give me a true line to work to. 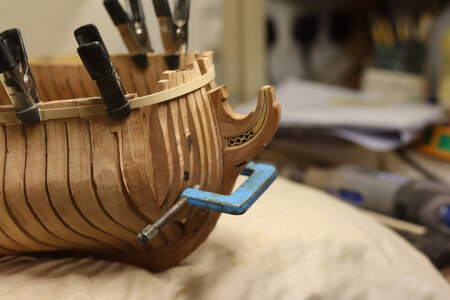 I then cut the individual hawse pieces to suit from the scrap timber, using the old billet that had contained the original hawse pieces as a 'template', adding extra length to reach frame No.1, and roughly shaping the top of the pieces to fit inside the spline.
I also found the same problem that Uwe and others had found, that it was necessary to add another hawse piece to increase the width of the assembly. (Not shown on the photos)
I wasn't worried about that, as the hawse pieces on the model differ completely from the actual ship, as they should be like cant frames, and fan out from the stem, so not historically accurate in the first place. 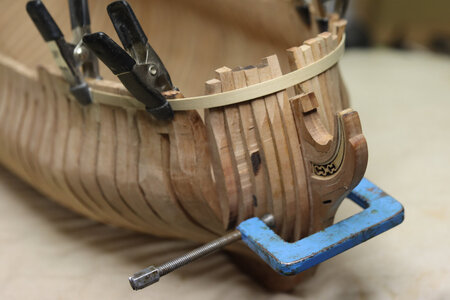 All for now thought I would 'own up' to the error, in the hope that no one else falls into the same trap!

It is nice to see another Salamandre hull growing

A little more progress!
The hull has been rough sanded into shape and any problem areas rectified. The inside of the hull has then been finely sanded, and a start made on fixing the main deck beam clamps (Deck beam supports)
I boiled the 3x5 clamps in my trusty wallpaper stripper, then fastened them into my homemade clamping device to dry out overnight. Perfect! 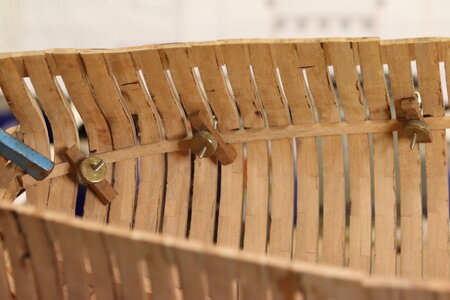 Beam clamp going in using home made clamps. Ignore the wavy line to the top of the ribs - they have just been roughly cut down to a few millimetres above finished level.
The level of the beam clank, plus the half deck above it have been measured from the profile drawing and marked in the timber using a cutting wheel in the pendant drill. This ensured I wouldn't lose the levels as more sanding was carried out on the inside of the hull.
To my mind, one of the problem areas with this kit is the way the guide lines for the shaping of the ribs have been lasered some way into the timber. This means that very often you end up with areas of char which can only be removed by sanding down the ribs even more than they are. I'm taking the view that as I will be planking both internally and externally on this ship it doesn't matter. Compare with my model of King's Fisher (see link below) which has all the framing fully exposed on the port side. 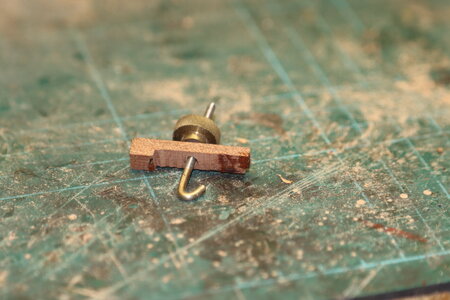 Example of home-made clamps - only took a couple of hours to make a dozen. The narrow shank will generally just fit between the ribs

Sorry, but that's your lot for today!

You may be wondering why you haven't seen any posts on Salamandre recently. The reason is that CAF put out their kit of 'HMS Granado', a ship which I've wanted to build for years, but never got around to.
Lots of thinking ensued, together with discussions with the chancellor, plus morbid pondering on my expected life-span.
In the end, I decided to go with Granado, and so Salamandre has been mothballed for the forseeable future.
I'm about to start a log on Granado, so will close this thread down for the moment.

I am happy also about the Granado - also a very good and highly interesting kit !!!

For everybody interested in the Granado kit please take a look at the kit review: