The 50-Gun ship
by Rif Winfield 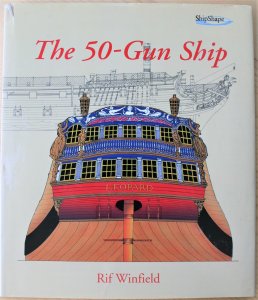 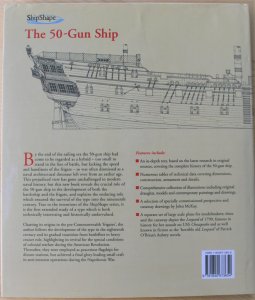 the softcover-version of the book with different cover 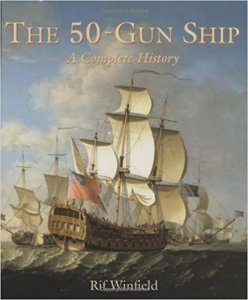 By the end of the sailing era the 50-gun ship had become regarded as a hybrid, too small to stand in the line of battle, and lacking the speed and hardiness of the frigate, so it has often been dismissed as a naval architectural dinosaur left over from an earlier age. This book aims to reveal the crucial role of the 50-gun ship in the development of both the battleship and the frigate, and explains the enduring role which ensured the survival of the type into the 19th century. Charting its origins in the pre-Commonwealth frigates, the author follows the development of the type in the 18th century and its gradual transition from battlefleet to heavy cruiser role, highlighting its revival for the special conditions of colonial warfare during the American Revolution. Thereafter they were employed as peacetime flagships for distant stations, achieving final glory leading small craft in anti-invasion operations during the Napoleonic War. The Leopard is the subject of the cutaway drawings.

Features include: an in-depth text, based on the latest research in original sources, covering the complete history of the 50-gun ship; numerous tables of technical data covering dimensions, construction, armament and details; comprehensive collection of illustrations including original draughts, models and contemporary paintings and drawings; a selection of specially commissioned perspective and cutaway drawings by John McKay; a separate set of large scale plans for modelmakers; these and the cutaway depict the Leopard of 1790, famous in history for her assault on USS Chesapeake and as well known in fiction as the 'horrible old Leopard' of Patrick O'Brian's Aubrey novels.

History and development of this type from 1650 to 1816 - All 50-gun ships in the British Navy are covered in detail, with a chronological history and full details of every vessel built or acquired, plus chapters on gunnery, construction, manning, stores, masts and sails with sailing qualities. 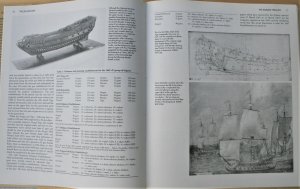 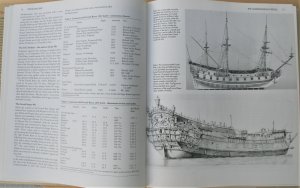 left side: The Earliest Frigates with HMS Sheerness 1691, Tiger painting by Van de velde
right side: The Commonwealth Period with "Dover of the Taunton / Crown 1654/1660 and HMS Leopard 1659

Rif Winfield has been researching naval matters for 25 years and has been a frequent contributor to Jane's Fighting Ships. This is his first book. 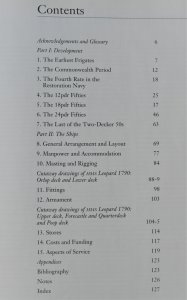 Part I: DEVELOPMENT
The earliest frigates
The Commonwealth period
The fourth rate in the Restoration Navy
The 12pdr [pounder] fifties
The 18pdr fifties
The 24pdr fifties
The last of the two-decker 50s

Plans and cutaway drawings in scale 1:96 of HMS Leopard in pocket. 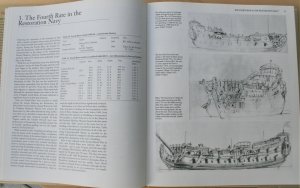 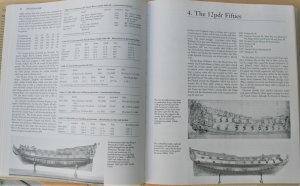 The classes of 50-gun ships suffered from being neither fish nor fowl, being too small for the line of battle and too large to serve as frigates, and are usually neglected in histories of the era. . The book is representing a complete history of this type of ship and his forerunners starting in the 17.th century and is fully provided with reproductions of historical draughts and photos of models.

The book is divided in principle into two sections. The first looks at the development of the 50 gun ship, following the lines and principles of the early frigates copied from Flemish privateers, commonly known as Dunkirkers, from the first half of the seventeenth century. The story develops through the Commonwealth period, the Restoration up through the last ships built during the Napoleonic Wars. This section looks especially at the design changes to the hull and armament, the restrictions created by the rules of the Establishment, and how that led to the navy falling behind the capabilities of the other navies in Europe.

The second section of the book looks at the ships themselves, general layout, manpower and accommodation; masts and rigging; fittings; armament; stores; costs and funding; and how they were used in service.

Throughout the book there are lots of superb period diagrams showing you what the ships looked like and how they changed. All ships of this class seem to be mentioned, described and you get a real sense of what the ships were like and how they compared with one another. And there is a bonus here for fan's of Patrick O'Brian and his hero, Jack Aubrey of the Royal Navy. One of Jack's least favorite commands, the "Horrible Old Leopard", is prominently featured in this volume, including meticulously detailed big size cutaway drawings of the HMS Leopard 1790 (Portland-class) and hull plans in a pocket in scale 1:96, drawn by Donald McKay.

If you are interested in the fourth and fifth class vessels and their specialities, this book is highly recommended. And also if you are interested not only in the well known threedeckers and want to learn more about the working horses of the navies...... 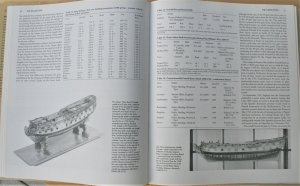 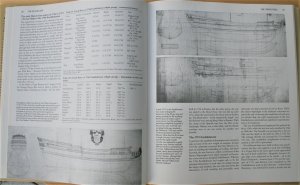 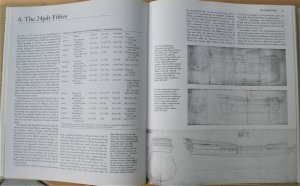 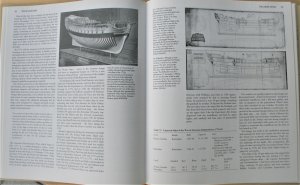 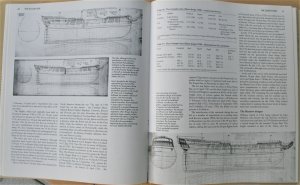 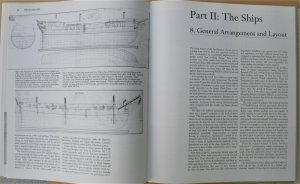 More Look Inside photos you can find in the following post

The 50-Gun ship
by Rif Winfield 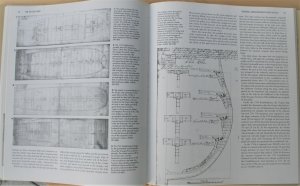 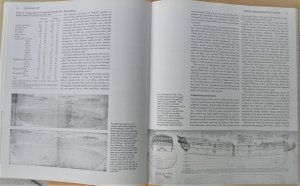 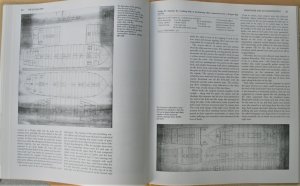 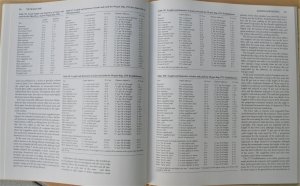 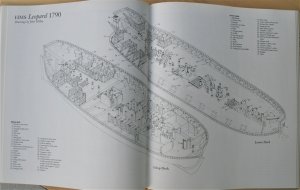 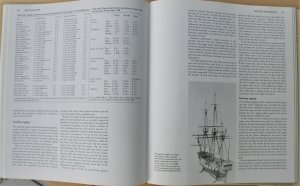 left side: Orlop deck and Lower deck of HMS leopard 1790
right side: length and diameters of masts and yards, unidentified model of a 50-gun ship 1685 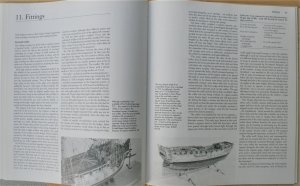 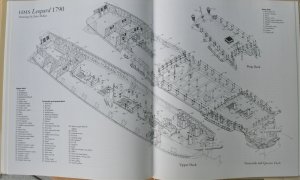 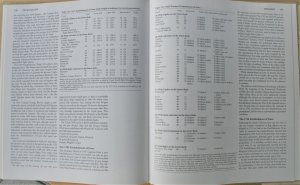 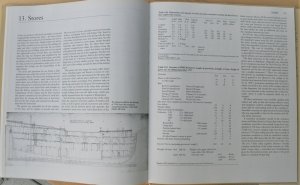 left side: Establishments
right side: inboard profile of HMS Romney 1762 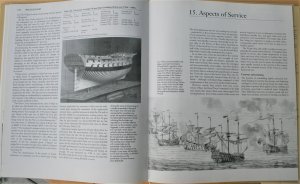 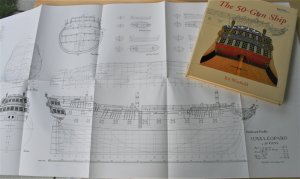 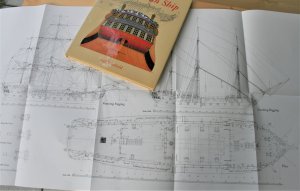 Uwe, does the paperback edition have the separate plans sheets as well? I’m looking for a large project to build....

Asat said:
Uwe, does the paperback edition have the separate plans sheets as well? I’m looking for a large project to build....
Click to expand...

Hallo,
I think so.
When I went through the descriptions of some of the copies available at abebooks.....

The 50-Gun Ship: A Complete History by Rif Winfield and a great selection of related books, art and collectibles available now at AbeBooks.com.
www.abebooks.com

So before you order a copy of this book, I would directly ask the seller, if the plans are included

BTW: I made also once a Ship History Topic of the HMS Leopard, a really very interesting vessel and class !

Due to the fact, that I picked up once more the book "The 50-gun Ship" by Rif Winfield (see Book Review The 50-gun Ship) my interest was growing to find out more about this vessel. The information I found in the book and the web I want to summarize and share with you. HMS Leopard 1790 - 1814 /...
shipsofscale.com
You must log in or register to reply here.
Share:
Facebook Twitter Reddit Pinterest Tumblr Email Share Link
Top