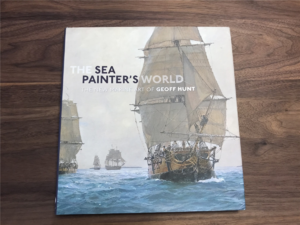 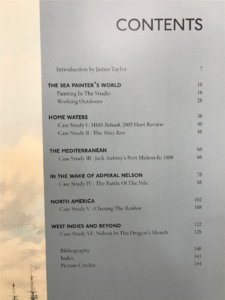 This timely follow-up to Conway's highly successful Marine Art of Geoff Hunt (2004) presents the considerable artistic output of Britain's leading marine painter since 2003. This new volume is heavily illustrated with images ranging from large paintings to sketchbook drawings with text written by the artist himself. The new book reflects Hunt's developing career during a time in which he served a five-year term as President of the Royal Society of Marine Artists, worked on large-scale paintings such as the definitive Mary Rose,and also completed numerous outdoor sketches and paintings.

Geoff Hunt is a former President of the Royal Society of Marine Artists. His work is represented in public and private collections worldwide, and Geoff is an expert on the Navy of Nelson and Patrick O'Brian. In 2004 The Marine Art of Geoff Hunt was published to much acclaim, presenting over 100 of the artist's key works from a thirty year career. Geoff's studio is on the site of Nelson's house at Merton Place.

“Another magnificent volume of the work of one of the undisputed foremost maritime artists of our own time, well-known to many of our readers, this one covering many of Geoff Hunt's recent paintings. The last time I had the pleasure of receiving a volume of his paintings was three years ago, the book written and produced together with Brian Lavery on HMS Surprise, containing all the cover paintings of the Patrick O'Brian books as well as a wealth of others.

This new book covers Geoff Hunt's work since then as well as some earlier paintings. In contrast to the HMS Surprise volume, there is greater diversity of subject here. Though the artist's home period is clearly that of the late 18th and early 19th centuries, we are taken right back to the 16th century with his definitive study of the Mary Rose based on all the researched information now available (culminating in his now well-known 2009 painting reproduced in the book) and right up to the present day HMS Bulwark at the International Fleet review on 28th June 2005, HMS Dragon building at VT Portsmouth and HMS Ark Royal in drydock at Portsmouth in May 2009. Modern sail and port scenes are covered as well.

Not only is this book as stunning as one would expect for the many beautifully reproduced paintings, but it also affords an insight into the creative processes of the marine artist himself. It takes us through his sources, right back to the 16th Century Anthony Rolls in the case of the Mary Rose painting and research, to preliminary and developing sketches for the final painting and into the artist's studio itself. Several chapters are written as case studies of the evolution of final works of art; apart from HMS Bulwark and Mary Rose we have 'The Mediterranean – Case Study III : Jack Aubrey's Port Mahon in 1800'; 'In the Wake of Admiral Nelson – Case Study IV : The Battle of the Nile'; 'North America – Case Study V : Chasing the Rainbow' and similar. There are several subjects here of particular interest to American members, such as the CSS Alabama sailing from Cherbourg in June 1864 to fight the USS Kearsage and a fine study of the big Humphreys frigate USS United States making passage in a good sailing breeze under all plain sail. Then, 'Under Fire off Manhattan', 'Ranger Goes a-Roving', 'Hancock and Fox', 'The USS Chesapeake leaving Boston Harbor', finally 'USS Constitution at the Battle of Tripoli 1804' and the cover painting for James Nelson's The Continental Risque. Trafalgar is to the fore, and the subsequent Strachan's Action. Our readers will have noticed that Jack Aubrey is still very much in evidence, but so is Hornblower, with 'HMS Hotspur off Brest 1803'; 'Dangerous waters: HMS Renown; HMS Lydia hove down and refitting in the Pacific and 'HMS Sutherland's Last Battle'. There are many more fascinating subjects, from racing tea clippers (The Great Tea Race of 1866') to WWI battlecruisers ('HMS Indomitable entering Grand Harbour, Valetta'). The cover image depicts Sir George Collier's Squadron in Penobscot Bay, 14th August 1779 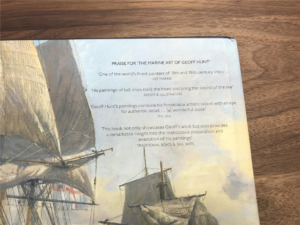 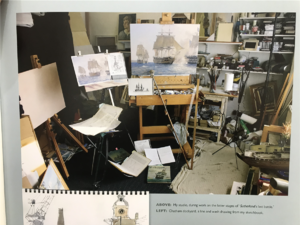 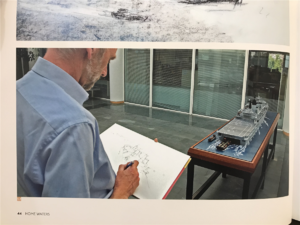 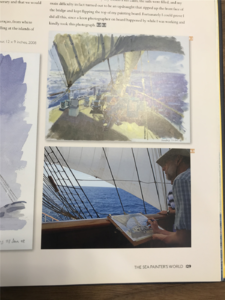 Cover of the Book

Paintings in the Book 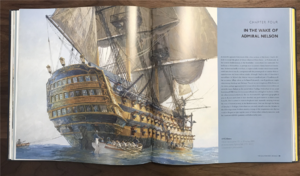 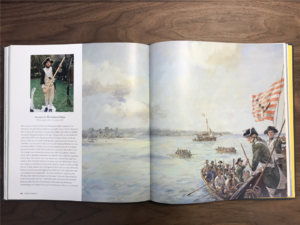 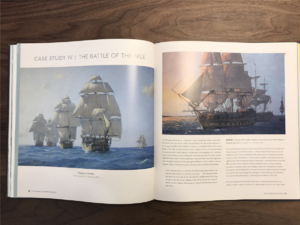 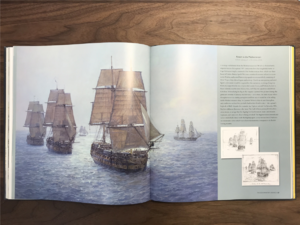 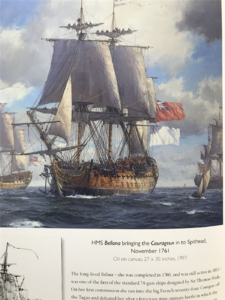 I bought this book about two years ago. This book is very artistic and contains large numbers of paintings.
I find that the book reviews of "The Marine Art of GEOFF HUNT" and "THE FRIGATE SURPRISE" are already posted by Uwek. So I decide to post this book review and share those photos with everyone.
Last edited: Oct 13, 2019