Hi All,
I haven't posted lately, but that doesn't mean I haven't been working on my model. I have pretty much finished the running rigging and I just couldn't seem to get the model to a presentable state for photos and updates as I went along.

For some reason I found this model very difficult to rig and I don't believe there isn't any aspect of the running rigging that I didn't do over at least once. About half of the belaying pins are completely inaccessible and I seemed compelled to run lines on the wrong sides of things, only to notice it much later! I had a tendency when snipping off the line at the belaying pin to snip on the wrong side of the pin! I was continually messing up the tension with each addition line! etc etc. and there's a fair bit of chain used for the rigging which is very frustrating to work with as it usually needs to be cut to an exact length without much wiggle room. Anyway, I got it done. 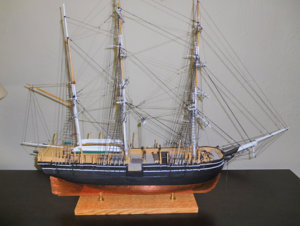 I bought some internally stropped blocks from BlueJacket and used them where indicated. I think you can make them out below on the topsail halliards, which are chain. 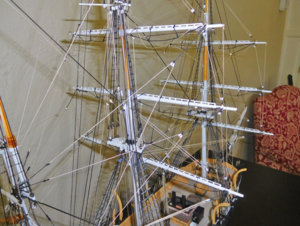 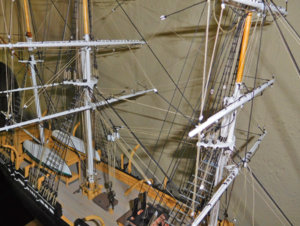 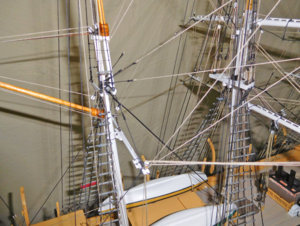 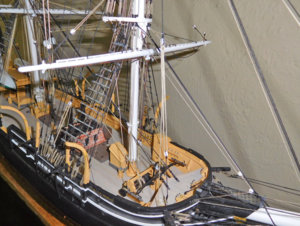 I also managed to snap off several davits. 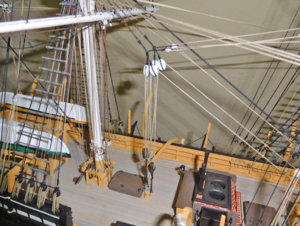 So, I'm closing in on the finish line. The remaining items to complete are the whaleboats, the anchors and the stage that attached to the starboard side.

I'm really pleased with my upgraded blocks on this model. The larger ones (3/16" anc 5/16") as well as the internally stropped blocks are from BlueJacket and the smaller ones (1/8" and 3/32") are from Syren.

I don't know if any of you have ever the noticed the paradox in model building, but this last rigging job has really pointed it out to me. On the whole, this hobby is relaxing, challenging, rewarding, fun, contemplative, meditative, satisfying and any number of other positive things. However, at the same time and paradoxically it seems to comprise nothing but a series of jobs that individually are aggravating, tedious, repetitive, frustrating, and tending to make one bang one's head against the wall! How is this possible? I think we need a new word for this phenomenon. There's a word "synergy" which applies when the whole is greater than the sum of the parts. What would be the word when the whole is the opposite of the sum of the parts? Perhaps "frustifaction" or maybe "satistration" I don't know.

A pleasure to look at
D

Great work David, she really is looking great!! Can't help you with a singular descriptive word as I believe there maybe enough for a novel.

Great looking ship.
Can you tell us the technique you used to gray the deck planks?
It looks far more realistic for a proper working ship.

Thanks guys, much appreciated!

Jolly Roger - I have always been frustrated getting a decent finish for the deck, especially when I'm using the usual kit-supplied basswood. Even with just varnish, the colour never looks even and if I stain it, it never comes out well at all; it always looks very blotchy. So, this time I tired inexpensive acrylic artists' paint. I bought black, white, yellow and brown. I experimented with the proportions until I had what I though was the right shade of gray. Adding small bits of yellow and brown was essential to making it look like grayed wood. This was not a quick process and it took a lot of adjusting. I watered it down only a little, so that it was thick enough to hide the blotchiness of the wood, but not so thick as to completely mask the wood. When it was dry, I lightly rubbed it down with steel wool which gave the deck just the right amount of sheen. I didn't apply any varnish or further finish.

Here's a picture from an earlier stage of the build that shows it better. 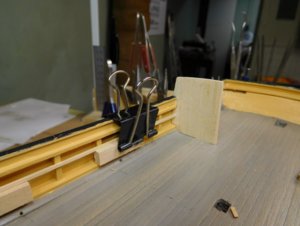 My next model is the Pride of Baltimore. That ship has a fairly dark finish on its deck. Concerned that I'll have a hard time duplicating that look with the supplied basswood, I've ordered some .5mm strips of cherry from Cornwall Model Boats which I believe will give the effect I'm looking for without too much effort.

Thanks again everyone for words of encouragement!

What a beautiful job on the CWM!! I built the AL version some 25+ years ago, but it didn't look as good as yours - of course it was only my second wood build, so that may have something to do with it. Anyway, job well done to you!

Thanks Jim!
That's very kind of you to say. I'm currently working on rope coils to hang on the belaying pins. I'll have some more pictures soon.
David

Well, I have officially finished my Charles W. Morgan.

(I would like to say that it's "done and dusted", but I know from experience that the dusting part has only just started.)

Since my last post, the remaining undone bits were the rope coils for the belaying pins, the anchors, the cutting stage and the boats. I didn't post any updates as I was working through these, as they were very simple and straightforward. They didn't pose any problems, and there were no great insights that would benefit anyone from my sharing.

Here are a couple of pictures showing the finished model - 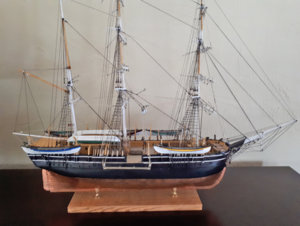 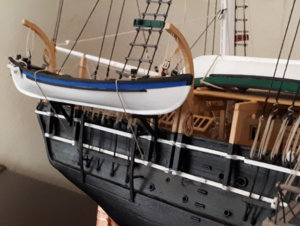 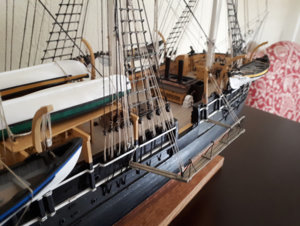 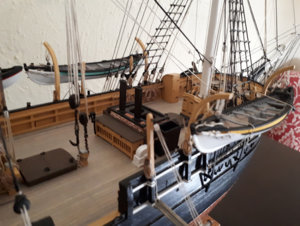 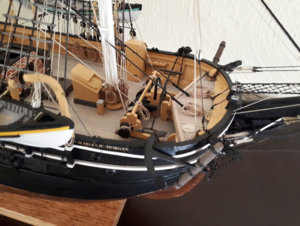 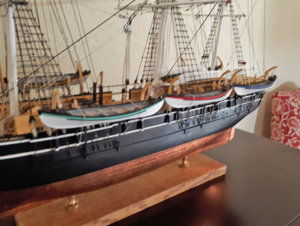 I think I've mentioned it before but it bears repeating how much I enjoyed this model. I think this has to be one of Model Shipways best kits. The plans are excellent with every detail very clearly covered, and the kit is well designed. While it's challenging, at no point do you find yourself fighting with the kit to get a decent result, which is not always the case. If you're looking for a break from naval vessels, this is a great option.

I'm looking for a smaller project next time around and have purchased the Pride of Baltimore II which I'll be starting soon. Those clippers were very beautiful ships and I won't have to build an additional to the house to accommodate the model.

Many thanks for your comments and "likes."

we wish you all the Best and a HAPPY BIRTHDAY

Hope to see much more of such beautiful models like your Charles W. Morgan

Hey David, Happy Birthday! Today is yours, why not to have a great one!!!!!

Thank you very much for the comments and "likes." Much appreciated.
D

Congrats to your finished model!!

I suggest you build a ship name The Terror. Similar arrangement. Additionally supporting steam propulsion because it was supposed to be an icebreaker.
You did a great job with your ship.

I have looked at the Terror and I would like to build it. One big attraction is the metal plating on the bow; I could make any kind of mess I wanted to tapering the planks and it wouldn't matter! It also has a really interesting planking pattern on the deck. There are just too many interesting options out there.
Thanks for you kind words, and thank everyone for the likes.
David