A very simple little ship, scratchbuilt to a scale of 25 feet to 1 inch. Just under 4 inches long on the waterline. It took 25 hours to build, spread over 13 days. Masts, spars and rigging 100% metal. She was a Geordie collier that spent 66 years humping coal from the northeast coaling ports of Great Britain, down to London, but did the occasional trip to Baltic ports. Not a very popular type of model. The ports did not conceal guns, they were just painted on, initially to make enemy ships think they were Royal Navy brigs-of-war. After the war ended, most collier brigs kept their painted ports just as decoration, as did many of the big iron and steel windjammers, right up to the end of the days of sail in the early years of the 20th century. These are, for some strange reason, often referred to as "working ships," but in truth ALL merchant ships were "working ships!"
Bob 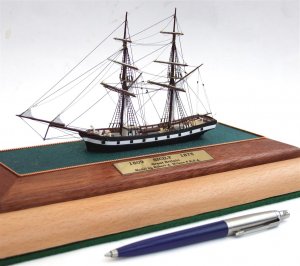 I was very interested to see this. They are mostly forgotten in history and literally hundreds were lost off the east coast of England where I live. Lumps of coal still wash up after a storm and this is where they come from, ships which were mostly overloaded and in poor condition. Nice build and thanks for posting.
S

Thanks, there has never been much interest in merchant ship modelling, despite an infinite number of different types and sizes to choose from. I build all sorts of merchant ships, both sail and steam. I was in colliers myself many years ago (1962) sailing out of Tyne Dock, South Shields in the colliers Wandsworth and Frederick T. Everard. The Sicily must have been very well built to survise for 66 years!
Bob
You must log in or register to reply here.
Share:
Facebook Twitter Reddit Pinterest Tumblr Email Share Link
Top