Well, this is the other ship which I am working on (and, as such, the guilty one why I am not proceeding that much with SoS) - but I enjoy it. The ship's hull had been done quite a while ago and now it has to be finished. The state of the ship as I started working on it is shown on the first photo - hull ready up to the main deck, still in the Hahn jig. Frames and nearly everything else is done of Costelo Boxwood (the best quality I have seen to date), wales , aft etc. Ebony (again, beautiful quality). Hull planking as well as deck planks are dowelled with 0.6mm Costelo dowels.
I started with the completion of the inside planking (Swiss Pear). 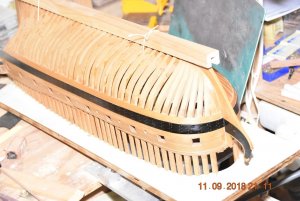 The hull is still in the Hahn jig. I put a cover onto the false keel which is Ebony and as such, very vulnerable. 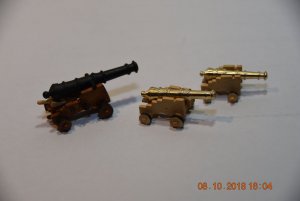 The gun barrels were a bit of disaster. First I made a Boxwood master, heat resistant silicone mould and cast them in Pewter. Well, came out very ugly. The I decided that I will turn the individually from brass - at the second stage with the help of the duplicator which has already been written about. So brass, blackening (did not come out very well), flat black acrylic and then a graphite powder bath. And then come the small details, carriage, trucks, quoion, blocks, rigging - close to 50 pieces per gun. 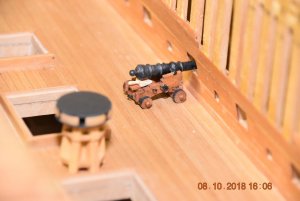 The first trial to check carriage heights. The capstan is made too. 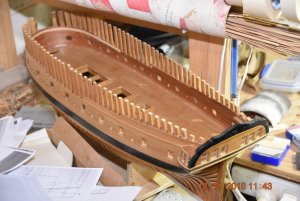 The hull had been cut out of the jig. It looks like a ship now. 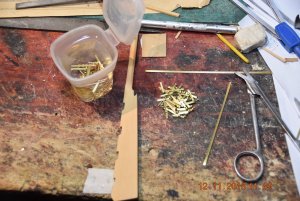 The rough rudder, pintles and gudgeons before blackening. 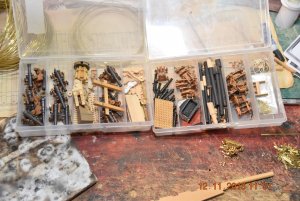 Odds and sodds for future installation. 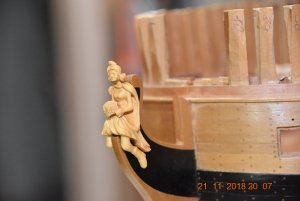 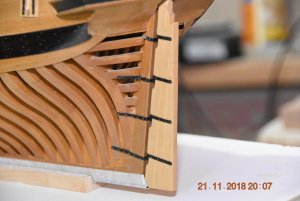 The rudder is installed. 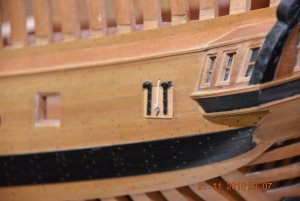 Gunport lid installed. Its material is exactly the same as the hull planking, but the latter had been exposed to light for more than 2 decades, hence the difference in colours. 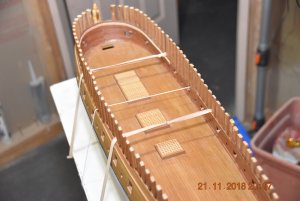 The gratings are also made of Costello with the conventional 'comb' method on the circular saw. 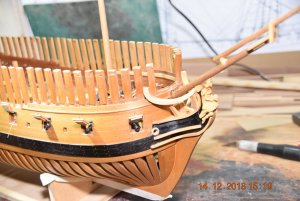 The bowsprit is made but not glued in yet. Hahn did not include masting / rigging plans to Oliver, so following Dave's advice I am using Rattlesnake's plans for it. 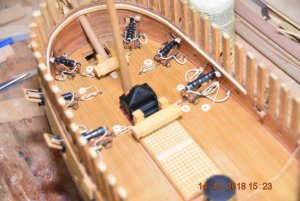 This is the current state before the fore castle's beams and planking will be installed - and everything underneath covered. So better have a few pictures about it!
Janos

She is looking very good - many thanks for sharing also this built with us.....

I have one question:
we can see, that you still did not shorten the frames to the correct length, although you finished more or less the deck with guns etc.
Are they not hindering the access to the deck works?

Fantastic, Janos! Thank you very much for sharing.

Tnx for sharig this logg, i vil follow. I vil ask you a question? earlier you talked abaut casting pewter in heat resistent silicone.
How is this working, i am very interesded, are there any photosesions of how to do it?.
I hawe a lot of old tropys of pewter i kan use for casting stuf like cannons and so on!.
By the way, very nise model so far.

Uwek said:
She is looking very good - many thanks for sharing also this built with us.....

I have one question:
we can see, that you still did not shorten the frames to the correct length, although you finished more or less the deck with guns etc.
Are they not hindering the access to the deck works?
Click to expand...

Hi Uwe
I just cut the frames close to the jig at that time. They are in the way sometimes, yes, but I did not work out the correct cutting positions then. I will cut them following the 3 main sections (fore castle, midship, quarterdeck) as the respective deck beams are installed (no deck beam in the mid section of course)
Janos

Norway said:
Tnx for sharig this logg, i vil follow. I vil ask you a question? earlier you talked abaut casting pewter in heat resistent silicone.
How is this working, i am very interesded, are there any photosesions of how to do it?.
I hawe a lot of old tropys of pewter i kan use for casting stuf like cannons and so on!.
By the way, very nise model so far.

Hi Norway
I will publish a few photos next time I would cast. The main question (and the problem I still struggle with) is how to make the mouldings. Back then we used to make gipsum molds. We have the heat resistant silicone now which is very flexible. The molds can be made in two parts, the indexing can be a problem then. Or, it can be done in one piece and just ripped off to remove the master or the cast but it is difficult to find the proper wall thickness which allows the removal of the cast but strong enough to keep the shape. This all will make a bit more sense with the photos later.
As mentioned, in this case I was shying away from the casting for the sake of individual turned pieces. I am doing the same for Sovereign as her cannons were brass and the colour of the Pewter is far not correct.
Janos

Nice looking model. Beautiful work from you Janos, and I really like your neat treenailing.

Great work Janos, everything is so clean. All the work in those guns really show, amazing!

Thanks for the feedback and the likes, guys! I enjoy building this ship!
Janos

G'day Janos my dear friend.
All I can say is this is another exquisite example of your incredible craftsmanship.
I should be use to your work by now, but every model that you show us, I still Google and drill at every photo.
Love it all.

Thanks, Greg, I appreciate your comments!
Janos

Progressing with Oliver (SoS is still put aside). The forecastle is now ready for deck planking. I laid the deck beams, carlings, the frame for the grating etc., then cut the protruding frames and attached everything which could collude with the deck planks afterwards. I also laid up the anchor cables as I won't have access to the after the deck planking. The bowsprit is also glued in because of the same reason.
Janos 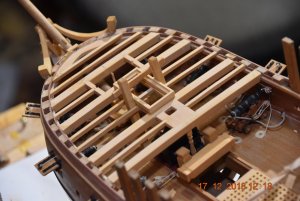 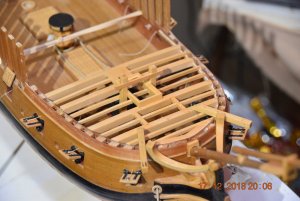 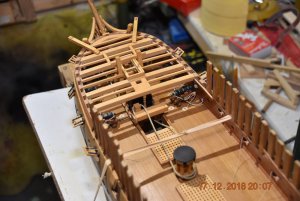 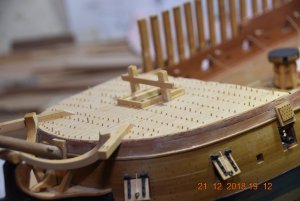 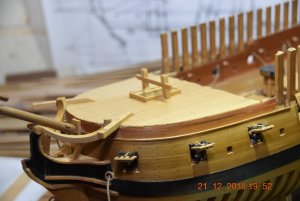 Hello Janos
Just catching up on your great Oliver Cromwell build, you sure are making her spiffy, so very much very fine details, you have given me a lot of great ideas to follow in my Oliver Cromwell build. I am very envious on your great looking Figurehead, I will be giving this a carving try in my build this coming year. But for sure I will never to be able to match your great skills at carving but I do want to give it a try.

My Admiral and I pass along out Best Wishes to you and your Family for a Very Merry Christmas and an Even Better and Happier New Year to Come from out House to Yours, ENJOY.