I wish that I could do work half this good. Maybe one day. Great work Dave. I've admired your work for sometime.

Pawley said:
wish that I could do work half this good. Maybe one day
Click to expand...

I am sure you will!! That's why we have modelers as Dave, and then the rest of us...

You guys are way too kind. I’ve found that the best results happen when you go slow. This isn’t a race! This is for fun! You all do a great job, from what I’ve been able to see, so just keep at it!

Hi Dave,
I think you and I have the same gage for tree nails. What size are you using if you don't mind me asking?

Hi Mike:
For this 1/32 scale build I’m using a #58 drill for the treenails. The nails themselves are birch toothpicks.

Cut off the ends of the toothpicks to about 1/2” long, soak them in black dye ( I use Behlen’s SolarLux Jet Black dye) and let dry. Voila! Simulated metal bolts!

Dave, I'm looking at your deck beams and they appear to be wider than 3/16 of an inch. I also measured the plans and come up with 1/4 inch for the lower beams and 5/16 inch for the upper beams. Should I use the plans or just use 3/16 and 1/4? I've been burned on the measurements before and don't want to repeat that mistake.

Thanks Dave. I'm off to cut wood in a few minutes and want to get it right.

With the Battle Station completed, it's back to work on Blandford. I'm laying out and gluing together the main deck beams with their assorted knees. I'll fix these in place before fitting carlings and ledges, as I did with the lower deck. The problem is that this is a very complicated part of the build because simultaneously with building the main deck, you must complete the chain pump crank mechanisms and their supports, which are attached to the mean jeer bitt, the topsail bitt and 4 columns between the lower and the main deck. I started with the bitts. Here are 4 vertical timbers that will make up the two bitts, with their simulated sheaves and rabbets for the cross pieces. Here they are before trimming, and without poly. I toyed with the idea of making the cross pieces out of contrasting wood, but I think that may be taking the concept too far. What do you think? 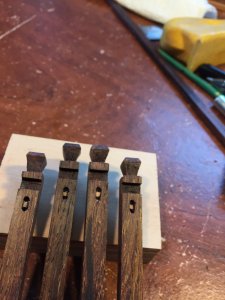 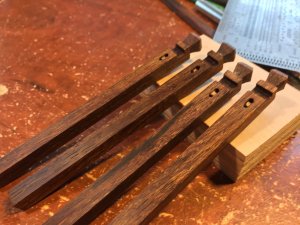 Again unbelivable work Dave glad you are starting up again so am i, looking forward to your work so I can follow it and learn from your work. Don
D

my mistake on the lower deck framing was not leaving a gap but the opposite adding a piece as i misunderstood the plans an explanations much better on the main deck framing, also decided to do exterior planking almost to the keel because i do not like the way that i did the frames so i will cover it up should be OK, will start posting on the blanford the begining of the week. Don

Doc did you see my post on the flatie, I got another type of model off ebay just a little more then the flatie i am going to do the same type of build on this one it is totaly different then the flatie this will be for Christmas for my oldest son. Don

Hi Dave, I think you should use bloodwood for the cross pieces so the bitts look like one unit. Keep up the fine work.
Mike

I agree Mike. They need to be the same wood to look like a unit. That's actually rosewood. 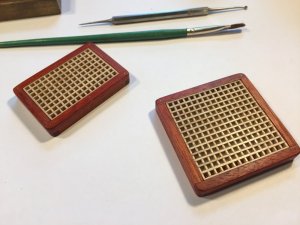