these little steam powered engines were called "doctors" because they were used for different tasks on a steam powered river boat or in a factory.

All three of these programs will interchange the same drawing.

All my drawings are done in the scale of the model, doing a drawing in full scale creates to big of a file and slows down the regeneration and rendering. There is no need to draw so big because no matter how far you zoom in the drawing the lines look the same and not like zooming in on say a JPEG image where the image breaks up into pixels.
I can also take each part and create a separate file then assemble all the parts into one final drawing.

The concept here is to create a 3D model and animate it so all the moving parts will move. Then I will have the parts printed and build a working model of the engine. Once I have the pump engine done then I will move on to the 2 engines that turned the paddle wheel. Rather than steam the model will run on a simple small air pump used for fish tanks.

First I trace the part then use that tracing and refine it and add details. 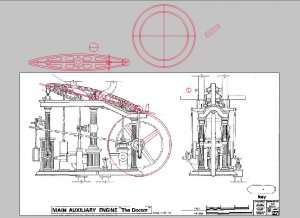 
here I did not need to trace and draw the base all I had to do was take measurements from the master cad drawing. The side of the base has a nice molded edge so that I did in the 3D program 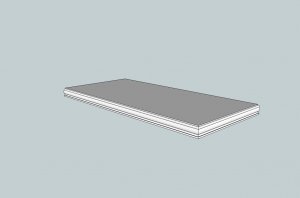 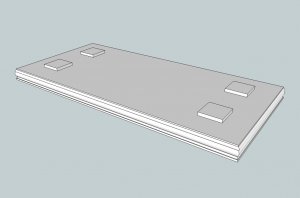 taking a 2D drawing of the steam pump and understanding what I am looking at and how it works I first construct a crude model of the structure. I do this because it takes a lot of time to add various details and if it is wrong I wasted time and I have to redo it.
The first image is a crude drawing of the framework. 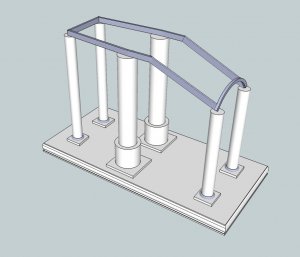 in the above image I did not take the time to create details in the columns below I did a fluted column. The end will be an animated graphic as well as a working model. So once I am sure of myself I will go back and refine the drawing. 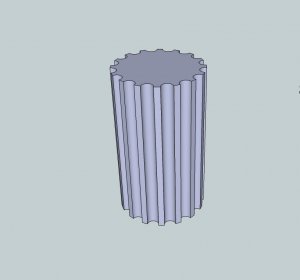 I am selection parts and drawing them in 3D 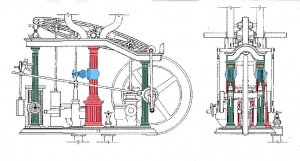 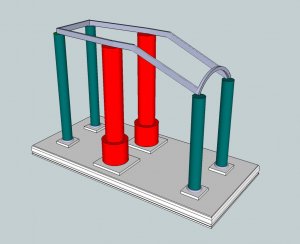 G'day Didit
I just found your log. I do not know what we were talking about, but I take it you are going to make a working 3D model of this engine in the computer and then print it, so you will have a working 'hands on' model that runs on air.

Amazing and mind boggling at the same time.​
Are you planing to make the whole paddle steamer that works?
If so, this will a mammoth undertaking.
Havagooday and happymodeling
Greg

G'day Didit
I just found your log. I do not know what we were talking about, but I take it you are going to make a working 3D model of this engine in the computer and then print it, so you will have a working 'hands on' model that runs on air.

that is the goal here to create the parts for a working model. 3D printing and resin castings have very tough materials that will allow a working model to be built.

first I have to teach myself how a cira 1850 steam engine is built and how it runs, this is at a level of model engineering so there is a lot of research to be done.

Are you planning to make the whole paddle steamer that works?

no what I am thinking is cross sections of ships in the early years of steam power. A static ship model cross section but the engine and paddlewheels will go around and around when hooked up to a little fish tank air pump.

If so, this will a mammoth undertaking.

the more I work in 3D modeling the faster I get and the actual printing is done by someone else and she is really good at adding finer details so all I need to give her is a rough out part.
Model steam engines and live steam and historical collections of steam power is a huge community and I have made a lot of connections to help me out.

Amazing and mind boggling at the same time.

I agree now that 3D printing and laser cutting and 3D modeling is the state of the art it truly is amazing and mind boggling what can be done.
There just might be cross sections ship kits with working machinery.

G'day Didit
You're being too modest for your own good. I was referring to your knowledge of these programmes.
Havagooday mate
Greg