Does anyone know the answer

Often on the first rates they used several cabins, Admiral days cabin, Dining room and also sleeping room.
You can see this very good at the HMS Victory 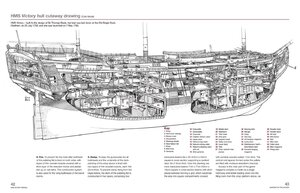 The HMS Hibernia (110 guns special built) was build later (launched 1804), but the drawings were drafted already some 10 years earlier. I guess you have the drawing from this page of the NMM.... so we can not be sure, how the cabins were installed when she was launched or commissioned.

And I guess, that the cabins were during her 100 years of service several times revised.
She was used led the British escort of the Portuguese Royal Family during the transfer of the Portuguese Court to Brazil and also as transport of convicts to the colony of New South Wales.
Afterwards HMS Hibernia was flagship of the British Mediterranean Fleet from 1816 until 1855, when she became the flagship for the Royal Navy's base at Malta and stationed in Grand Harbour. She remained in this role until she was sold in 1902.