I've been working on drawing or lofting if you like plans for a Danish Bomb Vessel. From the research I've done the plans could be one or all of six ships produced in 1771. 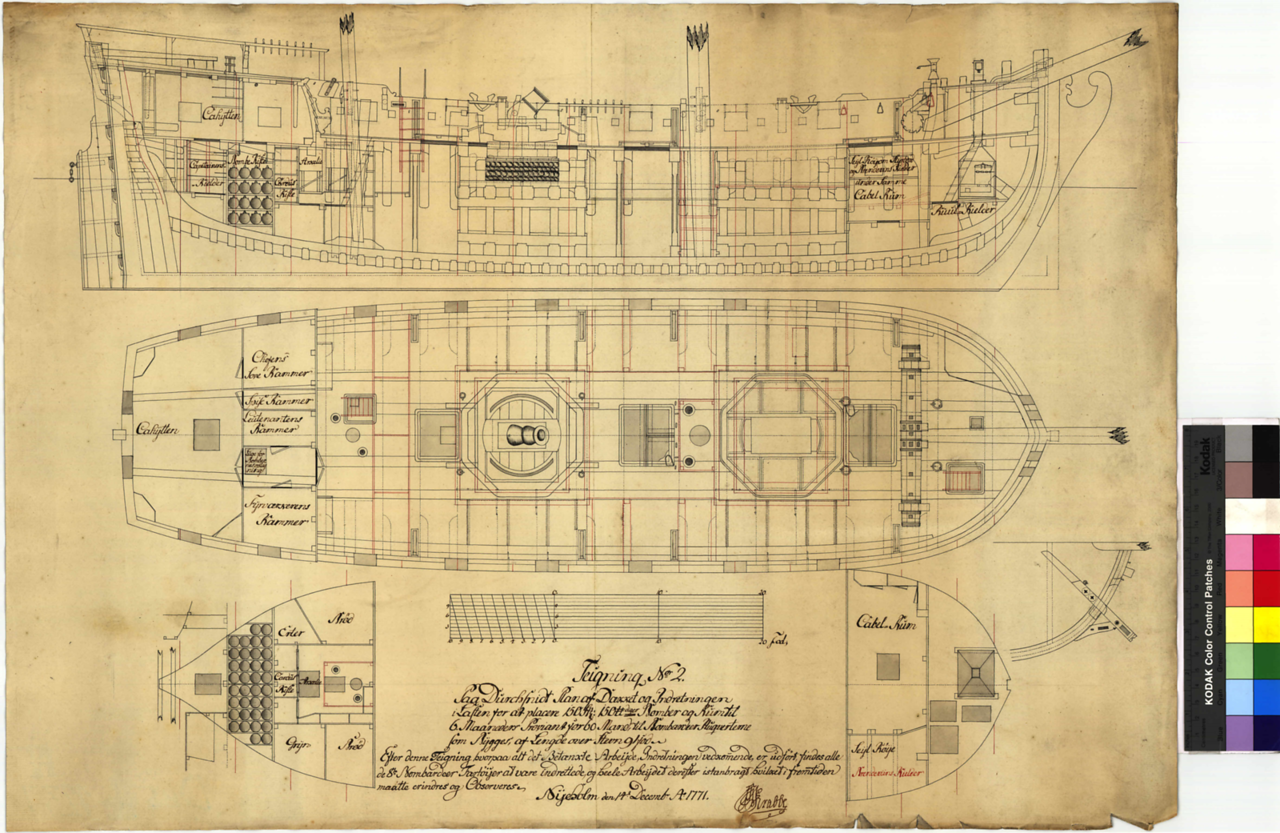 I don't read Dutch or Danish whichever is correct (I don't even know that). So I've been struggling to interprate the writing on the plans. Any help with that would of course be appreciated. A big part of the problem Is I'm too inept to even figure out how to type the non English characters.

The first and biggest question is about the number of guns this ship was intended to carry. Clearly there are 2 Mortars listed on the plans as 100 pounds. According to all the information I've been able to find from other sources they appear to have actually been equipped with 1-100 pound mortar and 1-150 pound mortar.

Where it get much more murky is I've found references to four 28 gun bomb vessels and two 16 gun vessels.

I believe the two lines below the Mortar read "6 pound cannon-10, or 8 pound or smaller caliber howitzer - 10 So ten cannon of some type. 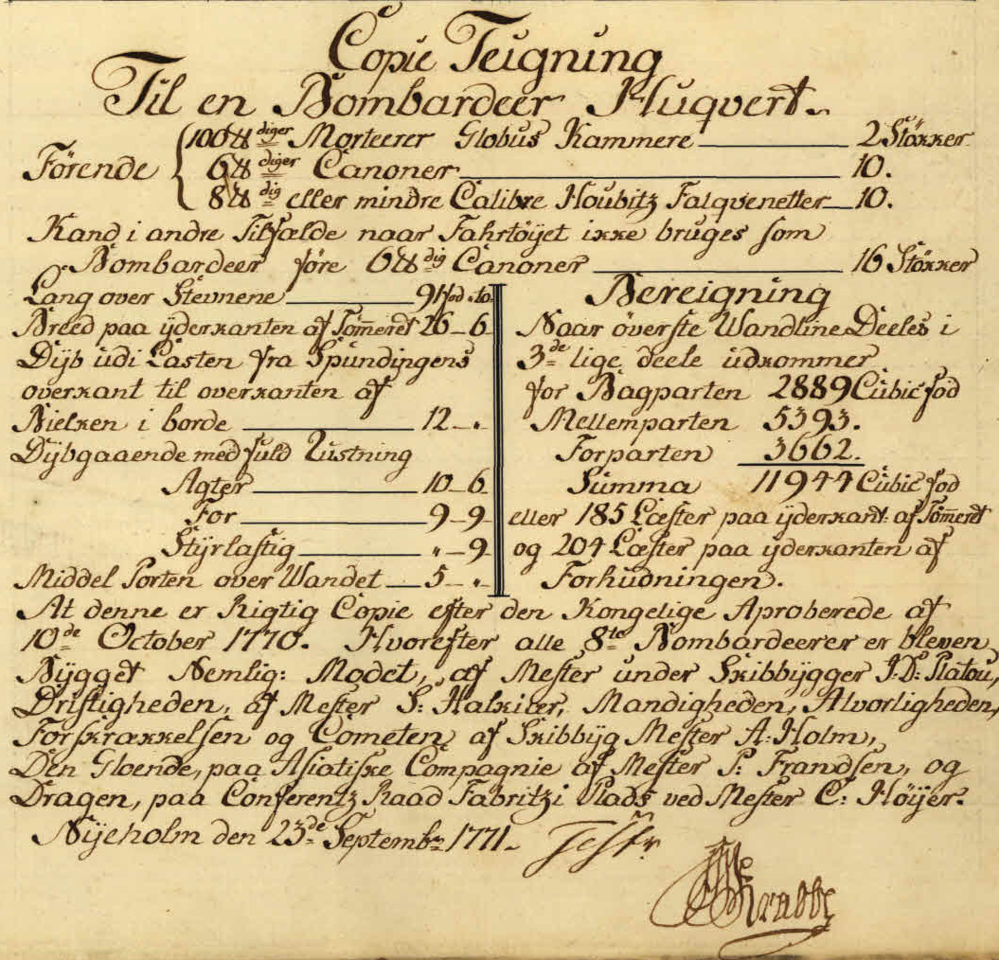 The next question I have is about the Mortars. In the plan below the mortar appears to have a base that was cast with the barrel. This is consistent with what I found in the Danish Arsenal Museum.

The earliest Danish mortar I could find that did not have an interal base was 1849, and the closest I could find to the year of this ship was around 1750 and still had an integral base.

That being said in the image below there is some sort of lever behind the mortar on the plan. My guess is it's not part of the mortar it's on the gunwale behind it. It's similar to the other items I circled in magenta. Question then is does anyone know what these are?

I have several other questions as well one is about how the planking would terminate on the rear of the ship. I drew the plan below and I'm a little stuck on what the stern would look like relative to the planking below the trim under the gun ports. Best I know how to phrase the question is would there be a portion of flat transom exposed on the back or would the planking under the strip come all the way up from the bottom? The approximately 93 foot (91 fod) gundeck by 27 foot (26-6 fod) beam makes for a pretty stubby hull to get the planks all the way to the keel.

I've been working in Autocad to produce my plans. It's time consuming but not as difficult as I thought it might be. Just thought i'd throw these in to show I'm really planning on building this.

I'm planning on building this Plank on Bulkhead and I'm well on my way to having workable plans for the hull just trying to get some of the details figured out. I can guess but would like to get as much as I can correct. Here's my frames and keel layout so far. 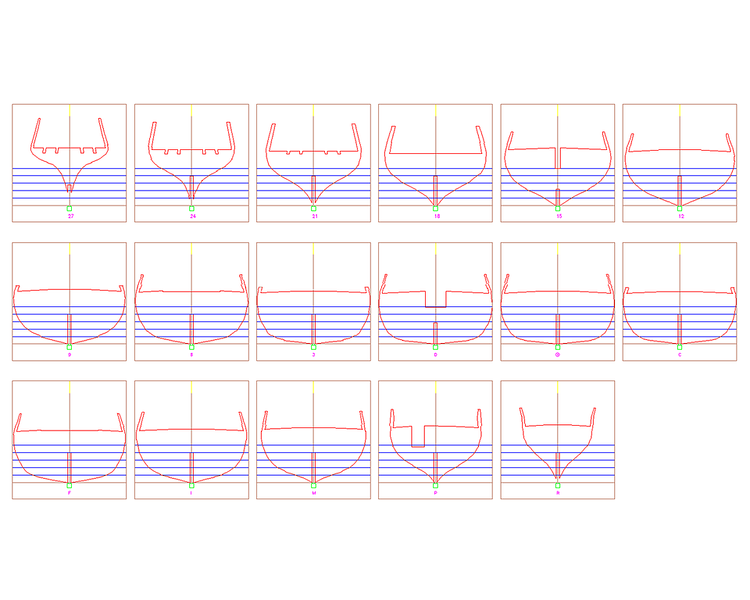 I will be following this one. Don

Quite challenging, and in the same time interesting project! I will follow as your build progress!

Looking forward to your build.

Nice! Which Dutch archive did you find the plans at? For what it's worth, I have found DeepL:

DeepL Translate
does a much better job of translation than other machine translators, even with archaic language. With the Erebus and Terror recently found there is more and more information on bomb ships turning up.

pebbleworm said:
Nice! Which Dutch archive did you find the plans at? For what it's worth, I have found DeepL:

DeepL Translate
does a much better job of translation than other machine translators, even with archaic language. With the Erebus and Terror recently found there is more and more information on bomb ships turning up.
Click to expand...

I think its Danish

Danish is correct I finally figured that out.

I've now discovered there were actually 8 of these built. THe other two are the Modet (Courage) and Forskrakkelsen (Fright). Intesting names when translated. I also figured out the stern it has a wing transom with a round tuck. There are 7 beams just forward of the sternpost that make up the lower portion of the transom so the planking makes a pretty tight turn on them that was the detail I wasn't understanding. The top one is the wing transom and should match the back of the gun deck plan in the middle of the first photo I posted.

Are you planing to build her fully rigged?

Hallo and many thanks for starting this very interesting topic - I will follow with big interest.
Maybe Karl Ingwer alias @kalliboot can help (he is living very close to the danish border) or knows somebody able to translate this correctly.
Or maybe @A.schmidt who is danish - he was one of the team which found the wreck of the Printz Friderich

Uwek said:
Hallo and many thanks for starting this very interesting topic - I will follow with big interest.
Maybe Karl Ingwer alias @kalliboot can help (he is living very close to the danish border) or knows somebody able to translate this correctly.
Or maybe @A.schmidt who is danish - he was one of the team which found the wreck of the Printz Friderich

This is definately Danish.

Zoltan; yes I'm planning on building it fully rigged. One thing that really got me excited about this particular ship is there are original plans for the masts and sails as well as quite a bit of information about the ship itself.

A member on another forum cleared up the number of canon issue. The plans spell out basically 3 different loadouts for guns depending on what the current mission of the ship is. If the ship is not carrying the mortars it can be equipped like a typical 16 gun would be. with the mortars the canons near the morters would be removed and likely replaced by swivel guns. The 8 pound or smaller caliber is in reference to swivel guns. Because, as I understand it, it wasn't uncommon for the actual mortars to be on a larger ship or tender for transport they would swap the mortars for regular canons in transit.
W

It's Danish and I can understand most of it though the cannon details can be a problem. I'll translate it for you asap.
William (Denmark) 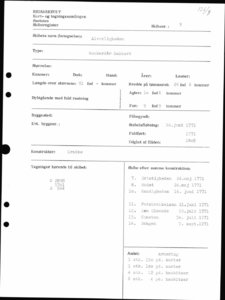 This is much easier to translate. Hope to do it today
William (Denmark)

I've managed to find 42 plans for this class of ship. There's quite a bit of duplication due to the 8 different ships.

The Dristigheden was linked to by far the most. I haven't figured out how to do the search myself, it's been thanks to a lot of nice people on these forums. The Modet is the only one I haven't seen the links to other drawings.

I'm really kind of leaning toward building it as the Alvorligheden which according to my translator means "Severity" in English. The burning question I have now is what would the figurehead likely be of. My best guess would be either a Wolverine or Badger (brok). Of course no surprise if I'm way off there might be a bear.

Here's a couple plans I didn't expect to find.

Thanks to everyone for the assistance.
K

I'll pull up a seat and watch with interest
W

Some notes on the Danish drawings.​
1) The names of the ships:

’Mandighed’ - Manly (though this is an adjective – the true noun is not found in English. I suppose ’Macho-man’ would be a modern equivalent??)

‘Forskækkelse’ - Frightening’ (though again an adjective is the only word I can think of. It is probably understood that the enemy saw the ship as frightening!)

‘Alvorlighed’ (The) Serious (‘en ‘ and ‘ed’ are definite articles in Danish)


The type written notes from the National Archives​
Ship no. 9

I had to look this one up:’A lesser north european freight or fishing vessel common in the 17th.C. The hull was round ‘gattet’ (the same form both ends but with a quite flat bottom (keel) and therefore drew very little water. It was usually two masted: the first a full-rigger mast which stood quite some way back on the ship and a lesser ‘skønnet’ mast ( schooner-rigged mizzen mast) and a bow sprit with a long standing jib'.

That’s all from the type-written description. The figure heads are too small to discern. Would be interesting to see if I could ‘decipher’ them. They could be attributes as used on the statues of saints?

William, thanks for the info. A lot of the figureheads make sense with those translations.

‘Alvorlighed’ (The) Serious - The one I posted above. I'm think it's a wolverine by the head shape and large paws. 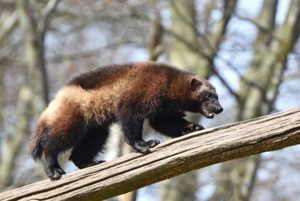 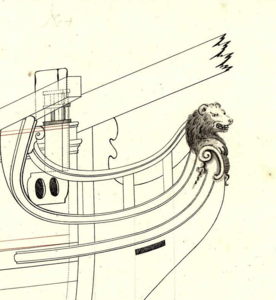 Glad to be of help. The figure heads seem to fit your interpretation - well done!. Of the other drawings, one of them is for a collapsible galley for a crew of 90. By the way a Danish foot is a fraction bigger than an English one and the same with inches. Nothing to bother you in the building of your model. If there's anything else I can be of help just let me know.
William
You must log in or register to reply here.
Share:
Facebook Twitter Reddit Pinterest Tumblr Email Share Link
Top