Way back in 2000, I visited New Zealand and had the chance to look at the preserved remains of the Edwin Fox at Picton. I took photos, but as I wasn't interested in building model ships at that time, the photos are more general than specific for modelling purposes. A selection is below. It is interesting to note the external planking of the hull - double planked, with the second layer being vertical amidships and then fanning out fore and aft. The hull was also coppered and one photo clearly shows the difference in appearance of the copper plates depending on whether they were above or below the waterline. Internally, there is a lot of iron bracing.

The following text is courtesy of Wikipedia.

Edwin Fox is the world's second oldest surviving merchant sailing ship, and the only surviving ship that transported convicts to Australia. She is unique in that she is the "only intact hull of a wooden deepwater sailing ship built to British specifications surviving in the world outside the Falkland Islands". Edwin Fox carried settlers to both Australia and New Zealand and carried troops in the Crimean War. The ship is dry-docked at The Edwin Fox Maritime Centre at Picton in New Zealand.

She was built of teak in Calcutta in 1853 and her maiden voyage was to London via the Cape of Good Hope. She then went into service in the Crimean War as a troop ship, and later carrying passengers and cargo.

In 1856 she began her first voyage to Melbourne, Australia, carrying passengers, then moved to trading between Chinese ports. In 1858 she was chartered by the British Government as a convict ship bound for Fremantle, Western Australia.

In 1867 she was converted from a full-rigged ship to a barque, and from 1873 served on the emigrant route to New Zealand, making four voyages.

Edwin Fox was overtaken by the age of steam, and in the 1880s she was refitted as a floating freezer hulk for the booming sheep industry in New Zealand. She was towed to Picton in the South Island on 1897 where she initially continued as a freezer ship, before being further dismembered in 1905 when converted into a coal store hulk. By this time she had long since lost her rigging and masts, and suffered holes cut in her sides and the removal of most fittings. The ship was in use until 1950, then abandoned to rot at her moorings.

In 1965 she was bought by the Edwin Fox Society for the nominal sum of one shilling. In 1967 she was towed to Shakespeare Bay where she remained for the next 20 years. After much further fundraising the ship was refloated and towed to her final home, a dry dock on the Picton waterfront. She floated in and the dock was drained to begin restoration.

Initially it was planned to restore the ship completely, replacing rigging and refurbishing the interior. It has since been decided that this is not practical, not only for reasons of finance but because the timbers required are no longer available. She is thus preserved as a hull with an adjacent informative museum. 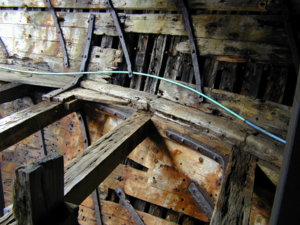 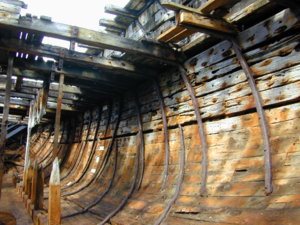 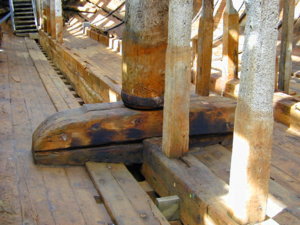 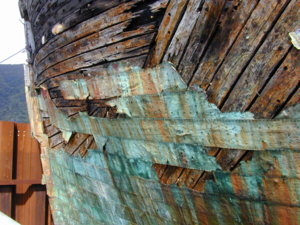 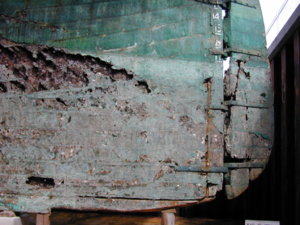 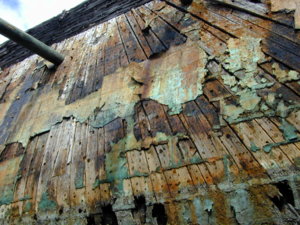 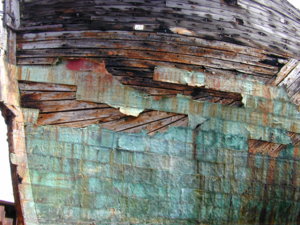 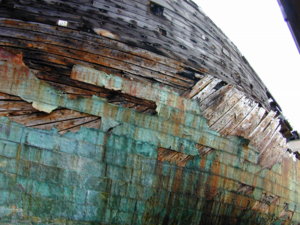 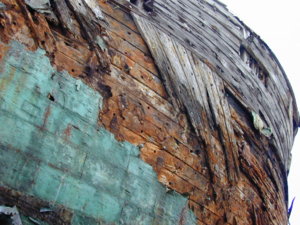 and also this one: The Edwin Fox, now being restored in Picton, has seen a lot of history since she was built for the East India trade in 1853.

Me - Inside the remains of the East Indiaman Jhelum, completed in 1850!
Bob 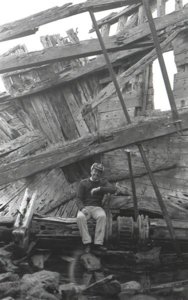 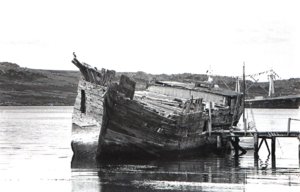 Jhelum model showing how she may have looked on arriving in Stanley in 1870, damaged and leaking after failing to round the Horn.
Bob 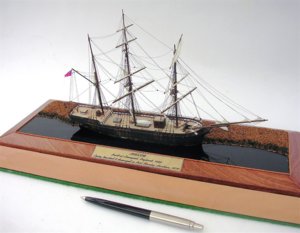