Does this word includes masts and sails, or only ropes, blocks, deadeys, hearts etc.? Am asking because the greek word for this seems to be different..

Messis said:
Does this word includes masts and sails, or only ropes, blocks, deadeys, hearts etc.? Am asking because the greek word for this seems to be different..
Click to expand...

I would say that rigging does not include the masts, yards and sails.
Therefore f.e. James Lees named his book also in such a way

An other cornerstone in each private library describing the mast, spars and the complex rigging work should be The Masting and Rigging of English Ships of War, 1625-1860 By James Lees Publisher: Naval Institute Press; 2nd Rev edition (October 1984) Pages: 212 ISBN-10: 0870219480...
shipsofscale.com

I checked also the definition which is mentioned in wikipedia:

Rigging comprises the system of ropes, cables and chains, which support a sailing ship or sail boat's masts—standing rigging, including shrouds and stays—and which adjust the position of the vessel's sails and spars to which they are attached—the running rigging, including halyards, braces, sheets and vangs.

Etymology
According to the Encyclopædia Britannica Eleventh Edition "rigging" derives from Anglo-Saxon wrigan or wringing, "to clothe". The same source points out that "rigging" a sailing vessel refers to putting all the components in place to allow it to function, including the masts, spars, sails and the rigging.

I also checked and Uwek is right rigging does not include the masts and spars just rigging line and chains.

the tern rigging also is used when moving heavy and big objects when pullies and chains or ropes are used.

Thank you both very much. I went further investigating the greek word... that is "εξαρτισμός" (exartismos) and it seems that except ropes, chains and cables some times it can include masts, yards and sails. Never the less the most respectful greek linguist Prof. Mpabiniotes doesnt include masts, yards and sails in the word, but points out that including masts and yards (never sails), can be "an additional meaning" or "variation" of the word.

Ofcourse the greek bibliography is very poor in comparison to the english but still I came to the conclusion that where masts yards and/or sails are included in the greek word is wrong.

That said I believe the definition of the english word rigging as you both presented above is definitely correct. I think in the ages of sail the english language was historically the one ahead in defining the terms and words. On the contrary in the greek spoken naval happening the linguistic evolution was poorer. So undoubtedly the correct definition belongs to the english word.

So the english definition prevails and determines the greek word . No sails , no masts nor yards in the definition regardless the language.

Guys thank you again for your help. I believe now I am more confident about the meaning of the word in english and greek.
Last edited: Sep 24, 2019

During the time, the technology of ships changed and got much more complex.
The complete "masting" and "rigging" was developed and a lot of new parts and elements were tested and added.
So I am sure, that also new definitions and descriptions, names for certain parts were added to the different languages, partly overtaken from other languages.
Therefore the definition for "rigging" had to be adjusted over the time.....

Yes @Uwek fully agree. But please let me insist, english and then french language were dominant in those ages. Also Dutch, german etc but not greek. Ofcourse greek language has its very strong influence in other fields such as medicine.... and other sciences related with the antique times.
But not in naval.


Although Homer 1200 bc in Ilias mentions the ship blocks naming them as "apples" or also other words as άγκυρες (anchors) etc in the antique time of he biremes, the triremes , the olkas and so on.
Last edited: Sep 24, 2019

In german is otherwise:
Masts are included in the word...

The same apples in french. Rigging in german greek and french seems to include masts and yards. Some times even sails. In english "masting" its a separate meaning of its own, out of rigging!

I still believe that the meaning of the english word its more accurate historically and ofcourse also technically (engineering wise) .

Masting can stand as a mechanical unit or engineered item (system), by its own. Studied, designed and produced as a whole.

The same applies for the ropes, standing and running rigging. They can both, or each one by it self, consist a system. Lastly yards and sails could eventually seen together as a mechanical unit.

Ofcourse and thats again true, all together, masts and ropes and even yards do present a mechanical system for the diversion of a sail ship... the question that appears then, is. what about the wheel and the rudder, what about the anchors? Dont they belong also in rigging? If so, is then rigging the navigation system?


Note: All that can only be discussed in the context of a specific historical (naval) period. In this case the "Age of sail". That is said having in mind what @Uwek so accurately concluded above: 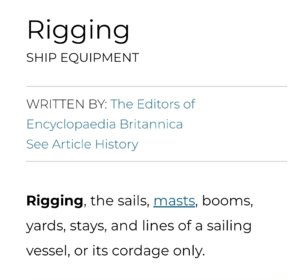