Hello, mistakes are unavoidable, unfortunately. Fortunately, they teach us to think 'out of the box' and make us experienced. like today, you made your own stem, I mean you made it from scratch, and made it well! Don't you proud of yourself?!

For others, it doesn't have to break to make new part. They make a new one because they don't like the one supplied with kit. You made yet another step in to a different world of modeling - a scratch build! Congrats!

@Jimsky
Thanks for the input. Definitely will keep at this.
Maybe another model ship kit or two and then try a scratch build, maybe.

In preparing for the second planking I came to the realization that I do not have enough planks .

So I'm in the process of how best to complete this 2nd planking.
I do have some extra 2X4X600 sepelli wood(maybe 4) that I could mill down to .5X4X600.
As well, the plans call for 2 lower wales on each side. I could forgo the 2nd planking under those sections.
Either way, the count is tight and I don't have much wiggle room.
I measured 20 planks for each side and i only have 37.
Of those, about a dozen have a significant side bend.

While pondering how to resolve my 2nd planking I noticed something interesting on the box top the model came in.
Check it out, see if you can guess what I'm talking about. 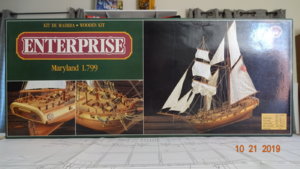 Back at it again.

Working on the top rails for the model.
The plans call for laminating 3 2X2X600 pieces of wood together and gluing on top of the hull planking previously built.
Since I'm using my own wood for this part, I needed to mill the pieces.
Here's the result.... not perfect 2X2X600 but nothing sanding can't resolve. 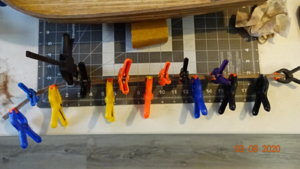 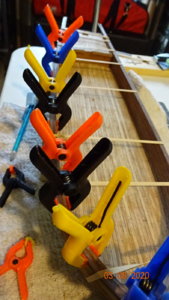 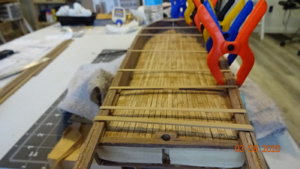 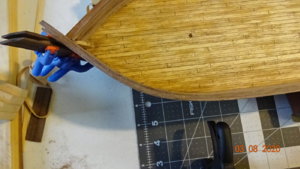 Not to hard, the key is to soak the 2X2X600 pieces then combine them (3 pieces each) and put in a jig to bend to the appropriate curve.
Notice that I added supports on the Stem to hopefully keep me from breaking it again. So far it has worked.

That's all I have on the top rails.

Resolving the 2nd planking shortage issue.
In case anyone hasn't noticed from the original box image above, the hull planking is 2 tone .

I went to the local Home Depot and picked up a piece of poplar wood.
I was looking for something about 6mm thick, at least 600mm in length and 5 or 6 inches wide.
Having the width under 6 inches allows me to fit the wood in my mini planer.

The piece I ended up with was twice as long as needed so I cut in half. 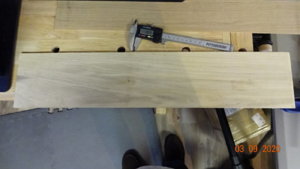 Thickness was right in range. 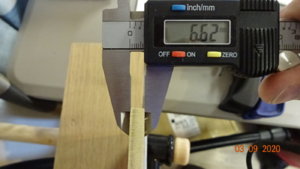 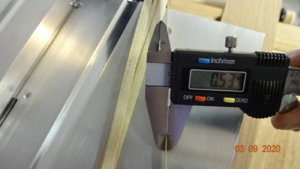 Next I tested the look on the ship. 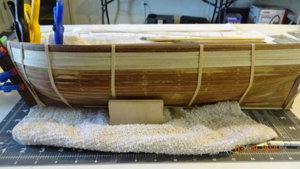 What does everyone think?

At first glance I'm happy with it.
I'll see how it works out once I start gluing the pieces on the hull.

Next on the list is making the lower wales.

Rowboat said:
What does everyone think?

(or two thumbs UP)! Personally, I love make a distinguishing colors between the above and below gunwales. While it is not the rule, we can see this on many contemporary models. At the end , it is the only your decision.

One other thing I completed, cutting the hole for the spirit mast in to the front of the hull.
Didn't drill with an electric drill.
I used round files and sandpaper.

In the beginning, the front part of the main keel that rises up was a confusion point for me.
That is to say, does that piece stay in tack or eventually get sanded down.
A few times when building up the hull, above deck, I thought about removing it.
Here's a picture of the piece I'm discussing. 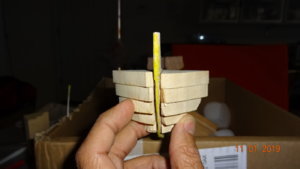 The plans never actually call out that this piece is for holding up the spirit mast and being a novice I just wasn't sure.
Now it appears to me that the spirit mast rests on this piece and it helps set the angle of the mast.
Maybe I'm wrong but that's how I used it. 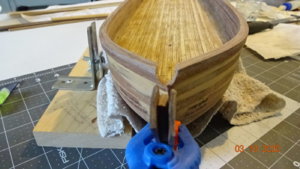 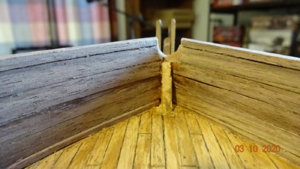 @Jimsky
thanks for the thumbs up (or

).
I agree, I like the look of the two tone hulls and it solves my issue.

Working on the above "lower wales" section of the model.
Milled a few pieces of popular. 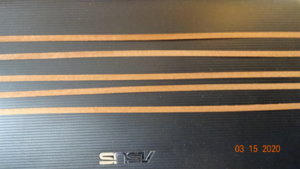 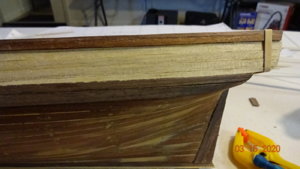 The manual called for a smaller piece where the wales meet the last 2nd planking. I think it was 1mm X 1mm. 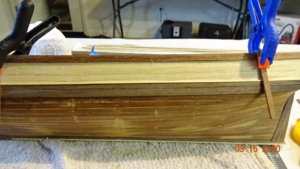 A clearer picture of that last piece. 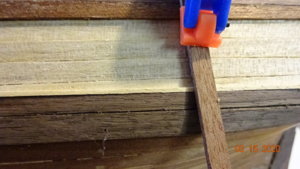 I think it looks pretty good. I might mill some thinner pieces (.3mm) to put on as a 3rd layer.
Just depends how much gets sanded off later when I smooth and level that section.
Popular is not as dense a material as the sepelli wood that was originally supposed to be in that section.


Next I start the 2nd planking below the lower wales.

So, I'll start with some excuse as to why I did what I did.
Hmm, that's never a good way to start a post

I laid the lower wales in a fairly level line, that is, not curving the bow area up.
When I laid my 2nd layer planking I measured down about 6 planks and let it lie as it was.
You can see my measurement if the image is enlarged. 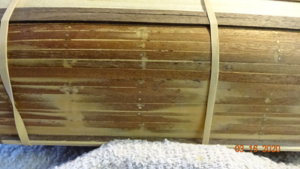 This resulted in the plank butting up against the lower wale where it meets at the bow.
No bending , just let it lie naturally. 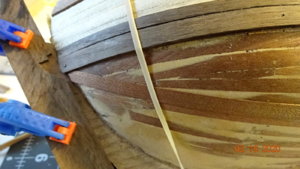 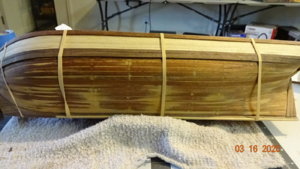 A view of the stern area. 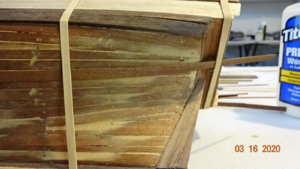 Some modelers may be gasping (or laughing) at how I laid this as there is no way 5 more pieces of planking is going to fit in the bow area. .
I guess I should have mapped this all out from the beginning and I thought I did.
Here's how it looks after a few planks (which took at least a week of work). 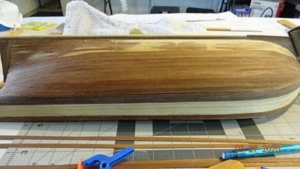 A closer look at the bow. It's a little blurry but one can see that some planks run into the lower wale.
Not sure if this is the correct way a ship is built ( my guess is NO) but this at least resolved my issue. 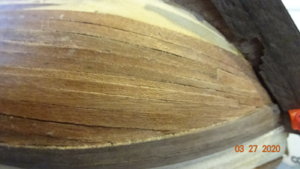 Finished the port side planking (well almost).
Here's the pics. 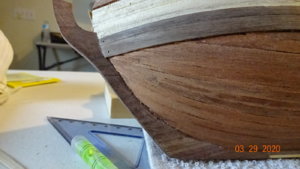 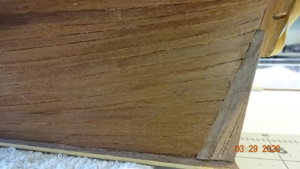 Anyone have thoughts on how it turned out?
Should the lower wales have been done differently.
Looking at the images from the blueprints I thought I put the wales in the correct place.
Seems, to me, it looks odd that the lower wales and above looks straight but everything below curves up at the bow.
The stern looks okay to me.

@Norway
@Pathfinder65
Thanks for the encouragement.
Having to mill all these pieces is time consuming.
I guess in the end I'll have that as an experience for future builds.