Does anyone know the history of footropes used on yardarms for topmen to be able to work with both hands on the sails? When did they come into use, and in which countries ships were they first used? I saw a fellow from Germany (Eddy) installing footropes on HMS Sovereign of the Seas, but I doubt that they existed that far back.

Footropes came into use on the lower yards after 1640, on the topsail yards after 1680, and on the remaining yards around 1700, with the exception of the crossjack yard, and also the lateen yards and gaffs. Wolfram zu Mondfeld, Historic Ship Models, p. 230.

Harland’s Seamanship in the Age of Sail says something similar. The 102-gun British warship Sovereign of the Seas, launched in 1637, was one of the first recorded vessels with footropes, but on the main yard only.

Before the footropes were introduced, topmen would simply run out along the tops of the yards, then sit astride the yard when reefing sail. That would seem to be easier on the thick lower yards than on the much thinner higher ones, so I don’t know why footropes were introduced on the lower yards first. It might be because, before the late 18th century, the topsails and topgallants would normally be furled at the first sign of approaching foul weather and not set again until the wind moderated, while it might be necessary to take in or let out reefs on the courses (lower sails) in the middle of storms and high winds with the ship rolling crazily. Later on, it became common to weather storms under one or two tightly reefed topsails and a jib only, but that was sometime late in the 18th century, long after all the yards had footropes.

Lausanne’s The Great Age of Sail, showing a sailor sitting astride and furling in the old way. 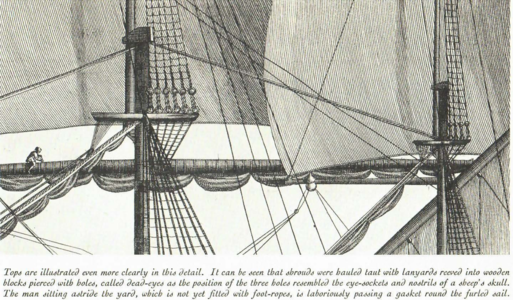 Thanks, Jimsky! When you say "main yard", are you talking about the main course yards for which masts? Just the main mast?

DARIVS ARCHITECTVS said:
Thanks, Jimsky! When you say "main yard", are you talking about the main course yards for which masts? Just the main mast?
Click to expand...