The minute I came across this kit by Lindberg, I thought how perfect this could be made to look like the Jenny from the movie, forest Gump. After looking at a few movie stills and watching countless times the boat scenes from the movie, I finally completed this build. I started work in March of 2019 and had to step away for several months due to a surgery, but I finally crossed the finish line as of May 25, 2020.
I used some styrene sheet and strips to create my stern wheel assembly, the storage compartment under the exhaust stack and the anchor at the bow. I altered one of the figures from the kit to look like Lt. Dan. I also built up his hair with white glue and used some red string as his headband.
I added the toilet seat, broken chain and crud onto the deck as Gump's 1st attempt to catch shrimp. I added a HO scale barrel and some stacked cans behind the cabin. I also installed a 3mm LED light by EvansDesign to the inside of the cabin. My big achievement was the wheelchair. I totally ruined two attempts t make my wheelchair. My wife offered her talented service and created a wonderful wheelchair of Lt. Dan's that sits at the stern of the boat.
The hulls appearance was created by using sea salt and hairspray while applying layers of paint. Final step was using green weathering powder on the hull to simulate algae buildup. Everything was sprayed with Dullcoat to seal.
The netting was made by dying tulle to a dark green and then sowing 3mm red beads for floats to the seam along the tulle. Chain and line were hooked to the netting doors and attached to the rigging.
All in all, this inexpensive kit turned out to be a real gem. I'm very happy with the way she turned out and I look forward to my next project. Many thanks!!! 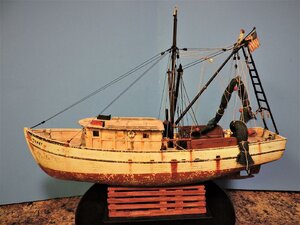 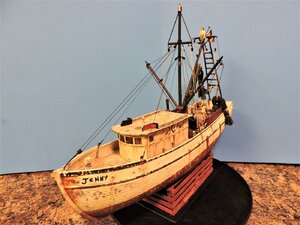 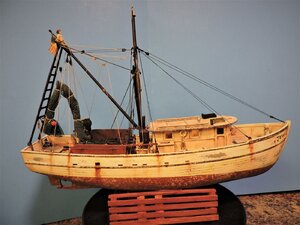 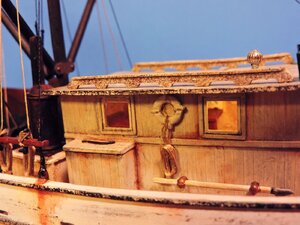 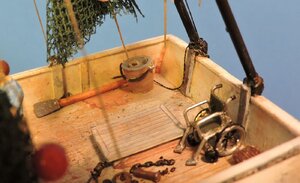 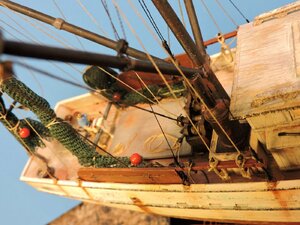 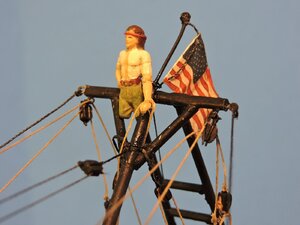 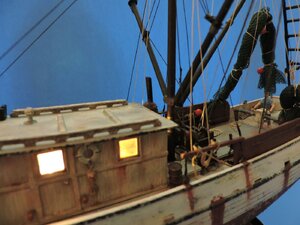 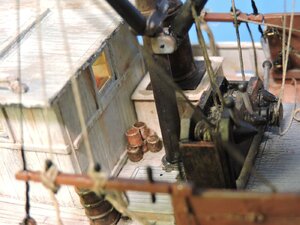 Pawley - Sorry I'm so late in thanking you for your comment. I tried to make her look like the movie's boat. For such an inexpensive kit, I had so much fun putting her together. Smooth sailing to you , good Sir

I am so fortunate to have the SC Maritime Museum within 15 miles of where I live. They presently have two models of "Jenny" on display that were built by Tom Boozer. See the write up below. He will be at the museum on October 10 and I am hoping to go and see his presentation. He is local SC model shipwright and I have been following him for years. His work is superb.

Tom has exhibited his model boats many times at the Georgetown Wooden Boat Show and several of his models and dioramas are on permanent display at the SC Maritime Museum. He is South Carolina’s most widely recognized and talented decoy carver actively working in this field since the 1970’s.

“Boozer is also known for museum-quality boat models, from tiny replicas of old market-hunting craft such as punt boats and battery boats to a series of sought-after replicas of Jenny, the shrimp boat of Forrest Gump fame. He’s working on models of the oyster sloops that plied South Carolina waters in the first half of the twentieth century, and he is an accomplished carver and maker of dioramas, having recently completed an installation of a Lowcountry cotton plantation at the Edisto Museum.”

Here is another article regarding Jenny: October 10th should be a fantastic day for learning about "Jenny." If you are ever over this way you should give the museum a try. Three of my models are on display there. Good hearing from you.

A Tale of Two Shrimp Boats – Beaufort’s Miss Sherri and Forrest Gump’s Jenny
Did you know that the famous shrimp boat from the movie Forrest Gump, the Jenny, was actually a South Carolina boat named Miss Sherri? Learn the history of the Miss Sherri and how she was transformed into Forrest’s beloved shrimp boat. Accompanying the exhibit are two models of the Jenny built by South Carolina model maker Tom Boozer, as well as Jenny boat signs from the movie.
Where is the Jenny? Exhibit tells story of famed Beaufort shrimp boat from ‘Forrest Gump
by Stephen Fastenau , The Beaufort Gazette, September 04, 2020

Tom Boozer knows almost everything about the shrimp boat that was plucked from Beaufort waters more than 25 years ago and set on a course for Hollywood fame. Everything, that is, except where the vessel is now. His knowledge was poured into a current museum exhibit telling the boat’s story. The 55-foot trawler Miss Sherri, then owned by Beaufort shrimper Jimmie Stanley, became the Jenny as christened by actor Tom Hanks’ character in the smash hit “Forrest Gump,” filmed in Beaufort. After the movie hit theaters and piled up awards, Stanley asked Boozer to build him a model.

Pawley - Fantastic information that you have provided. I'm sure you will have a fantastic time at the Museum! I will look into Tom Boozer and his work. Thanks for the tip.
I did some research on the Jenny from the movie and read a couple of articles on Miss Sherri. The film crew did some changes to her for the movie. One big change was to add the stern wheel for better filming of Forest in action. Great movie and a great little working boat. Enjoy your visit!!!

Thanks Fright. I'm sure I will enjoy it. Tom Boozer is quite a guy. I've spoken to him a couple of times re ship modeling. He uses heart of pine that he harvests from the river near his house. He does some really exciting things with the heart of pine. Here are a couple of photos of his work. Have a good day.. 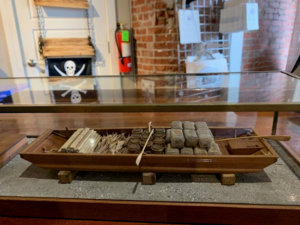 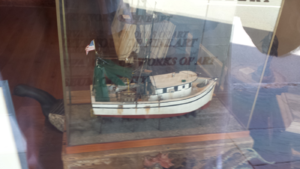 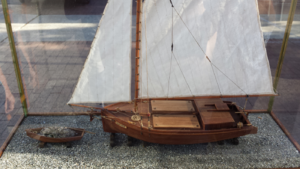 Hey Fright. Check this out.