She was commissioned on April 27, 1700, at the Voronezh Admiralty wharf, and was in service until 1711 as a part of the Azov flotilla. After the unsuccessful Prut campaign and the loss of Azov, the Goto Predestinatsiawas sold to the Ottoman Empire.

She was the first Russian ship of the line and the first ship of this rate built in Russia without any help from foreign experts. 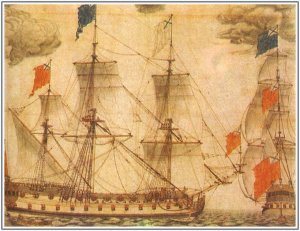 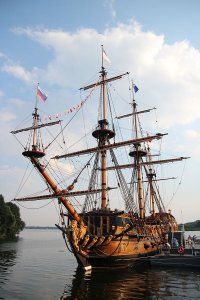 With the reign of Peter I there is a new stage in the development of Russian navigation. The construction of the fleet and the struggle for the free exits of Russia to the sea, the organization of trade with the overseas countries, Peter I paid much attention. He dreamed of a journey across the Caspian Sea to India, a maritime expedition to Madagascar, the achievement of the Northern Sea Route by China and India.
Seeking to turn Russia into a great sea power, Peter ordered warships abroad and developed domestic shipbuilding. He himself studied shipbuilding in Russia and abroad. Attracting educated seamen from abroad, at the same time, in order to create domestic cadres in 1701, he opened a navigation school in Moscow, later transferred to St. Petersburg.

And Peter needed military and merchant ships, suitable for navigation on the open sea in rough weather. Therefore, it strictly forbids the construction of pomor-type ships (piers) in Pomorie, and orders only "new-manned" ships to be built. In the basins of the rivers flowing into the White Sea, there was a lot of drill wood, suitable for building large ships. In addition, Arkhangelsk was sufficiently remote from neighbouring states, and the White Sea was completely the internal Russian sea.
The development of the construction of military ships in Arkhangelsk was important because the ships built here were later directed to the Baltic Sea. Difficult for sailing ships the transition from the White Sea around Scandinavia to the Baltic Sea served as an excellent school for the sailors of the young Russian navy. In 1694, in the summer under the name of skipper Peter Alekseev, the tsar sailed to the White Sea. In the spring of 1696, commanding the "Principium" galley, he descended from Voronezh to the mouth of the Don and took part in the siege of the Turkish fortress of Azov.

October 20, 1696 he conducted through the Boyar Duma the proposal "Marine ships to be ...". This date is now celebrated as the Day of the founding of the Russian regular navy. From 1697 Peter passed the naval service under the name of Peter Mikhailov. In 1697 - 1698 years. he made a great overseas trip, studied shipbuilding and navigational matters in Holland: he received the title of ship master; not being satisfied with the presentation of the case in Holland, visited for further improvement in the ship business and navigation of England. In 1699, in the rank of captain, Peter sailed in the Sea of Azov, commanding the ship "Otvorennye Gates". The following year he established the Moscow Mathematics and Navigation School, and two years later, in 1703, laid Petersburg, made a measurement of the fairway near Fr. Kotlin and pointed out the place to build a fortress. Since 1713
On April 27, 1700, the ship "Goto Predestination" was launched, which in Latin means "God's providence". The idea of building a battleship at the Russian shipyard arose from Peter I in 1691 upon his return from Europe. To this end, he invited several British and Dutch shipbuilders to Russia. But their arrival was delayed, and Peter decided to build it, not resorting to the help of foreigners, according to Russian drafts by the forces of Russian masters and from our material.

The ship was laid November 19, 1698, at a shipyard in Voronezh. By the will of the young tsar, he was called Goto Predestination. Historical materials that have survived to our time show that Peter made drawings of the ship himself, taking as a basis the drawings of the English ship and making many changes and innovations in them. Since the ship was intended for sailing in the shallow Sea of Azov, Peter significantly reduced the draft of the ship, which required finding new proportions to ensure good seaworthiness. The keel of the ship was distinguished by a special fastening device invented by Peter and allowed to preserve the waterproofness of the hull in case of a keel break from impact to the ground. In foreign fleets, something similar appeared only 150 years later. In the work on the ship, Peter helped his companion in the construction of the "amusing flotilla" F.M. Sklyaev and skilful carpenter L. Vereshchagin. The guns for the ship were also cast in Russia at the Demidov factories.

"Goto Predestination" was part of the Azov fleet until 1711. According to the reviews of contemporaries, "Goto Predestination" had excellent stability, it rose well on the wave and was the fastest ship in the Azov squadron of Vice-Admiral KI. Crius, who for 10 years hindered the hostile actions of Turkey against Russia. At the conclusion of the Prut Peace Treaty, Peter I hoped to lead the ship through the Dardanelles to the Mediterranean and thence through the Baltic to Kronstadt, but the Turks refused to allow Russian ships to pass through the fortifications of Kerch and the Bosporus. In October 1711, the transfer of the ship Goto Predestination was sold to the Turkish government in accordance with the Azov Treaty to the Turks.
Last edited: Jun 16, 2018
You must log in or register to reply here.
Share:
Facebook Twitter Reddit Pinterest Tumblr Email Share Link
Top