I have no experience with model building. This will be my very first try so I'm not making this log to show off or to get flattery and likes. My only motivation to make this log is to get critique and advises from which can learn and improve. That and the hope that other rookies can learn from my mistakes and the advises I may get.

So guys, please don't be shy with the criticism. When I have forgot to zip my pants or have gravy on my chin, I would like you to tell me, bluntly and straight from the shoulder. I'm not some HSP fashion designer...or something. No need for kid gloves in this thread.

Now...waiting…waiting! To pass the time I might as well share a cute little story I've just read. The story was written by the young master Peter who had only just learned to read and write, when his schoolteacher requested him to write a short story about ships. The story was written in Danish and unfortunately some of the good points got lost in translation but one or two survived, I hope. Here it comes:

A ship begins at the front and ends at the end. Some ships ends before others because they are smaller. The ship has two sides, directly opposite each other and in the middle is room for the mast. On the mast hang the sails, when they hang there, but usually they are not there, and then you cannot see them.

Up to the mast there are some thin ropes. Only the light sailors (ordinary sailor) can climb up to see if there is still water ahead.

All ships have different names. Most are called "Anna" or "Kate" or "Marie" just like the women next door. She is also a heavy ship, my father says. He also says ships have girl names because they are so expensive to keep in operation.

Before you become a sailor, you are a ship's boy. They live on emigrants and other travelers.

The top is the captain, he tells the others where to sail. He has six aunts (sextant) with him on board. If you do not have it, you cannot become captain. I only have two, but I do not want to be captain.

Then comes the helmsman. He can get the ship to capsize, but that is forbidden. Instead he is looking constantly on the compass so as not to lose the North Pole.

The boatswain has a pipe. It smells good or bad depending on the tobacco quality.

The sailors are also called seamen because they can get seasick. It is easy to cure if one just knew how.

When spoken to, the sailors must be silent and must not answer back. Dad says mom can never become a sailor.
Last edited: Aug 27, 2020

Very funny story, Poul. I will be alert to you build log!!
R

No sprint and rush in this thread Every cloud has a silver lining and one good thing about the long waiting time is that I have steadily, using the Salami method, acquired several model building machines. Today I could not resist a bargain for a second hand DB250 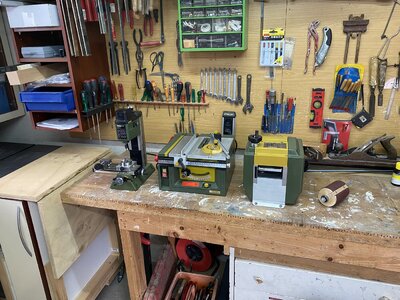 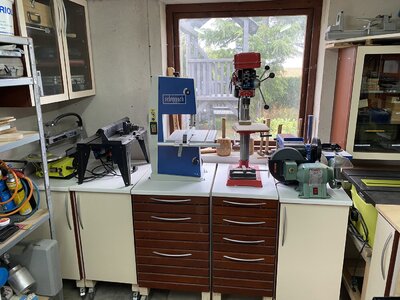 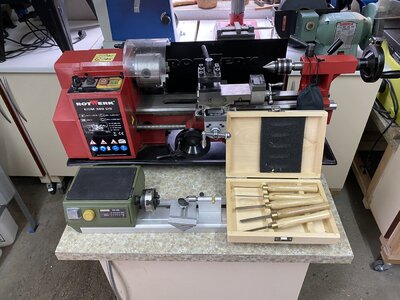 HaHa
we will never have enough tools and power tools ...... it is a law of nature

Almost as good as mine ; a wonky table, a pencil sharpener, half a roll of cello tape and the admirals nail file (she’s not found out yet)

Question: Are you happy with your Scheppach band saw, I've been wondering if I would buy one.

Norway said:
Question: Are you happy with your Scheppach band saw, I've been wondering if I would buy one.
Click to expand...

Sorry, somehow I have missed your post. I do not have anything to compare with so I cannot really judge on this but I think it is okay.

Thanks Poul, I think I'm waiting a bit and comparing it to other available models in different price ranges, regards-