Hello everyone,this will be my next build after the Santa Maria,for now I am just gathering information and doing research on her.Here is a little history.

HMS Ontario was a British warship that sank in a storm in Lake Ontario on 31 October 1780, during the American Revolutionary War. She was a 22-gun snow, and, at 80 feet (24 m) in length, the largest British warship on the Great Lakes at the time. The shipwreck was discovered in 2008 by Jim Kennard and Dan Scoville. Ontario was found largely intact and very well preserved in the cold water. Scoville and Kennard assert that "the 80-foot sloop of war is the oldest shipwreck and the only fully intact British warship ever found in the Great Lakes.

Ontario sank in a storm on 31 October 1780 while underway from Fort Niagara to Oswego. Approximately 130 men perished with the ship, comprising an estimated 60 British soldiers of the 34th (Cumberland) Regiment of Foot, {comprising one officer, 34 other ranks, 4 women and 5 children from the regiment.A crew of about 40 Canadians and possibly up to 30 American prisoners of war.

Sophisticated side-scan sonar technology was used in the search of HMS Ontario in late May 2008. A promising wreck was found between Niagara and Rochester, NY in an area of Lake Ontario where the depth exceeds 492 feet (150 m). The sonar imagery clearly showed a large sailing ship resting upright at an angle, with two masts reaching up at least 70 feet (21 m) above the bottom of the lake. The high resolution images showed the remains of two crow's nests on each mast, strongly suggesting that the sunken vessel was the brig-sloop Ontario. Due to the depth limitations for diving on this shipwreck, a remotely operated underwater vehicle was deployed and confirmed the identity of the ship in early June 2008.

Kennard and Scoville believe that the cold, fresh water of Lake Ontario, combined with a lack of light and oxygen, have slowed decomposition and account for the ship being found largely intact, despite being on the bottom for 230 years.The shipwreck's discoverers have notified the New York State Office of Historic Preservation, however, the exact location of the wreck has not been publicly disclosed. The wreck is technically still considered property of the British Admiralty and as such, will be treated as a war grave. 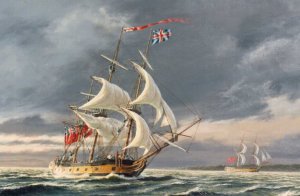 <--- quickly pulls up seat in front row for this one. This is going to be great Zoltan :greetings-clapyellow:

GemmaJF said:
<--- quickly pulls up seat in front row for this one. This is going to be great Zoltan :greetings-clapyellow:
Click to expand...

Thank you Gemma, It will be a long journey, before I start building I need to buy more tools and equipment.I have the book Legend of the Lake 22 gun Ontario by Britton Smith in the book is a set of modeling plans drawn by John Mckay,but I am going to use a different set of plans

I'll keep an eye out for any info on the Ontario Zoltan. I checked the Mclaughlan book, The Sloop of War, it only goes to 1763 so nothing on the Ontario.

Thank you Gemma,I will keep posting what I found so far.

Hello Lawrence ,thank you for visiting my log ,I have plenty of sitting area.

I do thank you for saving me a chair to sit back and watch you build the HMS Ontario, it promises to be a very interesting build. I just love that painting of her under sail, so very graceful, ENJOY.

The plan I am going to use is from The art of Age of Sail website designed by John Andela, hopefully is ready by this summer sometime.

The ships built from the plans look amazing, such a good subject Zoltan. I need to spend some time taking a proper look at the Age of Sail site.
D

Gemma, GREAT Planking job my problem over many build is at the bow it is not the shapping that causes me a problem but GETTING CLAPS TP HOLD THE PLANKS AT THE BOW RABBIT, after many tries with all kinds of bought and self madte clamps have still not fixed that problem happens ever build takes me a lot of time correcting the mess, i use the proportional divider with battrens for my planking and when I ca get wider material to do spilling, works for me, have not done a double plank build yrt LOOKING FOREWARD TO YOUR SECOND PLANKING TO SEE HOW YOU HANDEL THE THIN VENEER, to make it work useing the thin material has given me some thought on how to cut,sand taper etc. looking foreward to yours. DON

Hi Don,just assuming that you responded on the wrong topic,seems like the target was Gemma's Black Pearl,but still wecome at my Ontario topic.
D

OOPS MY BAD ZOLTAN your build interests me also so I got two for one post. THANKS DON........PS looking foreward to your build also interesting project.


Lawrence,at 1:32 she will be around 110 cm overall lenght,but this scale not set in stone yet,I might change my game plan


Lawrence,at 1:32 she will be around 110 cm overall lenght,but this scale not set in stone yet,I might change my game plan
Click to expand...

Yes, that is where I had your HMS Ontario figured out in length, my HMS Victory ts around 47" or 119 CM so this is why I said that she would be a large model. This a very nice size to build as it gives you lots of room to add a very lot of detail. My problem is we live in a rather small home and a model this size demands a lot of space, ENJOY.

Hello Lawrence,the next possible scale is 1/48 or 1/40,but I have a few months to figure this out and of course I want to add nice details.

Both the Ontario and the Royal George were built by the same master shipwright Jonathan Coleman. He was a trained shipwright and served in the Royal yards in England. Both ships seem to have the same style and I would think the same construction. Both were armed transports built for lake service, but it seems the design of the R.G. has a slightly more bend towards a fighting ship a little lower profile and a third mast. Sterns and body plans look very close. I have CAD drawings of both ships in my archives than can be used for plank on frame or plank on bulkhead models. I am more than willing to share whatever research material and drawings I have

Dave this is the type of reasearch that I have been harping on contiunsly. any chance of getting your plane archives to Wayne and Ro for comments and whatever else they can coe up with, another project as if you need more on your plate,you continue to amaze me with your knowledge and it seems like your mind never ceases in bringing up ideas, MAY GOD PROTECT YOU AND YOURS on this EASTER. DON
You must log in or register to reply here.
Share:
Facebook Twitter Reddit Pinterest Tumblr Email Share Link
Top