HMS Ontario was a British warship that sank in a storm in Lake Ontario on 31 October 1780, during the American Revolutionary War. She was a 22-gun snow, and, at 80 feet (24 m) in length, the largest British warship on the Great Lakes at the time.[2] The shipwreck was discovered in 2008 by Jim Kennard and Dan Scoville. Ontario was found largely intact and very well preserved in the cold water. Scoville and Kennard assert that "the 80-foot sloop of war is the oldest shipwreck and the only fully intact British warship ever found in the Great Lakes." 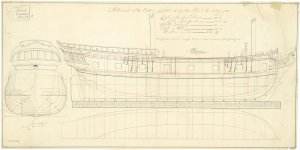 History
Ontario was built in 1780 on Carleton Island, a major base in the St Lawrence River for the British during the Revolutionary War, but now part of New York. She was operated by the Royal Navy for the Provincial Marine in the capacity of an armed transport.

Sinking
Ontario sank in a storm on 31 October 1780 while underway from Fort Niagara to Oswego. Approximately 130 men perished with the ship, comprising an estimated 60 British soldiers of the 34th (Cumberland) Regiment of Foot, (comprising one officer, 34 other ranks, 4 women and 5 children from the regiment) a crew of about 40 Canadians and possibly up to 30 American prisoners of war.

Search and discovery
Sophisticated side-scan sonar technology was used in the search of HMS Ontario in late May 2008. A promising wreck was found between Niagara and Rochester, NY in an area of Lake Ontario where the depth exceeds 492 feet (150 m). The sonar imagery clearly showed a large sailing ship resting upright at an angle, with two masts reaching up at least 70 feet (21 m) above the bottom of the lake. The high-resolution images showed the remains of two crow's nests on each mast, strongly suggesting that the sunken vessel was the brig-sloop Ontario. Due to the depth limitations for diving on this shipwreck, a remotely operated underwater vehicle was deployed and confirmed the identity of the ship in early June 2008.

Kennard and Scoville believe that the cold, fresh water of Lake Ontario, combined with a lack of light and oxygen, have slowed decomposition and account for the ship being found largely intact, despite being on the bottom for 230 years. The shipwreck's discoverers have notified the New York State Office of Historic Preservation, however, the exact location of the wreck has not been publicly disclosed. The wreck is technically still considered the property of the British Admiralty and as such, will be treated as a war grave