HMS Victory was a 100-gun first-rate ship of the line of the Royal Navy, built to the dimensions of the 1733 proposals of the 1719 Establishment at Portsmouth Dockyard, and launched on 23 February 1737.

Construction
A small number of the timbers used in the construction of Victory were taken from the remains of the previous HMS Victory, which had caught fire and been burnt to the waterline in February 1721 whilst having weed burned from her bottom (in a process called "breaming"). Officially a rebuild of the previous vessel, the new Victory was built by master shipwright Joseph Allin and cost £38,239 to assemble, plus £12,652 fitting as a flagship. Launched in 1737 she became the flagship of the Channel Fleet under Sir John Norris following completion in 1740. She was the last British First Rate to be armed entirely with bronze cannon.

Scale: 1:48. Plan showing the body plan with stern board decoration, sheer lines with decoration detail and figurehead, and longitudinal half-breadth for 'Victory' (1737), a 100-gun First Rate, three-decker. Chapman's signature on the plan implies it was copied by him from the Admiralty during his visit to London in 1754. Signed by Fredrik Henrik Af Chapman [Swedish Naval Architect and Shipwright, 1721-1808]. This plan closely resembles the model of 'Victory' held in Cawdor Castle in terms of the scale, the decoration detail, and the position of the ports.
Read more at http://collections.rmg.co.uk/collections/objects/79936.html#uXFL8WbCZXdtoRY2.99

Scale: 1:48. Plan showing the body plan, stern board outline, inboard profile, and longitudinal half-breadth for a 100-gun First Rate, three-decker. The plan was a copy sent by Sir Jacob Acworth to John Naish for rebuilding the 'Victory' of 1695, which had been taken to pieces at Portsmouth Dockyard from 1721. Alterations were later sent to Joseph Allin, Master Shipwright at Portsmouth Dockyard during the building of the replacement 'Victory', launched in 1737.
Read more at http://collections.rmg.co.uk/collections/objects/79935.html#wXwpKlWOYpjzQh6Y.99


The Victory was "a high-sided ship for her draught and this was believed to have made her leewardly and to have led to her loss". The term "leewardly" means she had a tendency to be pushed to leeward (downwind) more than normal when sailing with the wind on or forward of the beam, increasing the risk of being driven ashore. A plan of the ship reproduced in Howard and an extant contemporary model also show her with four rows of lights (stern galleries), three open balconies along her stern, and four quarter galleries, one more of each than was usual for an English three-decker. These expansive features improved her internal capacity and conditions for the crew but were heavy enough to compromise her stability in rough weather. Their addition to the ship reflected a long-running dispute between Jacob Acworth, the Surveyor of the Navy and representative of the Admiralty Board, and master shipwright Allin who had carriage of the actual construction of the ship. Acworth had instructed Allin that Admiralty required the ship's upper works to be "low and snug." Allin, jealous of his prerogatives as a shipwright, refused to adhere to this direction and instead built a particularly large and roomy craft. The completed ship was revealed to be so incompetent a sailer that she required several refits before she passed her sea trials. 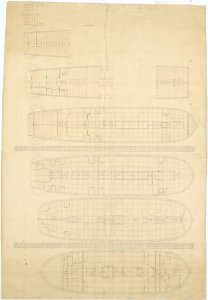 ​
Scale: 1:48. Plan showing the poop deck, quarterdeck and forecastle, upper deck, middle deck, and lower deck for Victory (1737), a 100-gun First Rate, three-decker. The ship was built and later repaired in 1740 at Portsmouth Dockyard after a collision with Lion (1738).
Read more at http://collections.rmg.co.uk/collections/objects/539890.html#oa1YDmaG2kIuPhV0.99

Victory carried 28 guns on each of her gundecks, but with an additional set of unused gunports to the aft of the middle deck. She was the last Royal Navy three-decker to carry bronze cannons; after her loss, the Navy switched instead to cheaper iron-made weapons for all first- and second-rate ships.

Loss
She was wrecked with the loss of her entire crew while returning to England as the flagship of Admiral Sir John Balchen after relieving Sir Charles Hardy, who had been blockaded in the Tagus estuary by the French Brest fleet. As the fleet reached the English Channel on 3 October 1744 it was scattered by a large storm. At around 15:30 on 4 October, the ships accompanying Victory lost sight of her near the Channel Islands. For over 260 years she was believed to have been wrecked during the night on Black Rock just off the Casquets, with the loss of her entire complement.

Frigates were dispatched across the English Channel to search for her where she had last been seen wallowing on the horizon on 4 October. Eventually, Captain Thomas Grenville of HMS Falkland landed at Guernsey in the Channel Islands to provision, and there heard from locals that wreckage and part of a topmast had washed up on the island's shores. Further investigation proved that the wreckage had indeed come from Victory, which was believed to have run into the Casquets, a group of rocks nearby. Other wreckage was washed up on Jersey and Alderney, whose inhabitants had heard distress guns the night before the wreck but were unable to provide aid in the severe storm. No trace of any of the 1,150 sailors aboard Victory was found until the wreck was discovered in 2008. 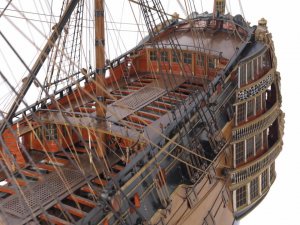 Victory is My Favorite of all the Royal Navy ships she is a Beautiful Vessel. I Bought the Kit a few years ago and started collecting Pictures of her so I do the ship justice on the Build.

Hello Joe,this is not the Victory what is sitting at Portsmoth,this Victory sank. 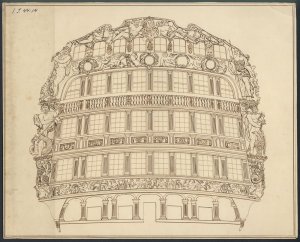 These drawings are signed f.e. with "Sign. Fred. H af Chapman i London 1754, men en avritning av fartyget, han är inte konstruktör. "
So it seems, that Frederick Chapman copied drawings of the Victory in 1754 when he visited London. The ship sank in 1744, so 10 years earlier

Odyssey marine's discovery of Victory was the subject of a documentary on Discovery a while back.

On a side note,I have visited Cawdor Castle and the model is extremely impressive as is the castle.Well worth a visit if on holiday in North East Scotland.Culloden is also just down the road,somewhere else well worth a visit.