While working on the lower hull of Mary Rose I cobbled up a support to protect the upper works while it was upside down.
The base board connects to the inverted hull by dowels inserted in the mast wells.
On righting the model I found that I had created a Tudor aircraft carrier
. 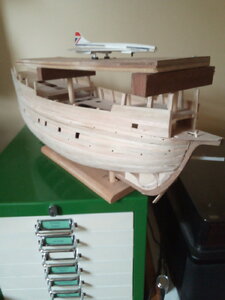 I have almost completed the Mary Rose hull but have decided to defer some of the final outer hull detail on the port side
and some of the deck fittings in favour of rigging the foremast. This is to vary my activity so that I don't end up
lacing shrouds day after day. I hope I don't compromise hull completion! I have done both sides of the fo'c'sle.

I have been experimenting a bit with tying ratlines. Assume working from left to right.
The first clove hitch round the left hand shroud poses no problem.
On the second and subsequent shrouds it is difficult to keep the section of ratline sufficiently taut to
make the section from the previous shroud straight (without displacing it) and simultaneously tightning the clove hitch.
Once a clove hitch is tight it can be slid up and down the shroud but its position along the ratline is immutable.
(I wonder if anyone has ever been brave enough to tie clove hitches with the shroud around straight ratlines?)
The following helps a bit.
When the clove hitch is formed but not quite tight insert a needle between the two half hitches.
Pushing the needle to the left while holding the free end of the ratline pulls the two half hitches against the shroud.
Pulling on the free end while offering some resistance with the needle will tighten the knot while maintaining the desired point of
contact between the current shroud and the section of ratline from the previous shroud.
Essentially the needle keeps the first half hitch tight while the second half fitch pulls the needle to the shroud.
Finally, close the knot by removing the needle while simultaneously pulling the free end of the ratline.
With a fine needle the riny length of released line will not significantly affect the desired position of the completed knot
with luck it will be absorbed via the half hitch next into the free end.
The images below try to illustrate the principle using some more visible thick cord. The red bit is the ratline from the prvious shroud.
The free end is the exit line from the upper half hitch. The dowel represents the needle.
A similar technique could be used with a simpler, quicker (but less elegant) overhand knot.
I also experimented with a cow hitch but that achieves nothing. 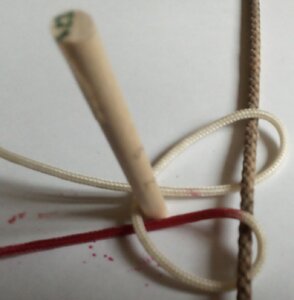 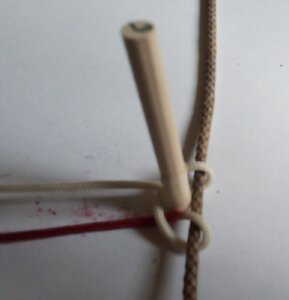 Is there anybody out there who actually enjoys tying ratlines?

Lower Deadeyes
In the two OcCre models I have built the lower deadeyes were fixed with wire strops that passed through holes
in the chain plate and attached to pins partially driven into the hull. (A spot of solder was an option here)
The Mary Rose arrangement is slightly more complex. A cord strop passes round a triangular deadeye and
is tied to a length of fine chain. This passes over a notch in the chain plate to a miniature ring bolt on the hull
My first thought was to start at the bottom and work up. Having fixed the end of a length of chain to an eye bolt
and stuck this into the hull I tried to thread a cord strop through an apprpriate link in the chain.
This proved difficult and there would then be the task of tying it round a deadeye in 'mid air'.
I gave up on that. I tied a strop round a deadeye on the bench, threaded it through the end of a length of chain and
tied another knot.
The instructions seemed to imply that both these knots were together at the bottom, pointy end of the deadeye.
By the time these two knots were sealed with glue the result was bulky and did not sit well in the notch on the chain plate.
Nor did the chain and deadeye align sarisfactorily.
Mark III. I threaded a length of cord through the end link if the chain and tied a simple overhand knot.
I passed the two ends of the cord up either side of the deadeye and tied an overhand knot along its top edge.
When this had been secured with glue, trimmed and pressed into the groove round the deadeye it was hardly visible.
It would be partially hidden by the lanyard anyway. This seems to be a viable option.
Upper Deadeyes
The instructions suggest that these are attached to either end of a length of shroud cord that loops round the upper part of the mast.
I can see that the lanyards could be adjusted to get these two deadeyes to the same height but what about achieving a match with
all the other pairs? All individual shrouds are a different length. A set of eight shrouds can be paired 16 different ways.
Each option would require a different length between the deadeyes on either end. Plus the complication that the later ones fitted wrap
higher up the mast than the earlier ones.
It is a general rule in mathematics and software development (and no doubt other disciplines) that if a solution starts to become
complicated then it is not the best one.
I fitted one headeye to one end of each shroud and left them long enough to tie them together in pairs round the top of the mast.
A simple overhand knot with a dab of glue should suffice. And lots of resulting freedom to get the deadeyes lined up.
[Aside: in practice the lanyards were adjusted to keep the shrouds taut and compensate for changes in temperature and humidity.
I doubt that every shroud responded in the same way to these effects owing to variations in age and variations betweeen rope batches.
I guess correct tension would have been a higher priority than aesthetic alignment. But we modellers are perhaps more artistic]

John, this section is for the build logs from kits (wood). You may accidentally post in the wrong section. Are you building Mary Rose?

Yes. I am building the Caldercraft Mary Rose.
I assumed this stage I debated was part of the build process. Sorry if I got that wrong: I'm fairly new to the site.
Incidentally, I find this site terrific and really useful. Even if idiots like me enter things in the wrong forums (fora?)

Short John Bronze said:
Yes. I am building the Caldercraft Mary Rose.
I assumed this stage I debated was part of the build process. Sorry if I got that wrong: I'm fairly new to the site.
Incidentally, I find this site terrific and really useful. Even if idiots like me enter things in the wrong forums (fora?)
Click to expand...

You have two threads started, I can fuse them , and continue below, here are some video tutorials on how to use the forum