The Minerva-class sailing frigates were a series of four ships built to a 1778 design by Sir Edward Hunt, which served in the Royal Navy during the latter decades of the eighteenth century.

During the early stages of the American Revolutionary War, the Royal Navy - while well supplied with ships from earlier programs, but faced with coastal operations and trade protection tasks along the American littoral - ordered numerous forty-four gun, two-decked ships and thirty-two gun 12-pounder armed frigates. Anticipating the entry of European powers into the war, and with renewed resistance provided by the large, nine hundred ton, thirty-two gun 12-pounder armed frigates of the French Navy, the RN looked to a newer larger design of frigate to meet this challenge. From November 1778 larger frigates with a heavier 18-pounder primary armament were ordered.

They were the first Royal Navy frigates designed to be armed with the eighteen-pounder cannon on their upper deck, the main gun deck of a frigate. Before coming into service, their designed secondary armament was augmented, with 9-pounder guns being substituted for the 6-pounder guns originally planned, and with ten 18-pounder carronades being added (six on the quarter deck and four on the forecastle). The type eventually proved successful, and went on to be virtually the standard frigate type during the latter periods of the age of sail.

=> The new frigate class had more than 50% more fire-power! 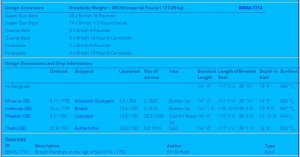 In this post I will show the drawings of the ships of the Minerva class available on the web-page of the NMM..... 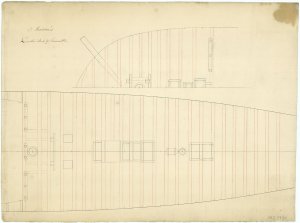 and the model of Minerva class frigates at NMM 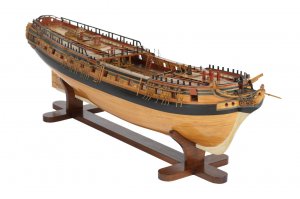 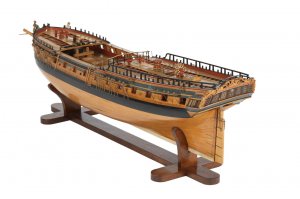 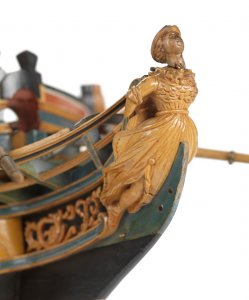 Scale: 1:48. A contemporary full hull model 'Minerva' (1780), a 38-gun frigate, built in 'bread and butter' fashion, planked and finished in the Georgian style. Model is partially decked, equipped and mounted on modern hull crutches. It has been identified by comparison to the original ship plans held in the NMM collection, as well as by the presence of a carved owl on the stern decoration, a figure associated with the 'Minerva’. Built at the Royal Dockyard, Woolwich, it had a gun deck length of 141 feet by 39 feet in the beam and a tonnage of 940 (builders old measurement). The 'Minerva’ was the first of a group of five 38-gun frigates built with identical dimensions. It took part in Admiral William Hotham’s action off Genoa in 1795 and was later renamed 'Pallas’ in 1798. It was eventually sold for breaking up in 1803. 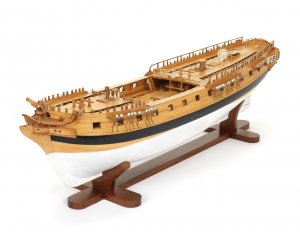 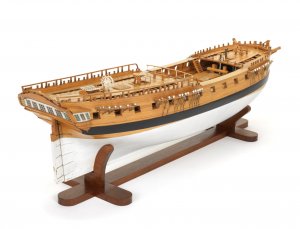 Scale: 1:48. A Georgian full hull model of a 38-gun frigate (1780). The model is decked. The name ‘Amazon’ has been associated with the model, but its dimensions do not suit any ship of that name. From the model the vessel measured 141 feet in length (lower deck) by 39 feet in the beam, displacing 940 tons, builders own measurement. It was armed with twenty eight 18-pounders on the upper deck and ten 9-pounders on the quarterdeck. This model represents a proposed design for a 38-gun frigate, probably of the ‘Minerva’ class (see SLR0317). The use of bone for the deadeyes, stanchions, steering wheel and small items of decoration was a feature of some official models of the late 18th century. G. W. French of Chatham made the model in about 1800 for Sir Evan Nepean (1751–1822), First Secretary to the Admiralty, 1795–1804. Frigates were fifth-or sixth-rate ships and so not expected to lie in the line of battle. With the advantage of superior sailing qualities over the larger ships of the line, they were used with the fleet for such tasks as lookout or, in battle, as repeating ships to fly the admiral’s signals. They also cruised independently in search of privateers.

In Robert Gardiners book The Sailing Frigate: A History in Ship Models
Illustrated from the Collections of the National Maritime Museum 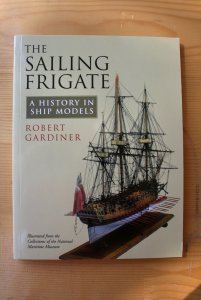 the models of the NMM are shown, but also the beautiful coppered hull of another model of the HMS Minerva which is in exhibition in the US Naval Academy in Annapolis

Excerpt of the Book Review: 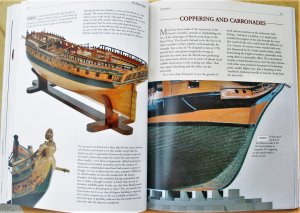 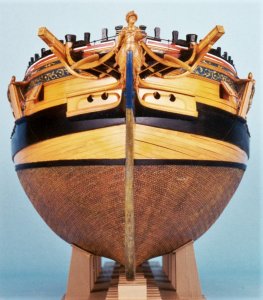 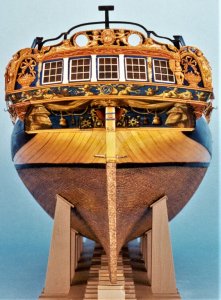 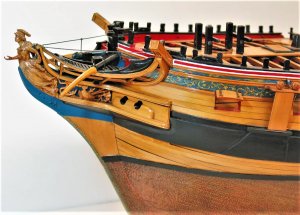 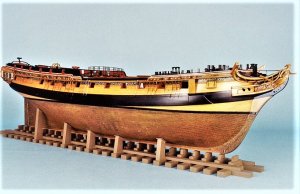 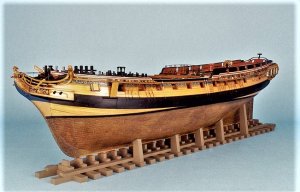 A HISTORY OF THE NAVY IN 100 OBJECTS

Artifacts like those found in the U.S. Naval Academy Museum are tangible links to our past - holding and studying them evokes emotions and makes connections in our memories. The U.S. Navy has a long and storied history - only beginning to understand it would take a lifetime of study. By bringing notable objects and places to life, this podcast series highlights key moments and themes in the Navy's complex history. Citizens and sailors alike can use this series to connect with their past, understand their present, and prepare for their future. The U.S. Naval Academy Museum, the Nimitz Library Special Collections and Archives Department and their partners proudly present "A History of the Navy in 100 Objects," a weekly podcast and video series exploring the navy's storied history using objects. 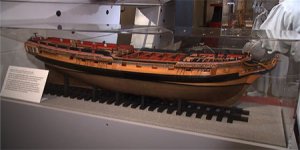 Object 04 - Wooden Model of HMS Minerva
This is a model of HMS Minerva, one of the last new warships produced by the British navy during the 18th century. As the dominant maritime power for centuries, the influences of the British navy were significant in the U.S. Navy's development. From force structure and operational style, to ranks, to ship and cannon technology, the American navy relied heavily on the influences of its precursor, and many of those influences are still seen today. The Minerva was innovative in many ways, but today Naval Academy Museum education specialist Grant Walker takes us through two of the biggest.

excellent. I might purchase that book on sailing frigates. 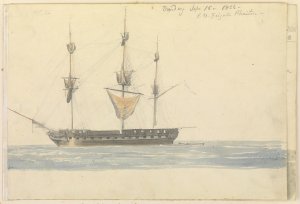 No. 27 of 73 (PAI0889 - PAI0961) (Recto) Drawing insribed in the upper right 'Monday Sepr 16 – 1822 -/ H.M. Frigate Phaeton -', with an indistinct inscription in the upper left. HMS 'Phaeton', 38-guns, was launched at Liverpool on 12 June 1782. (Verso) There is a watercolour of the hull of a frigate on the reverse which extends across a double page. It is extensively annotated in Schetky's handwriting, and by a different hand or hands. It is dated 23 September 1822 as well as 26 September and the frigate is identified as HMS 'Active'. The annotation in the centre of the drawing above the hull (in Schetky's hand) is Sir James Gordon's Frigate. This is, therefore, HMS 'Active', 46-guns, which Schetky's friend and fellow Scot, Sir Sir James Alexander Gordon twice commanded. Gordon became lieutenant-governor of the Royal Hospital at Greenwich in 1840, and governor in 1853. Schetky was a frequent visitor as described by SFL Schetky (pp. 96-7): 'At Greenwich Hospital, when the late Admiral Sir James Gordon was its honoured governor, and my father was his constant visitor, the grey parrot in the hall knew his bos'n's whistle well; and so soon as she heard his voice at the door, uplifted a scream in anticipatory imitation of the notes she expected from it. "All well?" he would ask; and then came the long ringing "call," answered immediately from the room where his old friend sat, by the kind cheery greeting which never failed him in that house, - "Come along, Schetky! There's only one man out of the service that can do that." 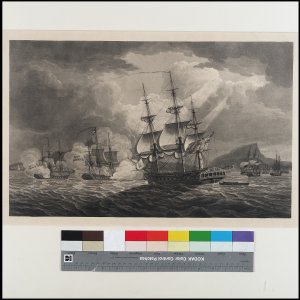 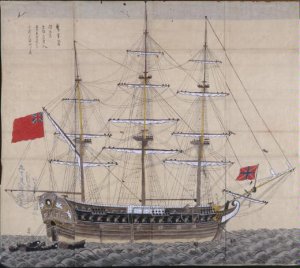 A contemporary Japanese drawing of the HMS Phaeton; in custody of the Nagasaki Museum of History and Culture 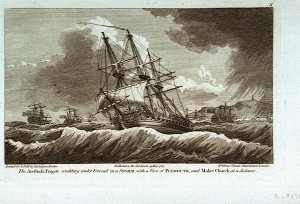 A bow quarter view of 'Arethusa' in high winds and very choppy seas, with Plymouth in the background and the church in Maker also visible. From a book of "Twelve Views of His Majesty's Ships, in Different Situations". Plate No.8. Book 28. Published by Carrington Bowles. 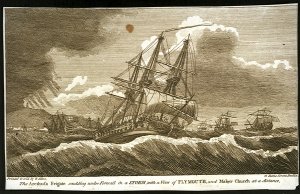 A bow quarter view of 'Arethusa' in high winds and very choppy seas, with Plymouth in the background and the church in Maker also visible. Technique includes engraving. This particular print was published in Dublin by William Allen. The image was also prints by Carrington Bowles as part of the book "Twelve Views of His Majesty's Ships, in Different Situations" (PAD7563). 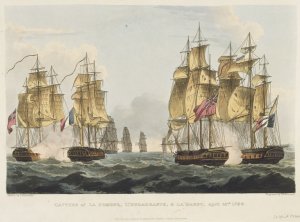 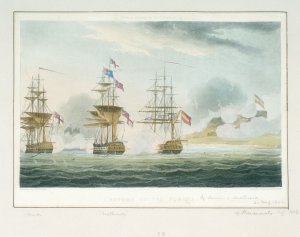 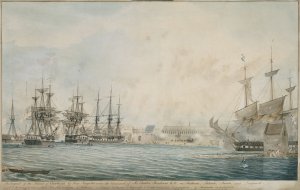 The Conquest of the Island of Curacoa by Four Frigates under the Command of Sir Charles Brisbane &c &c - viz Arethusa Latona Anson and Fisguard [Fisgard] 1. Sr C: B: leading his men to storm Fort Amsterdam...6. Dutch Commodore in possession 7. Surinam in possession (PAI6997) 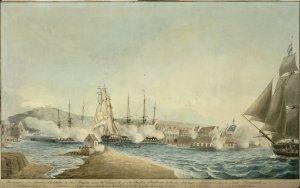 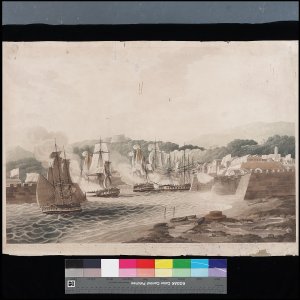 Taking the Island of Curacoa, by Sir Chas Brisbane and his Officers under his Command, Captns Lydard, Wood and Bolton, Commanding H.M.Ss. Arethusa, Latona, Anson and Fisguard [Fisgard] Jan 1 1807 (PAI6435) 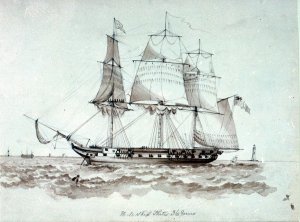 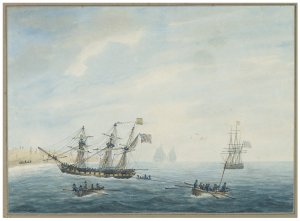 No.1. Thetis on shore near Currituck Inlet, North Carolina Dec 23rd 1794... Cleopatra at anchor near her. Thisbe and Lynx answering private signals (PAG9750)