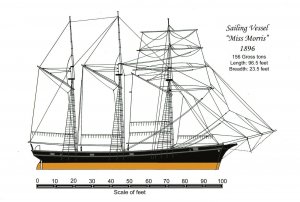 They were used for heavy cargo right up to WWII. The square sails were to help push the ship's head across the wind when changing tack in coastal waters where searoom may have been restricted. There were thousands of them in the 19th and 20th centuries.

shipbuilder said:
They were used for heavy cargo right up to WWII. The square sails were to help push the ship's head across the wind when changing tack in coastal waters where searoom may have been restricted. There were thousands of them in the 19th and 20th centuries.
Click to expand...

Thank you for the reply. Another bit of Maritime knowledge gained.

A top sail schooner would be my choice of vessel today...if I could own a vessel. Less crew, less space......but plenty of adventure. 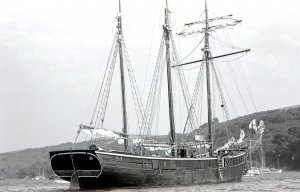 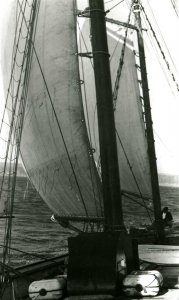 I am not getting along very quickly on this one. Having finished the bare hull, I am now making the display case and base.
Bob 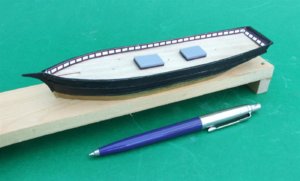 shipbuilder said:
I am not getting along very quickly on this one. Having finished the bare hull, I am now making the display case and base.
Bob
Click to expand...

Jim,
I am OK thanks! The problem at this time of year is the awful weather, I decided to get the display case and base built because I have to do a lot of the work outside, and want it complete before really bad weather comes in. It has been pourng down wirth rain practically every day for the past two weeks. Last week, we had two sunny days, but both freezing cold. Working outside with fingers like bunches of bananas is not much fun, but I have now got the outside work over with. When I return to the model, I will be up to my normal speed again! It is pitch dark at 1630 gmt at the moment. In summer, it is light until past 2130gmt, and I feel more inclined to get moving in brighter warm weather! This is how keen I was a few years ago - working in the snow, but I have got past that sort of thing now!
Bob 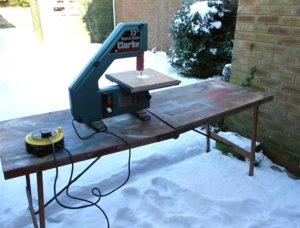 Some times we get a fair bit of snow here in Southwest Ontario, but I have to admit that I have never been tempted to drag my tools outside to cut ship parts out in the snow.
S

I have now spray painted the sea with grey matt primer (automobile body spray) and then given it a quick dusting of white matt spray just to give it a bit of contrast for the photograph. The final sea painting will be either dark blue or greenish blue. I have screwed it temporarily in the base. The hull has also been fitted temporarily. A hole was drilled through the hole under the main hatch, and through the base. The underside of this hole was recessed with a large wood cutting bit. The photograph showing the underneath of the base identifies the screws and holes. The six screws labelled "A" go into the wedge edging round the sea base, to back up the glue. The four labelled "B" are holding the sea in place. The holes labelled "C" are just holes and used to assist in the removal of the sea base to facilitate painting it out of the base. A screwdriver may be pushed into the holes to work the sea out, as it is a close fit in the base. "D" is where the hull securing bolt comes through into the recess. The hull will finally be held in position with a single nut over a washer. I am now free to concentrate on fitting out the hull, and the masting and rigging. Also more work on the display case between times.
Bob 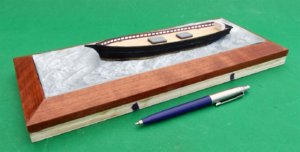 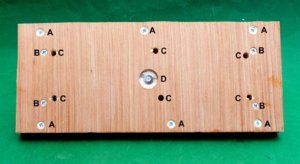 That’s a lot of pre-planning to avoid the OMG moments.
Jan
S 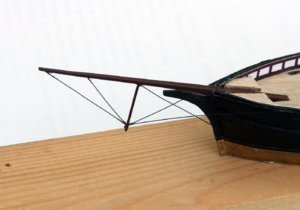 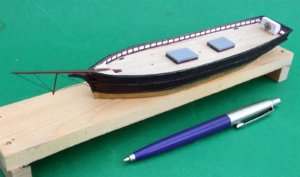 Looks like a great start to another fine model.

I made and fitted the galley and cabin companionway this morning - 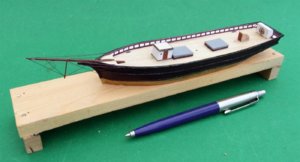 I finally hope to settle back to normal now. On the 23rd December, I was called by the eye department at the hospital to say that if I could get in by 1430 hrs Christmas Eve, they would be able to fit me in for a bit of minor laser treatment on the left eye, as the pressure is a bit high. I was not expecting this to be done until January or February, so I was pleased to say that I would come in. After some final Christmas shopping on Christmas Eve, arrived home at 1200 hrs for lunch, only to be phoned by the hospital again, who said that if I could go immediately, there would be no waiting. I rushed off, and got there at 1250 hrs. A pre-surgery drop was put in, and I had to wait half an hour for it to take effect. The laser took about ten minutes, and was slightly uncomfortable rather than painful. I was then told to go for a walk for half an hour, and come back. When I returned, the pressure had gone down to normal in the lasered eye, and the right one, that had major surgery on the 3rd of September, was checked and also found to be at normal pressure, despite no longer having to put eye-drops in it twice a day. The eye was not covered, and I was back to normal by the time I got home again for a late lunch. This relieved me of a lot of anticipatory stress. I have now made a wooden box for my Christmas present of a set of ship curves to assist with my plan drawing. Then back to the schooner Miss Morris, where I put a few more deck details on this morning. I was almost guilty of ignoring my own advice in view of the eye surgery, and taking the ever-popular excuse "I could not do that now!" when it came to the turning of the tiny winch and windlass parts. Having taken out the lathe for the first time in months, I was pleased to find that I had no problem at all with it. So, I am hoping that from now on, it will be "full steam ahead" again! - Bob 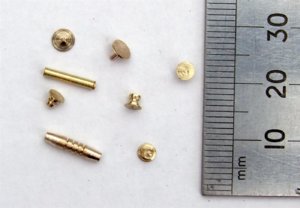 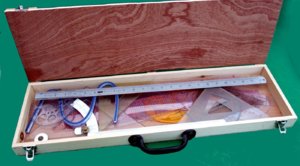 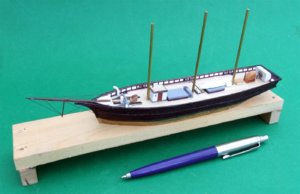 I have now made and painted the three masts, and am currently making the tiny deadeyes, having completed 20 of them this morning.
Bob 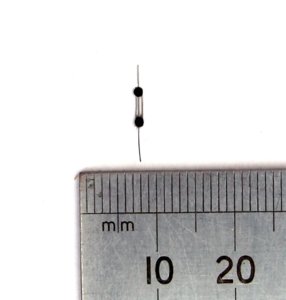