I believe strongly in passing along the skills that I have acquired over a lifetime along to the next generation. I began teaching an apprentice a few years ago, spent 3 years with my first and am into our second year with my second. This young lad is Felix, and is 12 years old. He began by learning wood carving and has since graduated into ship modelling. I have taught him how to read ships draughts, and re-drawing them, and have him working on building half models. This is his second half model, a locally built barque, the Harper, originally built here on the Miramichi River in New Brunswick, Canada, at a shipyard on Beaubear's Island, in 1839. The half model is finished, scale 1/8": 1', and he can be seen applying varnish to the backboard prior to mounting the model on to the backboard. How many other members are passing on their skills, it is a very rewarding experience? 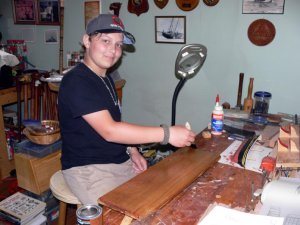 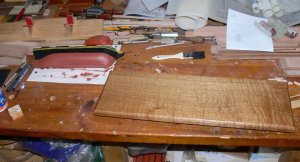 Teacher? I prefer educational rockstar!!! You are a good man, Bob teaching others. I wish to learn reading ships draughts myself, it is never too late to learn. Felix doing a really nice job. Maybe he wants to join our forum?

Today young Felix completed his half model of The Harper, a barque of 1839. He has done exceedingly well for a newcomer to the fine art of scale ship modelling, and has begun work on drawings for his next project. Well done Felix, I am proud of you. 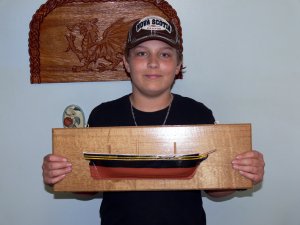 Congratulation for this great model - Felix can me (and on the photo he is looking like) very proud with this model.
Interesting, that he built
first: a half model and
second: a commercial local barque and no frigate with guns !

And you have my full respect for teaching your knowledge

These young guys (and girls) are our future

My apprentice continues his education and to sharpen his skills. He has selected a British frigate as his next project, another half model. and he makes good progress. As this model is a little more complex he will stretch his skills and learn new ones. He learns the history of the vessels that he builds and is becoming quite familiar with the terms. It is so gratifying to find a young person who is interested in learning these skills and knowledge. Has anyone else aboard here taken on an apprentice? I feel it is valuable to pass along the knowledge that has taken decades for me to learn and hope that in time he will surpass his teacher. 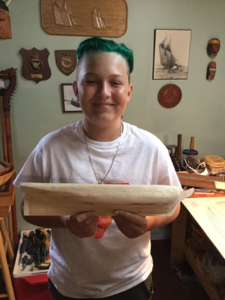 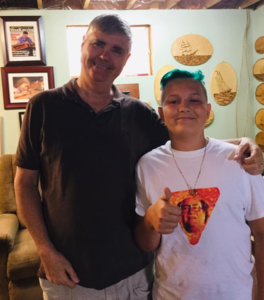