.
This is the official first entry to the Build Log of the Panart's San Felipe at 1:75 Scale. The model was ordered from Cornwall Model Boats early this morning (11/9/2016) and I must say that the person (lady) I spoke with over the phone was very nice, and pleasant to do business with. I just wanted to call to make sure all was well with my order. I was very impressed with CMB. By around noon, I was already getting shipping transactions notifications and tracking numbers ! I also ordered the Paint Set (Ref: APS9105W). It is made up of 11 jars. I thought about adding the sails, but I decided not to at this time. Since my sails will be furled, and doesn't require all the sail material (it would be too bulky), I might try my hand at making my own. Furling will not require the sails to be fully made anyway. The Log will most likely start about last week of December 2016. I look forward to everyone following along.

I am too. Even though mine is 1:50 scale, I will be watching to see what your research and method comes up with.

I will watch with much interest.
Hope to start a Santa Ana build shortly...

I came today. 7:50 PM CST November 14, 2016. It took about one week from the UK at Cornwall Model Boats. It was boxed in a box. Contents looked good and secure of what I could tell. I did not want to dig into it, but just lifted the lid so I could see that the paint set was in it.

Now that looks like a nice build , santa come early there.

Yes, the paint set was wrapped in a separate clear bag stuffed in the corner inside the box. The outer box didn't have a ding anywhere. Nicely taken care of across the seas (or plane ride most likely) !

Yes, of course, I am so tempted to take a longer look, but I don't want to spoil it for myself. I can wait 'till Christmas. I know, everyone is standing around saying let me, let me have it - I 'll get into it now !!!

Beautiful ship Donnie. Didn't take long to get it either. That's a plus! I went to their site, very reasonable prices and excellent selection of models.
I happen to make the mistake of looking it over really good. Mantua's 74 gun Le Supurbe really caught my eye.
Christmas eh? That will be torture, as least it would be for me.

Glad to see you still at it. Looking forward to your build.
Rick

This thread will be great to follow! I have the san felipe by panart myself on my shelf. I was thinking it might be next build after the black pearl.
Not only is it great to have another log to look at while building it. But its even better when it was done by a very good builder. I saw your other log about the santisima trinidad and that ship is just amazing!
Cant wait too see what your about to do with this kit!

Thank you everyone for your interest. In just a few days, I will be taking the lid off and doing a write up with Box pics and all.

I have the kit from china and it is very nice. Like the size of the ship. Comes with hundreds of instruction steps with photos of each step. I have a picture of the kit contents under my La Soleil Royal build.

Well, Finally !!!
The Grand Opening of "The Box" !
Everything is packaged really tight and neat. The first thing that I noticed is how thick the manual is. I only looked at a few pages and what seems to be all color photos - nicely done - a lot of time what put into the effort of design, packaging, and what seems to be a more reasonable effort of the company to help the modeler. Actually so much so, that in the unboxing, the deck sheeting is already scribed out with false deck planking markings at 50 / 50. A lot of lazer cut parts. More than what I am used to. What I mean is the last ship (Trindad) did not have much lazer. Now, I am neither for it or against it. It does help out with having a completed build sooner (which I like), but at the other end, a little less hands on in making things. But, that is still ok with me. I know it will go against the 'grain',,, no pun intended,,,but I might stick to what is given and build as required and not venture off. However, nice cannons and nice Carriages that are all wood and are to be built. I still might build my own carriages since I put so much effort into the design and prototype. At least I will have something that I can say that I did my own. The rigging line is packaged on those square plastic wafers. I hate those. Rigging line comes out with creases in them. Please use round tubes. The only thing out of the entire kit was a very tiny piece of what seems to be part of the transom broken off the lazer cut - that will require at the time a little attention. On with some images of the Box Contents: 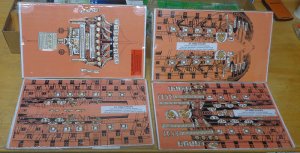 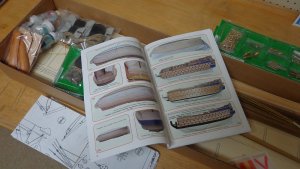 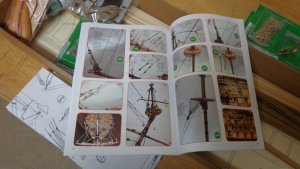 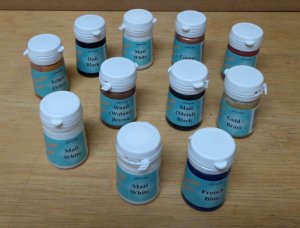 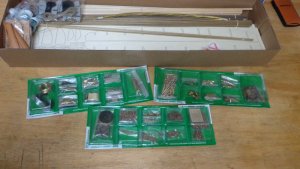 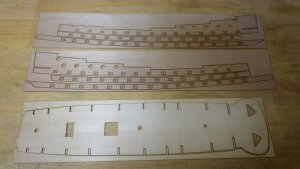 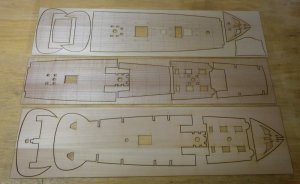 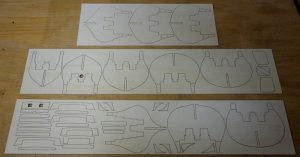 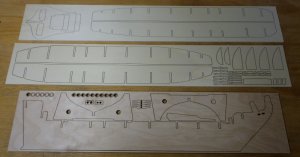 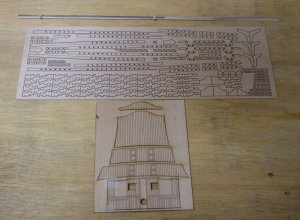 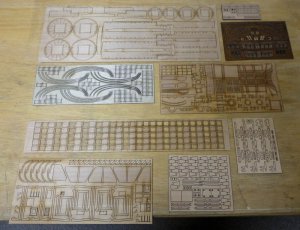 This one going to be a fun build, I am watching it!

Wow.......well be following your adventure.
Rick

Thank you all for following this build. First start obviously is getting the Keel cut out - and - it was a little tough getting out of the laser cuts, but all went well. The Keel does have a little warp in it, but honestly, I guess that is expected and I am not worried about it. The warp is only in one dimension and it is very evenly spread out with a gentle arch that reaches across. No problem I can see. About the time it is put onto a building board, and glue the Bulkheads, I do not see a fore problem with this. The Keel measure exactly 31 inches or 787.4 mm.

Hi Donnie and compliments of the season.
An impressive looking kit, are you going to stay with the laser etched planking or plank over them? Also noticed what looks like plastic lifeboats in pic 04, is this correct?
My wife said she wants a model, I asked her "Calvin Klein or Runway?" The bruise on my arm should be gone in about a week!

You are correct Eric - good eyes I must say. Yep, the tiny hulls are Plastic and rather quite thick with simulated planking all ready built it !! Since I am on the lazy side, I might use them. I know, I know...build your own. We'll see. Yea, the other day, the Admiral was looking through her Department Store sales brochures and was showing me a dress she liked.... I asked her did the woman come with it !!! Yea, that is the same response I got. Ok, that is one of my originals !!!

So much for jokes..

Ok, so I could not deal with using an exacto to cut out those Bulkheads, so I remember that I had a Ryobi Electric Scroll Saw packed away. Dragged it out, dusted it off and put her to use (the saw that is)

The only cuts I had to make was the "relief points" of the wood of where the laser skips from time to time. 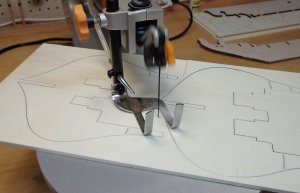 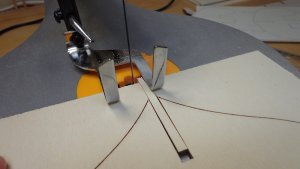 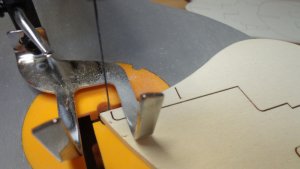 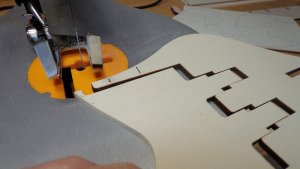 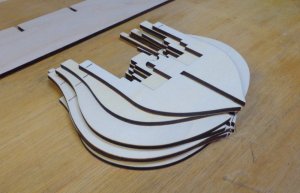 Looks great, Donnie! I'm glad Santa came, and your off to the races now! I'll be watching

A little trivia, those "relief points" in CNC terms are called "tabs". When using a router, in particular, they are designed to keep the piece in place otherwise the piece would move/whip up and be damaged or destroyed by the router bit, usually spinning at 20,000 rpm. Lasers use them for much the same reason.
Eric

Thanks Eric for clearing that up for me. If anyone would know, you would know ! Got the Bulkheads cut out just running the scroll saw by the "tabs" and all is well. My exacto and my hands don't do so well. Final before progressing. I noticed at least one of the Bulkheads slips right (almost falls in) in without the use of any force, hammer, or otherwise. (which is great as far as I am concerned). 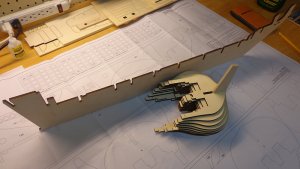