I thought I would take a break from the ratlines and thread some parrels for the Mary Rose.
The metal spacers (80) between the parrel beads are on an etched brass sheet: some with 5 holes, some with three.
I thought I would be efficient and paint these black while on the sheet. Big mistake!
The holes are too small for a needle, needle threader or doubled-over fuse wire.
When bunged up with paint they even oppose the threading of 0.25mm thread - even when it is stiffened with glue.
In desperation I did try a "long splice" between the end of the thread and a length of fuse wire using superglue. Failed.
I now have a choice between paint stripper or lots of poking. (A blow torch might be a bit extreme)
Moral: A mistake is not serious unless it is repeated.

Hi Short,
What is the size of the parcels? I built the Victory 1/98 scale. The kit did not have parcels but I wanted to be as authentic as possible. I found 2mm dark brown beads at Michaels and they worked great. Possibly you could find something that works.

I meant parrels not parcels

The picture below shows the beginning of a long process of threading taken against the background of the instruction sheet.
The spacers are about 14mm long, the holes about 0.7mm and the beads 2.1mm.
Part of the difficulty is that the angle between the surface of the spacers and the bore of the holes is an abrupt 90 degrees.
I think I need a miniature countersink bit to create an easier entry. 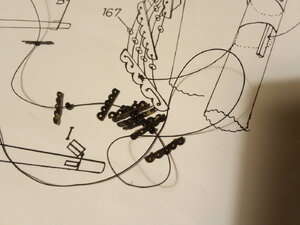 Could always use a mini drill with 0.6mm or 0.7mm bits...something like this https://modelexpo-online.com/Model-Expo-Swivel-Vise-20-Piece-Mini-Drill-Set_p_3443.html