Does anyone have accurate 1/4"/ft Half-Breadth and Sheer Plan drawings of the Pride of Baltimore II, or know where I could purchase them? I've already contacted the folks in Baltimore, and they were kind enough to send me some drawings, but being of such a small size, that when blown up at my local copy store, the lines are blurry. I also have the Model Shipways plans, but since this is a plank on bulkhead kit, it has no Half-Breadth or Sheer Plans.

one way to improve the plans you got from folks in Baltimore,is to trace them in CAD that way you can blow them up to any size and get clean, clear lines.

i do not think there actually was a pride of Baltimore ship the reconstruction is based on drawings of a typical ship of the period. You can see if there is a match in Howard Chapelle book Search for Speed under sail.

Dave, thanks for the reply. Actually, the Pride of Baltimore (LOA 89'9") was built in Baltimore, launched 1977, but lost in a storm 1986. The Pride II (LOA 108') was launched 1988. But, you are correct that historically there was no Baltimore clipper named 'Pride of Baltimore'. Incidentally, there was an 80' brig 'Baltimore', built in Mathews County VA in 1808. The thought of using CAD is intimidating to me. I'm not very computer savvy, and I think my age (81) is against me.

Thanks for the offer, but I have no idea how to send you a private message, since I don't have your email. I would be happy to give you my email for further communications. Another idea I had was contacting Model Shipways. After all, they must have acquired the drawings to develop the plans for their POB kit. The reason why the Pride of Baltimore 2 folks couldn't help me was because they have no facilities for making large copies. I'll probably have to wait till next week, due to the Thanksgiving holiday, to get a reply from Model Shipways. If they can't help, I'll make every effort to take you up on your generous offer. 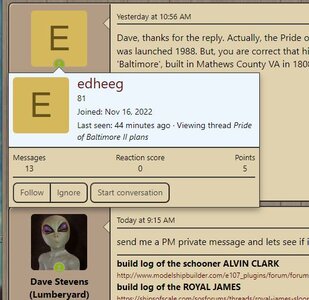 Hello edheeg I have responded in your other thread.