Plans for this model drawn by Vic Smeed, were free in the September, 1961 issue of Model Maker magazine.

The plans are broadly based on a typical Thames Transporter built by the Thames Launch works Ltd.

The models scale is approximately 1/72nd scale, constructed mainly of balsa wood with some brass tube and rod, of fairly simple construction and makes for quite a small model. 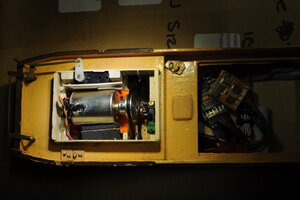 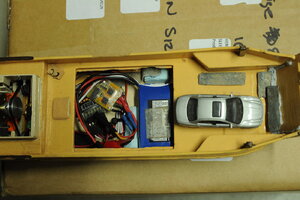 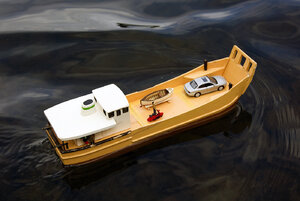 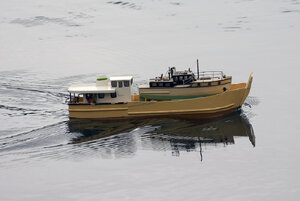 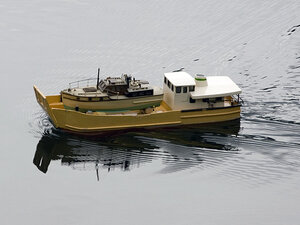 Originally built around 1977 by my father for my younger brother, without radio control and running on 4 AA size batteries, conversion to radio control in 2012 using two channels, one for rudder, the other for motor control forward and reverse made possible by the miniaturisation of modern radio equipment. A more powerful motor was installed, the original rubber band drive was not up to the demands placed on it so an “O” ring is now used, A miniature belt tensioner was made to overcome a problem of the belt slipping off, powered by a 2 cell LiFe Po4 700 milliamp hour battery.

Clearly this boat is not up to the general standard of models built on the SOS site, though it is enjoyable to operate, deck cargo varies, she may be carrying a small model of the Dubarry, built by my father or a small clinker boat, with a car and scooter.

Hey stevedownunder
Nice boat and hey is that a jag .
Ps : take care of her
Cheers snowy