I thought it would be fun to build a simple model for a change (and avoid all that rigging.) This boat is very attractive and I think it will make a handsome little model. I located it at Cornwall Model boats and it was quite inexpensive.

It would seem on the surface that such a kit should be considerably easier to build than a large intricate one, but already I'm not so sure. I know I would be up the creek already if this was my first "starter" kit. The instructions are weak and the illustrations are pretty poor too.

There are a couple of ridiculous "stiffeners" as they call them to be installed at the bow and stern, but I soon discovered they are all but useless, so I cut them out and added filler blocks. I'm a little concerned about the planking. It's clinker, which I've never done before and the material provided is 1.5 mm thick which seems like it will be very heavy to bend over the short length of the model. I'm considering substituting 1mm planks, but I'm not sure if the scale would be noticeably off. I will do some experimentation.

My fears may be premature, but I suspect I'm in for a bit more of a challenge that I anticipated when I bought this one. 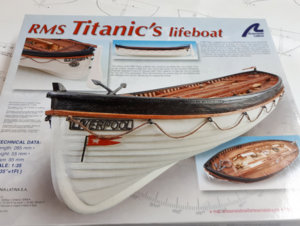 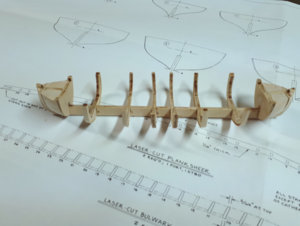 Small boats usually don't require to much effort, and make these type of projects fun to build. I call yem in-between' or few weeks projects. I will watch your build with great interest, clinker planking is challenging, I want to see how this kit suggested to assemble it. I have one under my belt. I posted in the SOS Media category. Good luck!

Well, I'm just about ready to throw this thing across the room. I have made four attempts to plank it, never getting more than three planks on and then dissolving the glue and starting over.

I was hoping it would be a little in-between project bringing me nothing but joy, but it is the most aggravating difficult thing I've tried to do out of all the models I've built. There are many problems to solve: the bow and stern are identical, so if I try to use one plank for the whole length, it has to be cut and fitted perfectly at each end, rather than fitting it only at the bow and just cutting it off at the stern - the planks overlap, so it's very difficult to figure out how much to taper each one at the ends - I don't know what the planking wood is, but it's very hard, very thick and is too heavy and inflexible to work with against the weak and flimsy framework. If this hull was about 24" long with sold bulkheads it might be ok but as it is it's like framing a wall with 2x2's and trying to nail 2x4's on as the siding - and last, but far from least I simply cannot get this clinker planking to blend from the overlap into a flush fit at the bow and stern without looking like hell.

As you have probably inferred by now, I am not having fun with this one, so it's going to have an indefinite time-out and I'm going to focus on my Pride of Baltimore. At least I didn't spend much money on it.

Hello David. I might be too late, and the small boat model become a plane landed across the room, but... if clinker created too much trouble, try to plank carvel instead. In the end, it is your model and you govern how to make it!

Jim, You are in time; it hasn't flown across the room yet. Thank you for that idea. No one would really know the difference, would they, and I have plenty of thinner planking material hanging around. That just might be the answer.
(Many years ago, I actually sent a garden bench across the basement. The top and bottom rails of the back each had a dado, into which I had to line up all the slats and I couldn't get them to co-operate.)
David

Maybe your glue is not strong enough. For my last clinker built model I used Titebond II Premium glue and it worked very well at the very small connections of the strakes.

I read a interesting article today and given the time I was a little surprised by the fact. When the Titanic went down and any crew member alive in a life boat was at that moment no longer on the pay-roll. Seems White Star had a policy in place that as long as you were serving aboard you got paid. But no longer aboard meant no pay for you! And given the tragedy of this vessel, wow. You know the saying, the rich get richer! Oh well, just a little twiddle of info.
Rick

Rick,
I remember having read something to that effect too, but had forgotten. Thanks for reminding me. Almost impossible to believe. Some people are always longing for the "good old days" but they weren't always that good.

I'm still contemplating how to proceed with this difficult little kit. I'm trying to determine if there is a way to proceed that won't result in my being taken away in a straight jacket.
David

I visited the Titanic Museum in Gatlinburg TN. Is well worth the admission, one of the displays is you enter the Pilot House and the temp in there is the same as the temp that night, It also has water you can put your hand into. Let me tell you, it will freeze you to the bone. And to think you as a employee going into that water/life boat w/o pay.....nuts. I have a straight jacket already in my size.
Rick

PS: Clinker planking will drive you coo coo for coca puffs. I have a beautiful French Lugger that is clinker planked. That fact has stopped me from building. Good luck and hope you still give her ago.
Rick
Last edited: Oct 22, 2019

I just have to add David, I too tried a “small” model, the model Shipways longboat. I did throw it across the room and into the circular file. That firmed up my decision to not build anything under 32 inches. Those small ships just frustrate me! I’ve tried several and only finished on, a old AL La Provencale fishing boat. Have fun.
Last edited: Oct 22, 2019

I know, I'm now failing to understand why so many people recommend these small kits to first time builders. I think they'd be much better off with something a bigger. I started with the Armed Virginia Sloop and I think it's an ideal starter kit, with a little bit of everything to do and you don't have to fight with the design of the kit.

The problem for me is that the planking is too heavy for the short length of the boat and it is almost impossible to bend it and secure it without it looking terrible. The clinker aspect is another challenge, largely in part because you have to work from the bottom up and it pretty much rules out working in belts. I've decided to plank the hull as I normally do with some 1/16" x 3/32" basswood that I have and if I'm happy enough with the look, I might leave it at that, or I might attempt a second layer clinker style with very thin material. I think it should be easier with thinner material over a smoothly planked hull.

It hadn't dawned on me until I started working on this one that the boat "Chasseur" for my Pride of Baltimore II is planked clinker style, and I'm more interested in doing that one correctly, so practice on this model, even if it becomes a sacrificial one will likely prove worthwhile in the end.
David

I started with the Occre Ulises tug and I must admit I looked at the picture of the finished boat and looked at the contents and thought there's no way mines's going to look like that! But, I found that learning was easier and mistakes were easier to correct with the bigger scale. My throwing across the room moments were making the lifeboats - planking two 3.5" boats was a nightmare.
You must log in or register to reply here.
Share:
Facebook Twitter Reddit Pinterest Tumblr Email Link
Top