Captain John H. Randall made a fortune as a privateer captain first capturing French vessels under the British flag and then British vessels under the American flag during the Revolutionary War. When he died in 1801, he bequeathed money to found a sailors retirement home on Staten Island ,N.Y. named Sailors Snug Harbor. As his heirs sold off property from his large farm in what is now lower Manhattan, the money was used to fund the and expand the home. By the time it closed in 1976 almost 10,000 retired sailors had lived there.
The buildings, grounds, and amenities that Snug Harbor offered would still appeal as a place to live to retirees today. I can imagine the destitute sailors used to a hard life at sea thinking they had entered an earthly version of heaven when they arrived there. Here is a description from Wikipedia:

Sailors' Snug Harbor includes 26 Greek Revival, Beaux Arts, Italianate and Victorian style buildings. Among those are "Temple Row", five interlocking Greek Revival buildings labeled A through E. The buildings are set in extensive, landscaped grounds, surrounded by the 19th-century cast-iron fence. The grounds also include a chapel and a sailors' cemetery. The cultural center includes the Staten Island Botanical Garden, the Staten Island Children's Museum, the Staten Island Museum, the Newhouse Center for Contemporary Art, and the Noble Maritime Collection, as well as the Art Lab and the Music Hall.
The site is considered Staten Island's "crown jewel"[5] and "an incomparable remnant of New York's 19th-century seafaring past."[6] It is a National Historic Landmark District. Several buildings in the complex are New York City designated landmarks.

Among the buildings in “Temple Row” , shown below, 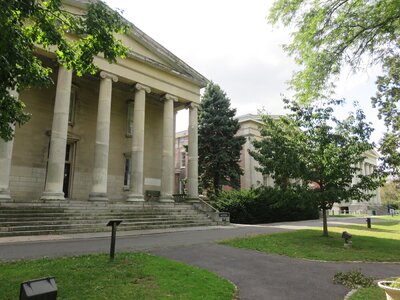 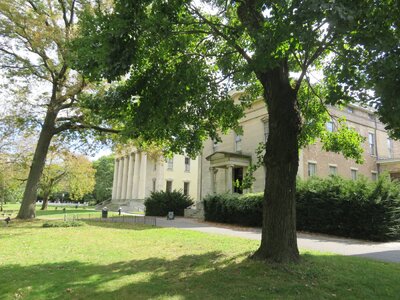 is the Noble Maritime Collection, three floors of exhibits dedicated to the maritime art, old ship models, a number of which were made by the retired sailors, and a history of the Robbins Reef Light House. The rooms in the building itself show the facilities and living quarters available to the sailors. For more information about Noble and his work, see the related review I posted in the Books and References Forum.

If you are in the area, I highly recommend a visit to Sailors Snug Harbor.

Hello Polydoc, I thank you very much for your pictures of Sailors Snug Harbor. My Grand Father lived there for a lot of years. I have been there a few times when I worked on the Gypsum Ships and we docked almost an the Snug Harbor door step, so to speak, and Grand Father Chesley Hines would walk down to meat me on our arrival. Brings back old memories. I did have a camera but failed to take any pictures. Today I kick my self many times for not doing so, as this was a wonderful building with a lot of model ships on display in the Great Hall. Thanks again.
Regards Lawrence
P

Thanks for the comments Lawrence. I grew up in Bayonne, N.J. and lived there until I graduated from college. Unfortunately, I came to ship modeling late in life, and am also kicking myself for not appreciating the maritime history of the Bayonne/Staten Island harbor while I was in the area. I'm now in PA but do get to Staten Island about once a year and intend to make visits to Snug Harbor a regular affair.
3

The Chinese Philosopher's Garden is also worth a visit. One of the buildings has a nice theater that was hosting popular acts until the bug hit. Richmondtown is also a good place to visit. It's a preserved 19th-century village and living history site. Staten Island was pretty rural before the Verrazano Bridge was built. Dutch, then English, then German, and finally Brooklyn ( ha) immigrants built it. I used to go to Boy Scout camp there when Ike was still Pres.

The history of the place is rich. Another site is the "Conference House." It's where American and British representatives had one last meeting to try to put off the Revolutionary War. Fort Wadsworth is the biggest masonry artillery fort still standing in NY harbor. You get fantastic views of the bridge and city from there. Robert Moses knocked the front off of Ft. Hamilton on the Brooklyn side or you'd really see how the two forts closed the upper harbor.

Thanks for your photos and original post about Noble's art. There are so many great places we drive by that are worth a stop.