Why I Chose the Bluenose
My first introduction to the Bluenose was from Frank Mastini's book (Ship Modeling Simplified). To me, the ship had great lines and I really like the look of the rigging. In addition, having built 2 ships of war, and one currently being built, oddly I found myself reading up on the Tea Clippers more than ships of war. Hence, as I was planning ahead for a scratch build, I found myself wanting to build merchant ships and fishing vessels (put a 4 masted Tea Clipper on my down the road list).

With that, for my first scratch build, I was considering The Leon using Underhill's plans and books; however, for those that are not aware, MSB and Navy Board Models contains practicums by PF Eisnor and Gene Bodnar. I thought it would be best to use a practicum by Gene Bodnar as 1) Well, the practicums are by Gene, 2) I read his practicum's and found them easy to follow, and 3) I found his methods within my skills and in a way that I would like to work. Out of all this, I decided upon the Bluenose.

The Bluenose
There is plenty of information to read about the Bluenose. She was included on a stamp(some can fetch up to $700 for you stamp folks out there), and she is on the Canadian dime. The Bluenose was a 2 masted fishing and racing schooner built in Nova Scotia in 1921. She had an undefeated record in the International Fisherman's Trophy Cup. Her nickname was "Queen of the North Atlantic", considering her racing record an appropriate name. She also held the record for the largest cod caught. In 1942, with the decline of salt water fishing, she was sold and used to transport goods in the Caribbean. During this time she hit a reef and sunk with no souls lost.

Eisnor's write up is on MSB site, and has the following about her: 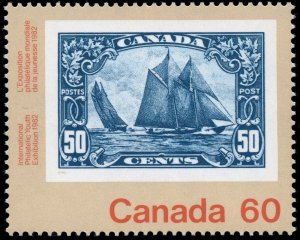 
A Canadian Vignette on the Bluenose:


An article in Popular Mechanic article about the race from 1930.


Plans
As stated above, I will use the plans by Eisnor. Navy Board Models has a plank-on-buklhead practium by Eisnor, and in this document he states (about the plans):

My scale drawings of the schooner “Bluenose” are the result of several years of research, since there are no drawings of the ship “as built”. In addition, minor changes were made to her deck gear and spars over the years of service and photos taken years apart often do not agree in her details. She was built over eighty-five years ago and virtually all her working drawings were either lost or destroyed. Over my years of research, all I was able to find was a yellowed and tattered copy of the original Hull Lines drawing made by her designer William J. Roué. This drawing, coupled with data found at the Provincial Archives of Nova Scotia in Halifax, The Maritime Museum of the Atlantic in Halifax and finally the Fisheries Museum of the Atlantic in Lunenburg, together with numerous photographs and interviews with surviving people who worked and sailed on the original ship, this was the foundation of my drawings. These drawings show the vessel as she was shortly after she was made ready for her first trip to the Grand Banks in 1921.

More information about Eisnor is on the MSB website, and the December 2007 issue of the MSB Journal contains an interview by Winston.

Materials
I asked Gene what wood he used, and the answer was basswood (except for wood under tension). In the practicum, there is a list of which wood to purchase. Going through the practicum, I have only added a 3/16*3/16 stick for the main deck shelf, and a 3/32 sheet for the main rail. For the other wood, I will probably follow Gene's advice and go with apple. I have a supply of some copper wire, so I may make the chain an a few other parts from that. I do not plan sails, but I will make the rope and mast/spars out of what material I have or will buy the material to make.

Gene's practicum has a copy of the original paint scheme from the yard, and it is also on Navy Board Models. I will hand paint, as is my preference, with artist acrylics.

I plan on following Gene's practicum, some of the reference books I own, as well as information from the forms. I have heard some criticisms of the older books as dated or methods not applicable to working today. Advances in glue seems one good sticking point! However, I may still use some of these old methods because as Zoltan states: Build what you like, and like what you build. Sometimes the old way is they way I like to do things, may not be fast or pretty, but something I like to do.

Building Board
While I like the building gantry, I am afraid I may damage the work in progress. To me, the building board will add a layer of protection around a klutz like myself. I still have a few weeks to decide on the building board. I keep going back and forth. At this time, I have not extra wood so it will be a purchase no matter what.

I will be working on my current build (the Admiral is keeping track), and start working on the Bluenose as supplies come in; however, my workbench space can take only so much. I ordered the plans on Friday (1/4/19). The wood I ordered Monday (1/8/19). Next updates will be when the plans come in.

Links (most in my write up above)
P. F. Eisnor article on the Bluenose.
History from The Canadian Encyclopedia
Interview of P. F. Eisnor.
Plans on MSB.
Practicum by Gene Bodnar on MSB.

Hope that you get the plans and material asap, so we can follow your log - I am looking forward to see your built

Plans came in, I ordered last Friday and shipped out that Monday. The plans ship from the son of PF Eisnor.

Call me sappy, but seeing some of the details (such as hand shading and drawing) is great (really can't describe in words), almost like you are there with PF Eisnor in some sense.

Wood arrived. On a budget, so I was only able to order what wood is needed the hull and deck planking; that is, through most of part 6 of Gene's practicum.

I am working on lines drawings, just finished marking out CL of the frames but need to QC. 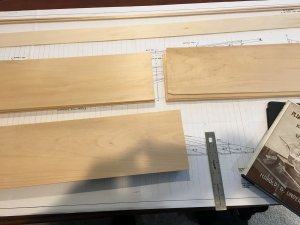 I will follow this as soon as you start the project!!

Mike,
Wonderful! You a giving me a kick in the butt to get hot! I sent you a Personal Conversation..
My log is at MSB (love this site too!). see: http://www.modelshipbuilder.com/e107_plugins/forum/forum_viewtopic.php?24460.0

I love all things Nautical. Because I am from Texas.. HAH

Treebeard said:
Mike,
Wonderful! You a giving me a kick in the butt to get hot! I sent you a Personal Conversation..
My log is at MSB (love this site too!). see: http://www.modelshipbuilder.com/e107_plugins/forum/forum_viewtopic.php?24460.0

I love all things Nautical. Because I am from Texas.. HAH

Hallo Guy, a warm welcome here on board
A