I bought this kit a long time ago, shortly after it was released. I got the original Gold Medal Models PE set and started the build. I wasn't very far along when I had to pack it up for a change of residence. I was having trouble with attaching the PE anyway and it just sat until recently. I got a new set of PE which is much better than the original. Also I had purchased a Tom's Model Works conversion set with the intention of modifying it to a later Fletcher class ship' Then Trumpeter released their model of the USS Sullivans and I dropped the idea of the conversion and decided to finish it as the USS Radford DD 446, the second Fletcher class ship. I painted it with the easiest camouflage scheme there is, overall dark sea blue grey which the Radford sported for a time. I didn't use all the available PE, if a kit part looked good to me I used it. And I still had trouble with the PE railings, what with my big fat fingers but at least it is finished. 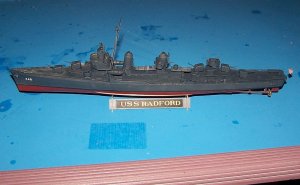 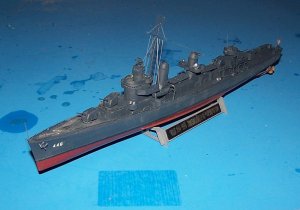 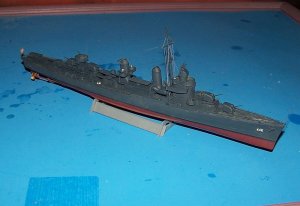