Hello everybody,
This is my first post for the above mentioned vessel for which I must give a small historical information as she was, the least I can say,
a very peculiar schooner:
She was laid down in 1816 on the island of Hydra at the time of the Turkish occupation (1463-1821) and launched in 1818
as a merchant vessel as the Turcs did allow Greeks to build and sail small units (not larger than brigs).
The shipowners were the brothers Emmanuel and Jacob Tombazis from Hydra. Beside being a successful merchant Jacob Tombazis
studied naval engineering and design in Portsmouth until 1816 where he bought (or copied) the lines of the freshly captured
American schooner Lynx, renamed by the British Navy Musquidobit.
When the Greeks convinced England, France and Russia to help them for freeing the country in 1820, one of the main concerns was
to create a fleet able to counter the almighty Turkish one. Naturally, all Greek shipowners joined forces to arm their vessels.
The Tombazis sailed to Italy, France and Malta aiming to arm their Terpsichore with innovative armament and we assume that
Jacob purchased 6 12 pounder guns and one huge 48 pounder gun. We do know about the 12 pounders that were acquired from
France but a mystery remains about the latter as, although duly reported in the archives of the historical Museum of Hydra with
a drawing of a French gun built in 1680, no document can confirm such a purchase.
We do have several documents confirming some of her deeds during the independance war but unfortunately, except for the
general measurements, (27,45 m hull lenght and 256 burden tons) no drawings or sail plan exist, which made for me and my fellow
modeler Georges Bouzounis (unfortunately he does not speak any other language but Greek) the task to redesign the vessel
extremely arduous.
Nevertheless we have decided to build 2 models of the same vessel. One is the shipyard model with a partially open hull and rigging without
sails and the other is a fully rigged and colored model appearing as she sailed during the war.
I already posted the only existing painting of Terpsichore in my presentation when I joined SOS but I post it here below to have
the entire subject under the same thread.
You will also see the first completed drawing of the hull belonging to the "Monographie" to be printed with the presentation of the 2 models
somewhere in 2021.
Below, also I show the first photos of the building of both models.
George and I will be glad to read your comments 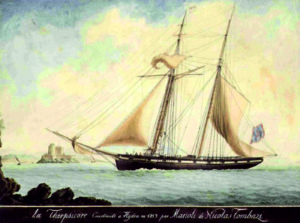 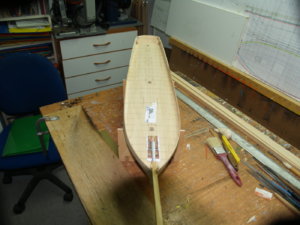 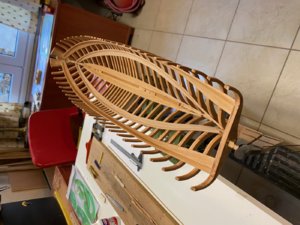 Many thanks Denis and George for starting the build log! I will definitely watch as your build progresses. Are you building both models at scale 1:50?
D

Hello Jim,
Positive we are both building the models at 1:50 scale.
By the way, is there anyone around our forums who can give us precise information on the maneuvering
of the anchors of a vessel of this category and size?
We do have the the french version of the messenger or voyal cable but are there other
means of maneuvering the anchors on these vessels around 1820?

Very interesting, including the history, will like to see the final build

I am a modeler from a very early age and basically interested in sailing ships of late XVIII and XIX century, having built a french cutter (1805) based on the plans of the "Association des amis du Musée de la Marine" (Paris-France), a Barque du Léman, based on the book by Gérard Cornaz and I am...
shipsofscale.com

Hello everybody,
This message is specifically addressed to The administrator and the moderator of the forum.
I recently surfed on the net searching details on the schooner Lynx. I was surprised to find the drawing
I posted for our "Terpsichore" among the various other drawings proposed on the page "Lynx original plans"
Georges and I do not want to have any of our drawings published on the net until completion of our
two models since they are to be presented at a specific historical event.
We don't know who published the PL 1 of our plans but this should not occur without our consent.
Therefore we have decided to send only very few pictures of our ongoing work without plans
in order to avoid inappropriate publishing.
We also would like to ask all members of these forums to respect our wish.
We thank you in advance
Georges and Denis

Denis Gaille said:
Hello everybody,
This message is specifically addressed to The administrator and the moderator of the forum.
I recently surfed on the net searching details on the schooner Lynx. I was surprised to find the drawing
I posted for our "Terpsichore" among the various other drawings proposed on the page "Lynx original plans"
Georges and I do not want to have any of our drawings published on the net until completion of our
two models since they are to be presented at a specific historical event.
We don't know who published the PL 1 of our plans but this should not occur without our consent.
Therefore we have decided to send only very few pictures of our ongoing work without plans
in order to avoid inappropriate publishing.
We also would like to ask all members of these forums to respect our wish.
We thank you in advance
Georges and Denis
Click to expand...

Understood - but what I do not understand is your sentence
We don't know who published the PL 1 of our plans but this should not occur without our consent.
because it was yourself who uploaded this plan in your first post - nobody else.
Is it the plan in your first post of this topic? If yes, you can edit your own post and delete your drawing if you wish.
If you are not able to do so, I will be happy to delete it.......Please advise
D

Hello Uwe,
Thanks for the information. I did not know that by uploading the plan in the forum, it would automatically
go to the net. I managed to delete the plan. Be sure that you will be the first to have the full plans once
the models are complete!!!
Best regards
Denis
D

Hello everybody,
Here we are again with our questions about this peculiar schooner...
We found in Thomas Gordon's "History of the Greek Revolution" the following text on page 487:
"Their junction with the piratical force con
stituted a body of 4000 men , who were put under the
orders of Yani Khalis, assisted by eight influential cap
tains, and destined to kindle an insurrection in the
eastern districts , whence it was sure to spread to the
western provinces. One day 's voyage wafted them to
the roads of St Nicholas, in the canton of Mirabella ,
where they landed (December the 2d ), and , pushing
detachments towards Girapetra and Spinalunga , slaughtered all the Mussulmans they met with .
The commandant of Mirabel retreating into a tower with 160
Turks, they invested and battered it with a 48 lb . carronade ,
brought ashore from Tombazi's schooner , theTerpsichore."
Our question is the following:
After numerous hours of research in our documents, we found no carronade of 48lb!!!!!
We found either 42 or 68.
As we said in our introduction, other documents state a 48lb gun, not a carronade...
Since we know that guns of that caliber were dismissed from naval use due to their weight
(over 5 tons) in early 1700, it is obvious that the use of a carronade (68 lb =3 tons) would have been far more
suitable for such a small vessel.
We also definitely know that the 12lb guns were bought from France and we further know
that Emmanuel Tombazis hired a french artillery officer for advice on arming both his ships
(Terpsichore and Leonidas the latter being a brig).
So far we have no confirmation either way. Was the British historian misinformed?
Is there any trace of 48lb carronades? British, French or American???
Supposing the use of a 68lb carronade, how was it brought ashore?
Enough with our questions... We have sent messages in every direction and we will wait
until we decide what to do.
In the meantime, we have finished the construction of the 12 pounders and I attach a couple of photos.
The pear carriage (dark) is for the painted model and the boxwood carriage is for the shipyard one. 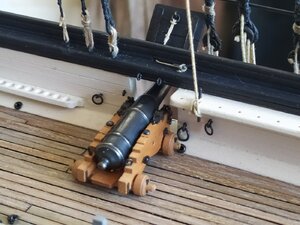 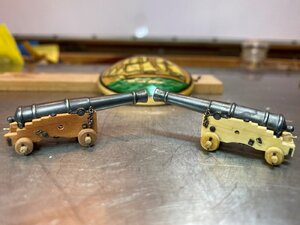 Denis and George
I must point out that you are doing an amazing job both in the construction and preservation of the historical story of this important ship in the history of Greece and its independence. I will continue to follow with great interest

Although I do not have the knowledge to answer your questions, I am sure the other members will try and also be able to help.

Hallo @Denis Gaille ,
we wish you all the BEST and a HAPPY BIRTHDAY

How is the work on your Terpsichore? It would be very interesting to see an update of your amazing model

Hello Uwek,
Thanks for the wishes... Gee... I'm not getting younger!!!!
I attach 2 pictures of the advancement of both Terpsichore... 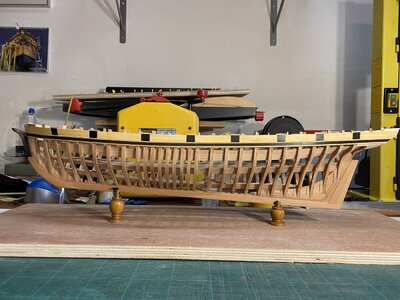 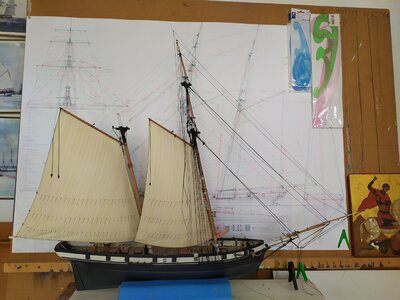 She is looking very good - and very realistic sails.
Please show us more of the model - and maybe you can also explain, how you made the sails !!
D

For the sail making, I will ask George (he is the master of it!!) to give me the whole process...
Beware!!! It is not simple... nor easy and time consuming. One thing I know is that the material is of utmost importance.
Sewing and forming (to give the impression under wind) is another story!!!!
I will come back to you on the subject.
Ich bin nur einmal in Vien gewesen... Eine sehr schöne Stadt.
Bis bald

Denis Gaille said:
For the sail making, I will ask George (he is the master of it!!) to give me the whole process...
...
I will come back to you on the subject.
Click to expand...

This would be very good to know and get explained, how George made them - good made sails are (in my opinion) very important for a good overall appearance of a model - I am looking forward ......

Oh YES - Vienna is a beautiful and interesting city
And now it would be the Best time (somehow) to visit - the city center with the historic sites are empty - not overcrowded
And since some days the museum are re-opened - so if you (and others) have the chance .......
You must log in or register to reply here.
Share:
Facebook Twitter Reddit Pinterest Tumblr Email Share Link
Top