Forever associated with Nelson's last battle at Trafalgar, Victory is one of the most famous ships of all time.
An example of the ultimate sailing warship--the three-decker First Rate--Victory was the most popular and successful 100-gun ship of the period, the flagship of half a dozen famous admirals.
And off course the original is still existing. Due to the fact, that this ship is very often built, also several times shown in building logs etc. this book can be of some interest

But also published by Conway and B&T in several editions 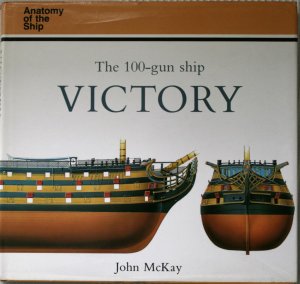 Synopsis
One of the most popular titles in the best-selling Anatomy of the Ship series Comes complete with 1/192 Scale fold-out plan Forever associated with Nelson's last battle, HMS Victory is one of the most famous ships of all time, and is now preserved as a major part pf the Royal Naval Museum in Portsmouth. The ship's survival is particularly appropriate since Victory is not only an example of the ultimate sailing warship - the three decker First Rate - but was also the most popular and successful 100-gun ship of the period. Forty years old by the time of Trafalgar, she had been the flagship of half a dozen famous admirals, and was to continue in active service until 1812.

First published in 1987 in the Anatomy of the Ship series and now updated, this volume provides a detailed description and illustrations of the Victory.
A pictorial section contains numerous clear photographs emphasizing close-up and on-board views of ship equipment and spaces.

* Full description of the ship and her position in the development of the First Rate
* Pictorial section emphasising close-up and on-board photographs
* Guide to the ship's Trafalgar colour scheme on the book jacket
* More than 300 perspective and 3-view drawings, with in-depth descriptive keys, of every detail of the ship as presently restored - general arrangements, hull construction, fittings, decoration, masts and yards, riggings and armament
* One large-scale 1/192 plan on the reverse of extended fold-out jacket

These accurate and totally comprehensive drawings offer ship buffs, historians, and model makers a good view of the ship and her position in the development of the First Rate. 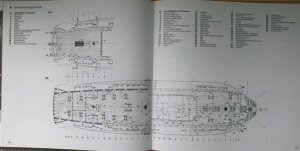 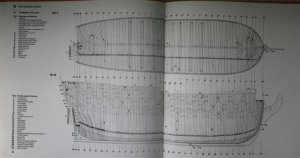 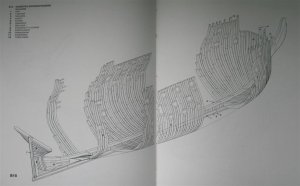 The name of the ship is always connected with Lord Nelsons, whose flagship the Victory in the battle at Trafalgar in the year 1805 was - and as Monument of this victory the HMS Victory was received.

The book consists:
1. the text-part with information to construction, building, employment history, equipment and armament in addition with several listings and schedules
2. the Photo-gallery of the Victory from the time after their large repair and reconstruction in the 1920´s years
3. the drawings and sketches with hull, masts and rigging, armament and equipment.

The Text and Photo-part are good and very informative;
in the drawings part I miss the usual frame and waterline draughts of the hull (sheer elevation, body line, half breath etc), instead of them McKay is showing us on many pages innumerable cross sections, which are certainly interesting - however are irreplaceable for a general impression of the hull with the use of “traditional” drawings. (My copy is from 1987, first edition and has no “Fold-out-plan Dust Jacket! Maybe the line drawings are now with the new editions adjusted here? But as I heard shown is a rigging drawing)
The perspective drawings of the keel, frames and hull as well as the draughts of the masts and rigging are good and detailed enough. Unfortunately some of the sketches are very small or is such a scale that the details are not clearly shown so that the information is indistinct, and there is no tidy sail plan (supposed because the Victory in its present condition is also without sails?).
However the sails are vaguely suggested in some drawings, and there is a schedule with the dimensions of the sails of a 1st rank ship of the line. The book is showing us the HMS Victory only in the 1805 version (Trafalgar), unfortunately one more book which forgets completely that the ship was at this time already 40 years old. We find only one small painting, by Monamy Swaine, of Victory as she appeared in 1793 (with open stern and lateen sail upon her mizzen mast) as flagship of Admiral Lord Hood.

Despite everything the book is surely one of the most comprehensive one showing the details of the Victory - it is a good addition to the book of McGowan, to which McKay made also the extensive drawings. 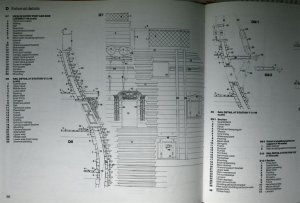 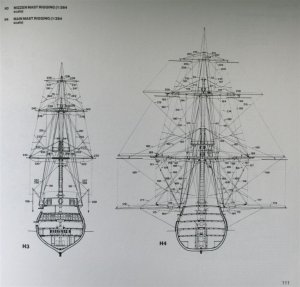