German submarine U-534 is a Type IXC/40 U-boat of Germany's Kriegsmarine built for service during World War II. She was built in 1942 in Hamburg-Finkenwerder by Deutsche Werft AG as yard number 352. She was launched on 23 September 1942 and commissioned on 23 December with Oberleutnant zur See Herbert Nollau in command. 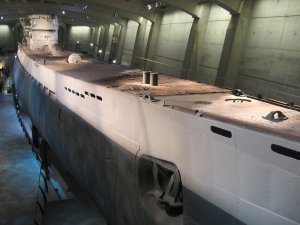 The U-boat is one of only four German World War II submarines in preserved condition remaining in the world, another being the IXC boat U-505 in Chicago's Museum of Science and Industry. U-534 was used mainly for training duties, and during her service she sank no other ships. A Royal Air Force bomber sank her on 5 May 1945 in the Kattegat 20 kilometres northeast of the Danish island of Anholt. U-534 was salvaged in 1993 and since February 2009 has been on display in Birkenhead, England as part of the U-boat Story.

But coming now to the "mystery"

In the early hours of 5 May 1945, a partial surrender ordered by Admiral Dönitz of German forces in Denmark, Germany and other areas went into effect. The U-534 was informed by the harbour master at Oresund Elsinore that the ceasefire was in effect south of the 56th parallel.

On 5 May 1945, the U-534 was 2 nautical miles (3.7 km) north of the 56th parallel, and Nollau decided to form a convoy with two Type XXI U-boats, the U-3523 and U-3503, and continue sailing north on the surface of the Kattegat sea in an area too shallow for crash diving, when two British RAF Liberator aircraft attacked (G/86 George from Tain and E/547 Edward from Leuchars). The crew managed to shoot one bomber down, and nine depth charges from the bombing runs missed, but then the boat received a direct hit by a depth charge from G/86. The U-534 began to take on water as a result of the damage to her aft section by the engine rooms, and sank north-east of Anholt. The shot-down Liberator crashed 3 nautical miles (5.6 km) away, and all on board the plane were lost. 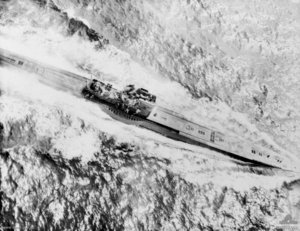 The U-534 had aboard a crew of 52 men; all escaped the sub, and 49 survived to be rescued. Five were trapped in the torpedo room as she began to sink, but they managed to escape through the torpedo loading hatch once the boat had settled on the sea bed. They planned their escape the way that they had been trained, exiting through the forward torpedo hatch once the U-534 had settled on the seabed and swimming to the surface from a depth of 67 metres (220 ft). One of them, 17-year-old radio operator, Josef Neudorfer, failed to exhale as he was surfacing and died from damage to his lungs. The other deaths were by exposure.

The U-534 lay on the sea bed for nearly 41 years, until she was discovered in 1986 by a Danish wreck hunter, Aage Jensen. Theories ranging from a rogue captain to secret experimental weapons were posited as the remains of the ship rusted away at the bottom of the ocean, but no answers were forthcoming. Soon rumors began circulating that the boat was trying to smuggle Nazi treasure out of Germany before it was retaken by Allied forces, and nothing spurs on a project like the promise of gold.

Shortly afterwards, the wreck hunters' group contacted Danish media millionaire Karsten Ree, who sponsored raising of the submarine, as rumours of Nazi gold in the wreck caused intense media coverage. Due to the fact, that the sunken boat was no war grave, it was allowed to lift the wreck. The U-534 was raised to the surface on 23 August 1993 by the Dutch salvage company Smit Tak .

In 1993 the U-534 was raised to the surface to the disappointed sighs of treasure hunters who found no such booty, and the excited squeals of historians who discovered countless documents and artifacts from the war, not the least of which being the boat itself. So no idealism was the basis for salvage, it was only treasure hunting.

Transported to Birkenhead, England, in 1996, the vessel formed part of the Warship Preservation Trust's collection at Birkenhead Docks until the museum closed on 5 February 2006. On 27 June 2007, the Merseytravel transit authority announced that it had acquired the submarine to display at the Woodside Ferry Terminal. 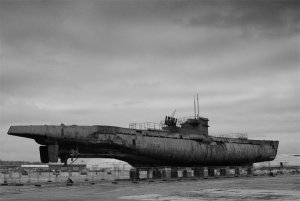 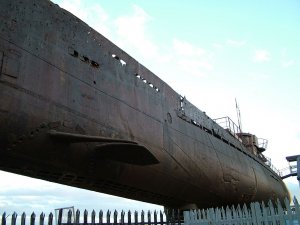 For technical reasons and to facilitate economical transportation to its new site, the vessel was cut into five sections, two of which were subsequently re-joined. It is now displayed in sectioned form to allow visitors better visibility without entering the U-boat. Merseytravel said that preserving the hull intact would have created prohibitive transport costs. Engineers began a month-long operation to divide the U-534, using a diamond wire cutter, on 6 February 2008. On 10 March 2008, the sections, each weighing as much as 240 tonnes, were transported over several days by floating crane.

Here the web-page of the exhibition: https://www.u-boatstory.co.uk/exhibition/Pages/default.aspx
interesting article with photos: http://www.lancashireatwar.co.uk/birkenhead-u-boat/4590329173
Info on web-page of German U-Boat Museum related to the U-534 (in german): http://dubm.de/u_534/ 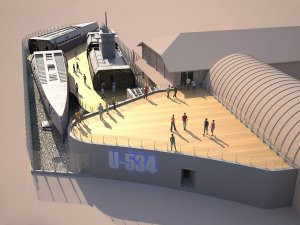 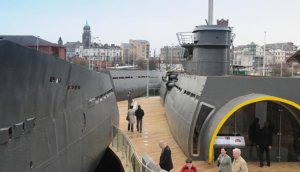 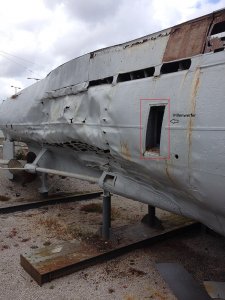 Mills Media was commissioned by Merseytravel to produce an in-depth documentary about U-534's epic journey - from its sinking in 1945 to its newly found status as the latest Mersey Ferries attraction. With record visitors in its opening months, the U-Boat Story at Woodside has truly captured the imagination of the public. Unprecedented access allowed the Mills Media crew to capture the refurbishment, cutting, transport and delivery of U-534 over an eighteen month period. The programme also includes archive war images, salvage footage from the depths of the ocean and candid interviews with key players in the project's success.