Book Review:
The Naval Cutter ALERT 1777 (Anatomy of the Ship)
by Peter Goodwin 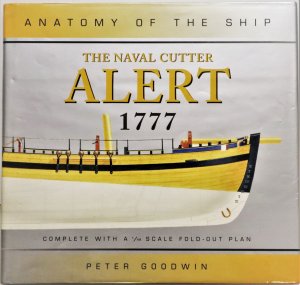 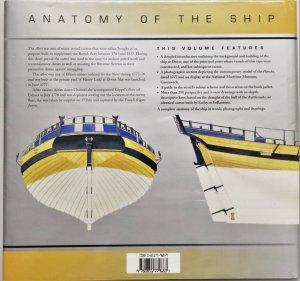 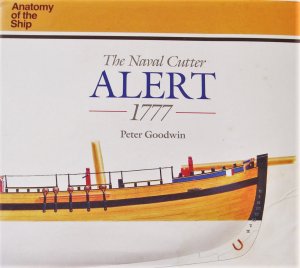 My copy is the 2004 version from Conway, which includes an additional fold out plan in 1:48 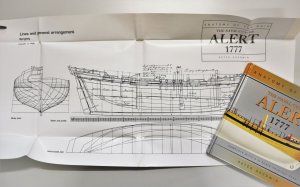 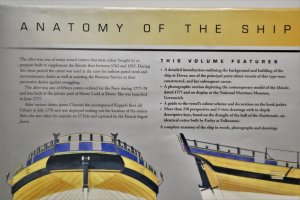 This volume features a full description of this armed cutter, its concept, origins, design details and wartime service
With over 100 perspective and 3-view drawings, accompanied by in-depth descriptive keys and photos
This revised edition features a large-scale plan of the vessel on the reverse of an extended fold-out jacket

The Alert was one of many armed cutters that were used to supplement the British fleet between 1763 and 1835, and these small swift vessels were generally employed in minor roles such as conveying dispatches, routine patrol work and reconnaissance. Alert was constructed in Dover in 1777 an d was captured by the French in July 1778 while acting as escort for Keppel's fleet off Ushant.
The 'Anatomy of the Ship' series aims to provide the finest documentation of individual ships and ship types ever published. What makes the series unique is a complete set of superbly executed line drawings, both the conventional type of plan as well as explanatory views, with fully descriptive keys. These are supported by technical details, photos and a record of the ship's service history.

Peter Goodwin has been interested in wooden shipbuilding since his days as an engineering apprentice. He has written two other 'Anatomy of the Ship' volumes, The 20-Gun Ship Blandford and The Bomb Vessel Granado. His other Conway books include Nelson's Ships, and The Construction and Fitting of the Sailing Man of War 1650-1850. He has been the Keeper and Curator of HMS Victory for over ten years.

Peter Goodwin is widely acknowledged as one of the leading writers on the sailing warship. His published titles include the classic The Construction and Fitting of the Sailing Man of War (Conway, 1990), The Bomb Vessel GRANADO (Anatomy of the Ship), Nelson's Ships (Conway 2002) and The Ships of Trafalgar (2005). Peter was Keeper and Curator of HMS Victory for some 20 years.'


One model shown in the Anatomy book by Goodwin is in the collection of the NMM,
https://collections.rmg.co.uk/colle...el-318037;browseBy=vessel;vesselFacetLetter=H 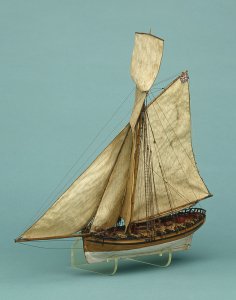 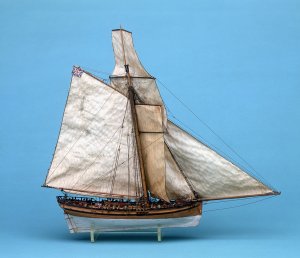 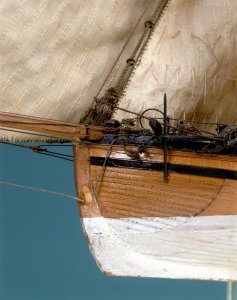 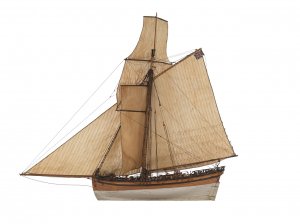 Scale: 1:96. A contemporary full hull model of the 'Hawke' (active 1777), a revenue cutter, built plank on frame (?) using clinker construction in the Georgian style. The model is decked, fully equipped and rigged with a full suit of original sails set. The name ‘Hawke’ has been painted on the stern as well as on the original display case. It has not been possible, however, to identify a vessel of this name that fits the dimensions of 72 feet along the deck by 25 feet in the beam and tonnage of 180 (builders old measurement). However, the dimensions are approximately correct for a typical naval cutter of the mid-18th century, although it is fitted with more guns than usual. The rigging shows the arrangement and layout of the three square sails and their yards, which is the maximum that could be carried with a cutter rig

A very interesting subject about a type of ship, which is often unknown.
The book with the descriptions and especially the detailed draughts is giving a modeler best information to build such a model in scratch or even the kit model which is in moment under preparation by Trident models

As often with this series, this book is highly recommended for the interested modeler


(More Look Inside photos you kind find in the following post)

some more Look Inside photos to show the content - for more info, please see the previous post in this topic

UWE, thank you for a nice book review, and as before I said I ordered the book a while ago and I am already waiting for the postman.
A

Uwek said:
A very interesting subject about a type of ship, which is often unknown.
Click to expand...

I agree, especially if you are interested to build the new Trident of the Vanguard Models kit. Also for a scratch builder there is a lot of useful information


Uwek said:
The book with the descriptions and especially the detailed draughts is giving a modeler best information to build such a model in scratch or even the kit model which is in moment under preparation by Trident models
Click to expand...

The drawings are nice, but not the best in the serie. There are lines drawings from two different cutters in different sizes (Sprightly and Alert/ Rattlesnake).
The line drawing for Alert doesn't match the original drawings (as I have all written in another thread). The frame design generates for me a lot of questions. There are two different sources (EPNA and Shipbuilders Repository) which are giving dimensions for cutter, but they don't match the design of the book. Why Goodwin chooses this design? It's also possible that y cutter was build on a private shipyard, only with double frames (fireships of the Tisphone class are build this way) or with single frames.
I miss in the book a list of the sources Goodwin needs, to reconstruct the cutter. So you don't have the possibility to follow his steps and check the results.

You can build a nice cutter model. But is this a model of HM Cutter Alert /Rattlesnake? I am not sure

A great kit of the HMS Alert 1777 as POF (Plank on Frame) in scale of 1:48 is currently under preparation by the chinese manufacturer Trident Models.

So if you later built this model, the book can help very much.

Take a look at this topic:

Would anybody have a copy of this book for sale? cheers

kidsgalore said:
Would anybody have a copy of this book for sale? cheers
Click to expand...

At the moment this book is on a high demand. ,if you look at the prices on Amazon ,Abe books,try to do a search on Bookfinder.com,it will gives you all the prices and options