Gentlemen,
I am a ship modeler from San Fruuoso, near Portofino (Italy).
I’m looking for plans and images about the screw steam ship “Croesus”, an English ship that
burned and sunk in the San Fruuoso bay on April 24th, 1855, while was embarking Italian
infantry to Crimea.
As I wrote before I’m looking for images and possibly plans about this ship or, in the worst
case, sister ships. The reason for this request is that I was asked to build a model of “Croesus”
and I need of them, if available.
Can you help me?

To simplify your research I add here a link to more detailed informaon about the “Croesus”:

if I search at the NMM site, you will find the information, that they have (minimum) one drawing and some prints of the Croesus. 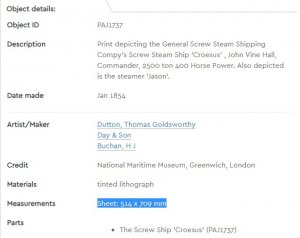 With this knowledge and the onject ID you can write a post to the NMM and they will prepare a copy of this drawing sheet after paying the requested fees.
Write them a mail or call them - very often they are very helpful - maybe they have more drawings of Croesus or Jason than mentioned in the web-page - Give it a try.

Many thanks, I will definitely try.
A greeting
Cheta 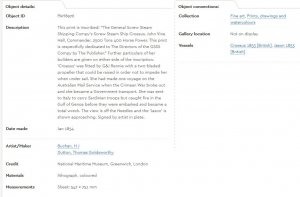 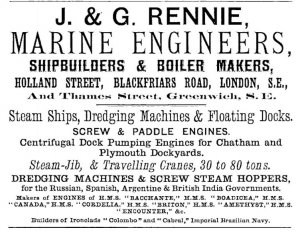 Thames Iron Works Shipbuilding & Engineering took over the builders C J Mare in 1857, and were wound up in 1912. Annual reports records went to the Greater London Record Office County Hall SE1 7BP. Other records (Thames Iron Works Gazette 1897 - 1906, Historical catalogue 1911) went to Tower Hamlets Central Library, Bancroft Road, London E1 4DQ. No ship plans are mentioned in the records at all. Unlikely that the engine builder would have plans of the vessel either, and their records show that only an incomplete selection of general arrangement plans for ship numbers 246 - 487, (1933 to 1966) were saved. So it is unlikely you will find any plans for Croesus.

I found another helpful information

I am not 100% sure, if the ships, mentioned with 1850 tons are all similar or sisterships.
If you search in NMM for these names you can find several drawings of the "Queen of the South" listed

Scale 1:48. A plan showing the sheer lines with inboard detail, body plan with sternboard and longitudinal half-breadth of the Queen of the South (1852), a screw steamship. A pencil annotation on the plan reads: 'General Screw Steam Navigation Co. See Thames Iron Works Gazette Vol 1 No 2 page 43.' 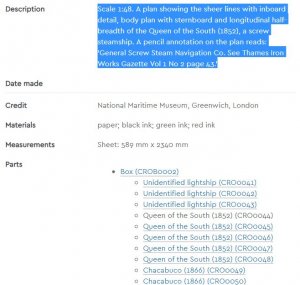 when a ship building company had a workable design I would think in general like hull lines they would stay with a proven hull rather than venture into new unproven design changes.

go through the list Uwek posted and see if any are close to the same size and check what plans are available. looks like CJ Mare was cranking out the steam ships each one could not have been designed from the keel up. So what I would do is compare all CJ Mare ships and see how similar they are, you could reconstruct the Croessus based on the design work of Mare

Merchant ships were not like warships and British companies did not tend to have lots of them all the same (except for the war years). USA seemed to favour standard ships, but I have sailed with companies that had fifty or more ships, most of them different, although used in the same trades. Invariably, there were some that were duplicated, but most were different. Even the ones that were supposed to be built from the same plans were often different in many small ways. But Croessus was built so long ago that no-one would know if it was right or wrong, unless you found the original plans, which I think is highly unlikely after all this time!
S

So that shows they hadn't altered the tonnage by simply lengthening the ship. They were different widths and depths as well! You would need to check all the dimensions and tonnages, and then if you found another the same, it may well be a duplicate!

shipbuilder said:
Croesus 2,500 tons - Queen of the South 1,850 tons. That is quite a difference, so not sister ships!
Click to expand...

This is correct, but according NMM the drawing of the Croesus is the same like for the Jason.......so I did not check the tonnage of the Croesus in the listing.
And when I read this info: 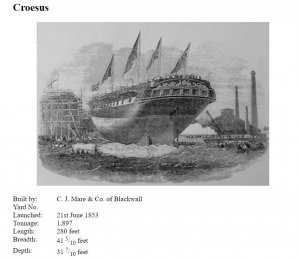 I think Cheta now has enough leads to work on now, but I really doubt if any plans will be found. Merchant ships were always considered of less importance than naval ships, and it is more than likely that any plans would have been destroyed many decades ago -

shipbuilder said:
I think Cheta now has enough leads to work on now, but I really doubt if any plans will be found. Merchant ships were always considered of less importance than naval ships, and it is more than likely that any plans would have been destroyed many decades ago -
Click to expand...

Afraid it has always been the case. You hardly ever see models of merchant ships built. Croesus was a merchant ship. The "gunports" were just painted on as decoration. But we were always subject to be "grabbed" by the navy when wars came up. I would love to see a model of the Croesus built, but think the finding of plans is remote, to say the least!

Perhaps this smaller ship could have been similar, it was built in England around 1855

sorry for the quality of the image, I don't know how to do better