I will make a triple in one review not only because I dislike opening unnecessary threads but also I will have the chance to compare the models among them. 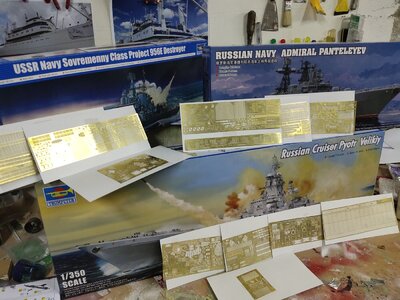 Normaly i do not collect or build 1/350 models cause of their bulk. However as i was browsing i found a company called microdesign specialized in PE parts for Russian - Soviet (and not only) model planes, ships ,armor etc. They have over 5500 product codes, pretty impressive. Their prices were quite tempting, especially off Ebay were -30% . So i placed the order right from a Russian store, they even respond on Sunday and after two weeks i got them in hand.
Meanwhile i had ordered the ship kits from nearby Bulgaria, got them in just 2 days.

The kit is quite similar to the 1/700 series. It has a full hull/waterline option as well as some basic PE parts for the radar mast. The total length is almost 45 cms. There are 8 sprues for a total of 390+ pieces according to the box.

Finally there is one decal sheet with lots of number decals, so builder can choose which ship of the class will resemble. 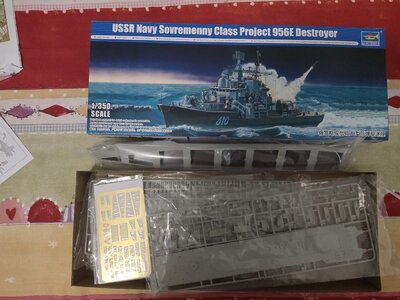 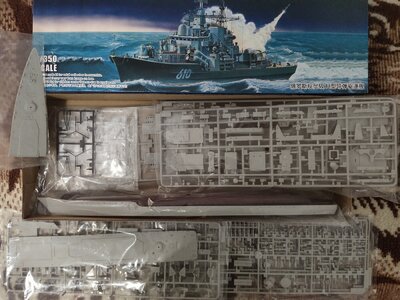 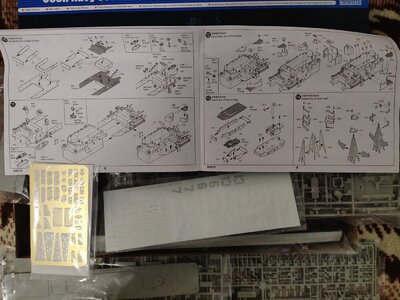 As for the PE parts i wasn't sure what to expect as i had no other experience with this company.

There is on sheet with railing bars, and two others with various parts. Although packed with caution i noticed a few bends. Also the last sheet had some marks like light rust (on PE?). I sanded it and gone right away. Bends also were not an issue no part seemed damaged.

I did some cut testing. With used blade on hard and soft surface. Finely attached parts would cut easily while thicker joints could be cut only on hard surface without the risk of damaging the part. In short, while they are not as crispy and easy to handle as A quality PEs, there are better than various chinese makers i have used in the past. We will see in the future how they appear on the model. 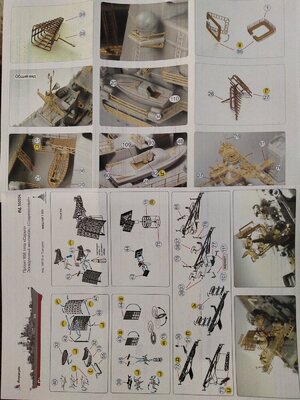 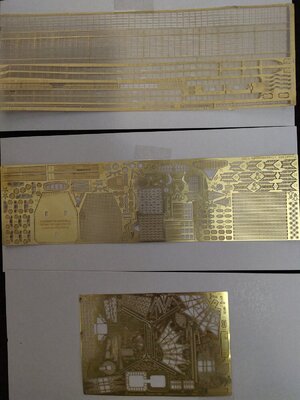 This one is slightly bigger about 46cm. There are also 390+ pieces here but i see 9 sprues. Perhaps Trumpeter has limited the counter to 390.


There is waterline/full hull option except that bow sonar comes as a separate part now. A pleasant addition is the illustrated color sheet for decals and paint guide, like in most 1/700 kits. Pretty useful. I will use it as a reference for the Sovremenny kit as well. Another difference is a sprue with clear parts, not only for the helicopters but for some superstructure parts. Interesting.


These ships have two distinctive complex radar towers. These are well made with good detail. Adding the PE parts i think will make the kit look quite handsome. Finally, a small set with PE parts mainly for the radar assembly is provided as well.


Overall it is a nice kit comparable to the more quality series of 1/700 scale like the Battleship Roma, West Virginia and more.

The PE set arrived in perfect condition. It looks quite decent and very detailed. There is an additional set comparing to Sovremenny kit containing many high detailed grills. This is definitely a welcoming addition. If built properly will result in one of the most impressive modern ship kit. 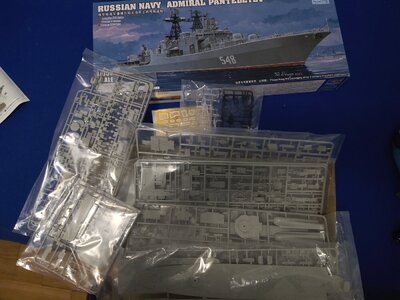 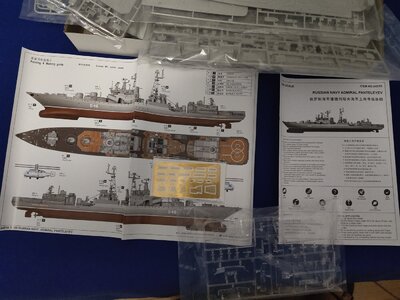 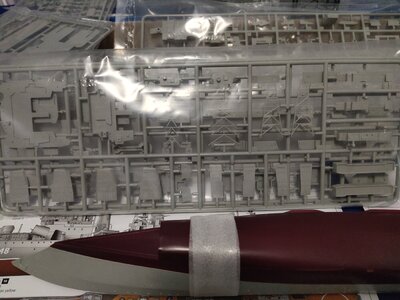 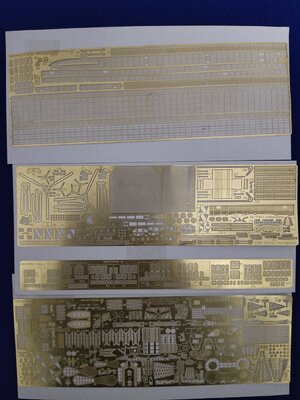 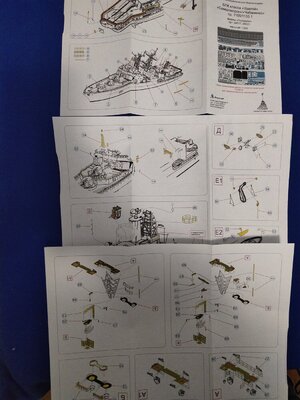 Opening the box of the Pyotr Velikiy , its easy for someone to realize why these ships are considered battlecruisers. Their size is close to ww2 battleships. My workbench is occupied so i took the photos on top of my deep freezer, the only available flat space in the room
The kits itself has 550 pieces and its 72 cm long. It has 16 sprues, 3 of them in clear color and one additional with PE radar parts. The radar parts comes both in grey and clear plastic as well in PE form.
The instruction manual comes in 24 pages plus the illustrated sheet for painting reference. The hull is also in one piece, no waterline option is available 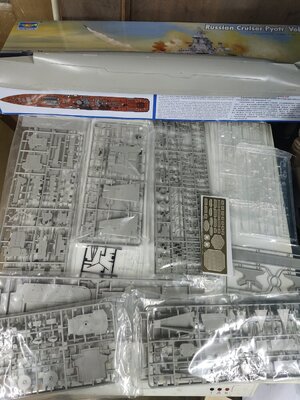 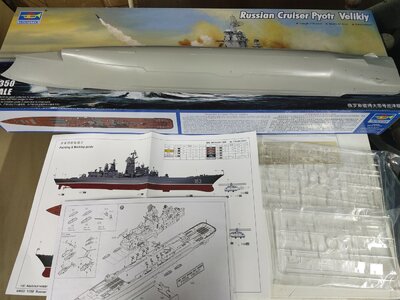 The PE parts as expected are more than the previous kit and certainly they wil take this ship to another level of details. The railings provided could be enough for two medium size 1/350 ships. 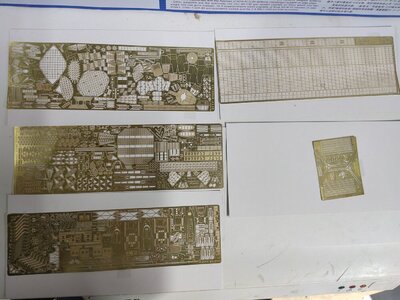 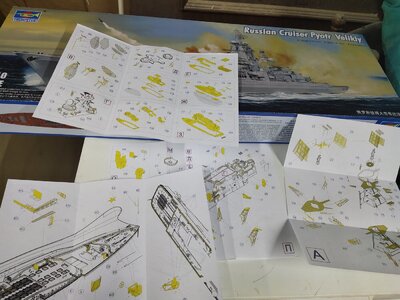 Finally i took two comparison shots so we can better understand the size of the kits. Pyotr Velikiy is in the middle, Panteleyev on the upper side and Sovremenny at the lower. 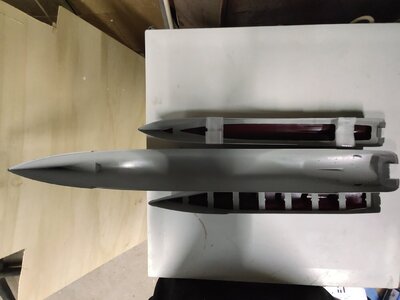 I resized Pyotr Velikiy to 1/700 and compared again. Still stands with dignity 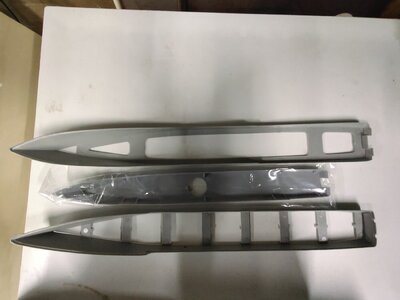