In summer this year, a previously unknown but very beautiful painting by Cornelis Verbeeck (1590 - 1637) was sold at a Swedish auction. It is dated to 1625-1630. Larger works by him are rare, so I don't want to withhold this link here. The resolution of the downloadable image is also very pleasing at over 4000px. 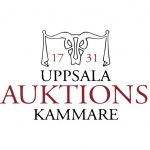 This beautifully preserved painting is a hitherto unknown work by the Haarlem marine painter Cornelis Verbeeck of circa 1625/30 and strikes by its precision in rendering the Men o’ war, its light tonality and its larger cabinet size format. Such almost miniature precision of details is characteristic for the artist, whose oeuvre is so far only small. Mostly on small size panels or coppers, there are only two paintings of similar size as the present painting known today. These are the beached ”Men o’ war with a city beyond”, oil on panel, 78.5 x 136 cm, in a Swiss private collection (RKD Explore) and ”the Battle between Spanish and Dutch ships”, oil on canvas, 93 x 137 cm, in the National Maritime Museum, Greenwich, inv. no. BHC0270. Both latter paintings are identically signed as the present painting: CVBH, which is to be understood as Cornelis Verbeeck Haarlem. This signature appears also on the painting of Dutch ships before Saint Helena in the Scheepvaartmuseum, Amsterdam (L.J. Bol, “Die Holländische Marinemalerei des 17. Jahrhunderts”, 1973, p. 51, fig. 51) and the painting of Ships near the coast in the Frans Hals Museum, Haarlem, inv. no. I-608.

Cornelis Verbeeck is no longer a household name among the Dutch painters of the Golden Age. Yet, as explained by J. Giltaij, J. Kelch, Praise of ships and the sea, The Dutch Marine Painters of the 17th Century, Rotterdam, Berlin, 1996/7, p. 137, in his own time he must have held a considerable reputation, since Samuel Ampzing in his “Beschryving ende lof der Stad Haerlem” of 1628 praises him as: “Verbeek is ook heel fraeij en net in schepen – malen” (Verbeek is a high quality painter of ships). Of his life not much is known other then that he was often engaged in rows. With Cornelis Claesz. van Wieringen and Hendrick Cornelisz. Vroom, Verbeeck counts among the early generation of marine specialists in the Northern Netherlands, whose contributions to the development of marine painting consisted of the panorama, in which Southern Netherlandish idioms were combined with the naturalistic tendencies of the North.

What is the message the painter wanted to tell "us" with this detail? (red arrow) 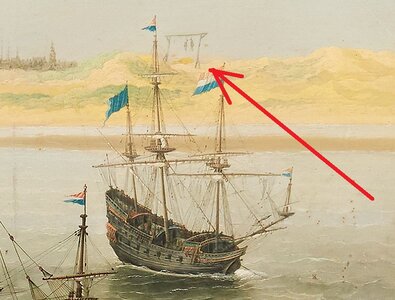 I remember there was some confusion in interpreting what was happening here. First we thought the city was Vlissingen (Flushing) with the fortress Rammekens on the side, but that did not seem to make sense. What would ships of the county of Holland have to do in front of the Zealand city of Vlissingen? Later it was found out that the city was Dunkirk and now the painting makes sense. To prevent the Dunkirk privateers to do harm to the Dutch trade and fishing fleet the harbor was blokkaded. Dunkirk was the basis for the Spanish warfare against the young Dutch Republic, with which it fought an 80-years long war. We won.
We have the marvellous opportunity here to see the ships that were used for this important, but sadly enough not too effective action. The painting was made around 1630, shortly before admiral Maarten Harpertszn Tromp improved the efforts.
Sometimes Dutch history is beautifully illustrated...

Is it possible to identify the ships?

Uwek said:
What is the message the painter wanted to tell "us" with this detail? (red arrow)
Click to expand...

I think there are 2 options:

1. Such things were normal in these days.
2. Maybe Verbeeck wanted to characterize the town as a "spanish" town (Dunquerque, see above), where delinquents were hanged more easily and quickly than anywhere else in the Netherlands.

Yes, we can say that, depending on the exact time the painting depicts, the dominant ship is the 'Frederick Hendrick'. Admiral was Philip van Dorp (1597-1652), a nobleman from Tholen, a Zealand island. He is not exactly the sea-hero we would like to meet. In fact he was bumbtious, willful and tactless, qualities that almost cost him his life in 1627, when a group of fishermen wanted to lynch him because of his bad performance in keeping away the Dunkirk corsairs, who took a complete fleet of busses and captured the crews. The blockade was no succes and the fact that we have this beautiful picture can probably be put on the account of the commissioner's vanity if it really was Van Dorp.

About the grim message Uwek pointed at: there is no other message than what we see on any view of cities of those days. There are always gallows with hanged criminals as a warning for visitors. Mind: the hanging took almost aways place on the main square in the center of town, but for practical reasons the decomposing bodies were transferred to a place outside the town to show the determination of the citizens to stick to the laws.

Ab Hoving said:
About the grim message Uwek pointed at: there is no other message than what we see on any view of cities of those days. There are always gallows with hanged criminals as a warning for visitors. Mind: the hanging took almost aways place on the main square in the center of town, but for practical reasons the decomposing bodies were transferred to a place outside the town to show the determination of the citizens to stick to the laws.
Click to expand...

I am just reading "The Bounty", by Caroline Alexander (excellent by the way). She describes the scene as Bligh returns on the Providence, from his repeat trip to Tahiti. As he moves up the Thames to Deptford, he notes that a few people ashore hanging from gibbets are visible from the ship, to the absolute shock and horror of a Tahitian passenger that had accompanied them to England. But other than the Tahitian's reaction, it didn't seem noteworthy.
Last edited: Sunday at 8:25 AM

There are also several passages in Pepy's diary mentioning executions. Sometimes the delinquent was very brave and collected and held a last speech which Pepys considered remarkable and noble though he was not of the same political opinion (most "delinquents" were political ones in these times, followers of Cromwell etc.). I think there is a passage in which he is faced with the decision to go to the execution or to the theater, but I'm not sure.
You must log in or register to reply here.
Share:
Facebook Twitter Reddit Pinterest Tumblr Email Share Link
Top