I have never had much patience when it comes to ship modelling. Also, I get bored very easily with particular types of ship. I could never spend my entire ship modelling experience building just one type or nationality. I overcome the boredom by moving through various different types built between the years of approximately 1830 and 1965, introducing a variety of types on the way. The ships produced before or after those years hold very little interest for me. Napoleonic warships have far too much fancy work and decoration for my taste and merchant ships of that era were pretty shapeless. Powered warships, I do not like simply because of the uniform grey colour all over. Merchant ships built after about 1965 also do not appeal to me and it seems to be a “point of honour” amongst designers to make each one uglier than the one that went before!
I get over the lack of patience by working very fast, and also having more than one hobby. I am deeply into vintage radio design and construction using valves rather than transistors.
Here are a few of my variety of models built over the years.
Very few people can understand why I never build famous ships. I have always liked the obscure or semi-obscure, the rank-and file ships, which in the words of Conrad, “would know no triumph, but speed in carrying a burden, no glory other than that of long service, no victory but that of an endless, obscure contest with the sea!”
The same went in real life. I went to sea in early 1961 and progressed from humble colliers to some of the finest passenger liners in the world, but then moved downward to a tiny 3,150-ton passenger ship sailing between the UK and South Africa with 76 passengers and general cargo. She was 16 years old when I joined and 27 years old when I left (when she was sold). The happiest years of my sea life! Take a voyage with me on U-tube. Click this link:
Turn on the sound for the doleful music!
More to follow!
Bob 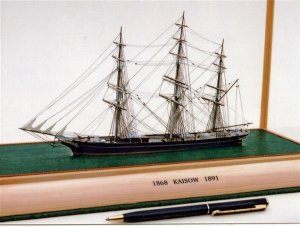 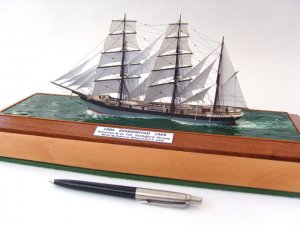 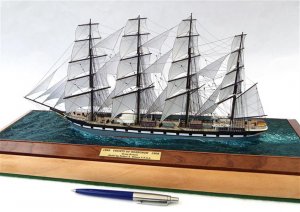 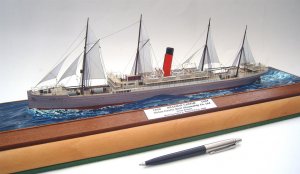 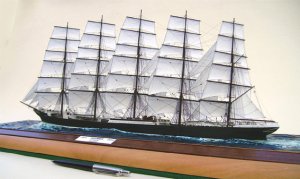 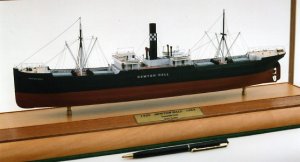 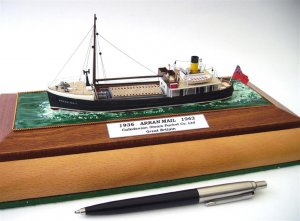 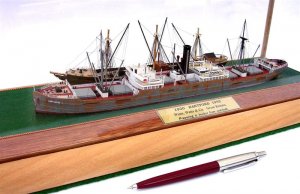 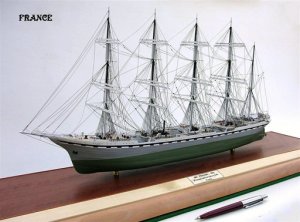 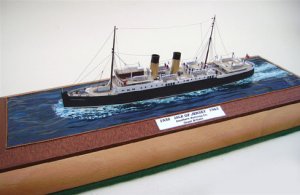 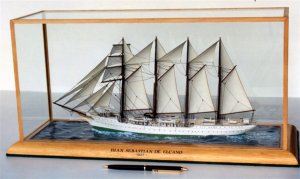 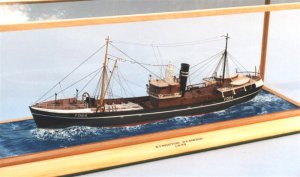 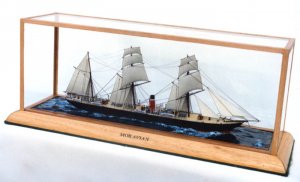 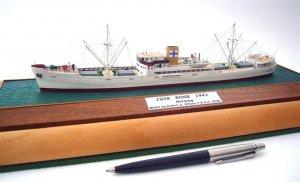 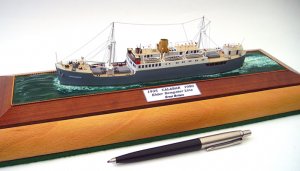 Thats just simply amazing - yes, I have seen a lot of your work - but still, each time - I see something I have not noticed before.

Five years on, and this section still seems to be in the doldrums! Am I the only one involved in building models of merchant ships? I no longer take them to the local ship model society that meets once a month because the interest shown is minimal. On the other hand, collectors love them! Within days of completing this iron barque, I had three people asking if it was for sale, although I never advertised it as such! One enquirer was in Europe, one in the US, and the third from the UK. The one from Europe got in first, so it will be on its way across the channel next week. Are these ships too ugly, too complicated, too boring or too simple for model shipbuilders, or is there another reason for their unpopularity amongst modellers?
Bob 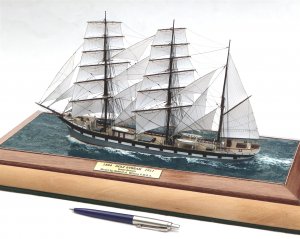 I would not say they are boring. Anyone interested in maritime history would appreciate what you have done. Then again there all kinds of diverging interests in the hobby and all kinds of model builders. I also see you are into vintage Parker pens. I sold over 500 vintage old stock Parker pens of all models on Ebay over 15 years ago.
S

The pen was just the most photogenic one that I could find! It doesn't even work now, being empty. It is only used for model ship photographs! Life in merchant ships was infinitely more interesting and varied than in warships, if anyone cares to read about them. Here is a FREE download for anyone interested - The Log of a Sea Waif - http://www.gutenberg.org/ebooks/36657 It was written in 1899. It may be put in e-readers or tablets, and I can recommend it, but I doubt whether many will do this!
Bob
A

Thanks, I have the Gutenberg app on my IPad and will download the book.

Thank you for the link, I’ve downloaded the book.
S

Hope you enjoy the download, there was a lot more interesting things going on at sea than cutlasses and cannoballs! There are lots of similar free books on Gutenberg.
Bob
A

shipbuilder said:
Hope you enjoy the download, there was a lot more interesting things going on at sea than cutlasses and cannoballs! There are lots of similar free books on Gutenberg.
Bob
Click to expand...

One of my other interests is old films and I particularly like the many excellent films from the 1920’s and early 30’s which depicted happenings and adventures on the seven seas. Lots of colour and tales of life aboard liners, fishing boats, tramp steamers and foggy rough house ports at the time when the greater world was still mysterious, dangerous and exotic and only accessed by boat. Most are forgotten now and rarely seen these days let alone retold.
Last edited: Jun 16, 2018
S

There are also lots of old movies on Utube, and we watch a lot of the. One excellent one is The Mutiny of the Elsinore, set aboard a four-masted barque. It was made in the 1930s, and the film company chartered the four-masted barque Moshulu to film it aboard. I was very lucky myself in going to sea in early 1961 when sea life was pretty much like it had been 40 years earlier. I served in two colliers, three cargo ships, one bulk carrier, two iron ore carriers, one log carrier, one oil tanker and a number of large passenger liners and one cruise ship, doing my final 13 years aboard the small passenger liners RMS St. Helena (I) and RMS St. Helena (II), sailing from the UK to Cape Town . My sea time included 13 months in the Falklands, 1982, an almost disastrous fire aboard, followed by a one-month-long repair in Dakar West Africa. My wife was able to sail with me free of charge any time she wished! I finally left at the age of 48 in late 1992 because my profession (radio officer) was being phased out because of satellite communications. I then took up ship model building full time, and shortly after, began writing (numerous articles, and several books). They were wonderful years, full of adventure and romance. But whenever merchant navy models appear at the local ship model society, eyes glaze over, and the subject drifts back to the ever-popular warships. This is a Utube presentation of my last ship making her final departure from St. Helena, before being sold. Bob
Last edited: Jun 17, 2018

The ship has since been sold, and is now called MNG Tahiti. She is now an anti-piracy support ship, stationed in Somali waters. My first acquaintance with the island of St. Helena, began in 1974 wehen I spent two years aboard the RMS Good Hope Castle, an ocean greyhound that could get from Southampton to Cape Town via the Canaries, Ascension and St. Helena in 11 1/2 days, at a speed of 23 1/2 knots, followed by 11 years service in the old St. Helena, and two years service in this one - happy days - Bob 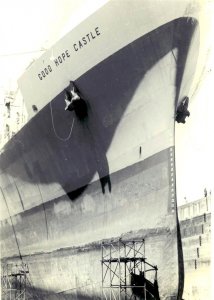 What a great career and wonderful way to see the world. My time on the Oceans is scant compared to yours. Two round trip voyages on the Atlantic via Military Transport and one voyage from South Carolina to Qui Nhon via Military Transport. All done in the 60’s. The highlight of the trip across the Pacific was going through the Panama Canal.
S

Here I was in 1968 aboard Nina Bowater in Charleston, South Carolina after an extremely arduous voyage from Liverpool - bad weather all the way there and back, but sunny and warm in Charleston.
Bob 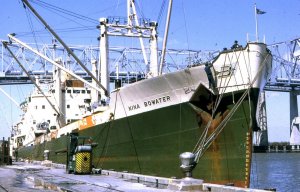 I well remember my ride from Europe to New York in the middle of March of ‘64. Over three quarters of the troops on board were seasick for the entire crossing. Rough seas the entire trip.

My trip across the Pacific was great, long gentle swells all the way. We spent many nights topside sleeping under the stars. 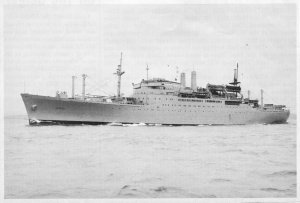 The Geiger. Across the Pacific. 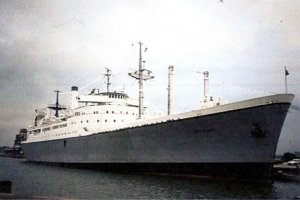 The Upshur. Across the Atlantic.

Vry nice lines, but would have been better looking with more conventional funnels.
Bob

Well, for one thing. I always admire your work. I also love those types of vessels myself. Even though I have none on my workbench, that does not mean that I do not like these types. When my wife and I go on a cruise, I love watching the tankers pass by.
You must log in or register to reply here.
Share:
Facebook Twitter Reddit Pinterest Tumblr Email Share Link
Top