I chose the construction of this model because I want to become familiar with cardboard as a material for model making. After building many wooden models, both kits and scratch, Ab Hoving inspired me to use cardboard as a building material. 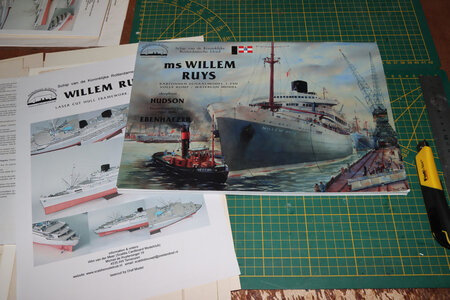 The Willem Ruys was the flagship of the Koninklijke Rotterdamsche Lloyd. The vessel measured 21,119 GRT, had a length of 192 m and a beam of 25 m. Machine capacity of 32,000 HP and a service speed of 22 knots. Accomodation for 840 passengers and a crew of 456 people.
The construction period was from 1930 to 1947. Construction was seriously delayed as a result of the war.
Together with the ms Oranje of the Stoomvaart Maatschappij Nederland, the Willem Ruys sailed in exchange service on the Dutch East Indies.
After the disappearance of the emigrant transport, the Willem Ruys, like many other liners, continued as a cruise ship, including traveling around the world.
In January 1965 the Willem Ruys was again sold, just like the Oranje, to the Italian shipping company Flotta Lauro and sailed there under the name Achille Lauro

Construction has now started. In addition to the standard cardboard material, I also bought a number of sets of laser-cut parts, the laser-cut frames and longitudinal frames, laser-cut railings and a number of laser-cut small parts. 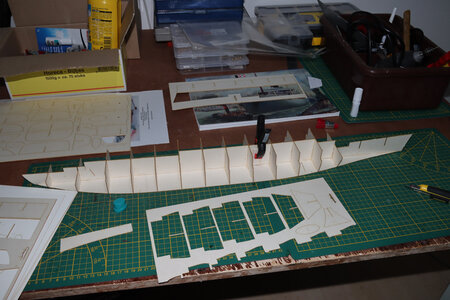 The laser-cut frames provide the frame for the hull without any problems. The fit is excellent. 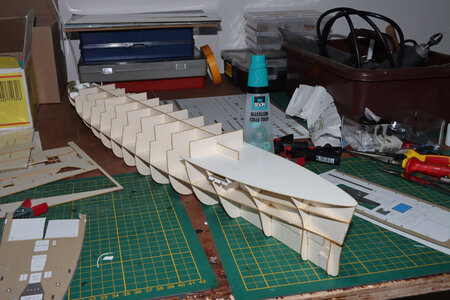 So far it is very similar to the laser cut parts of a wood construction kit. 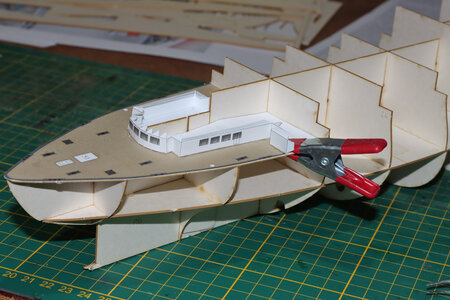 Placing the deckhouse and gluing the aft deck is easy. 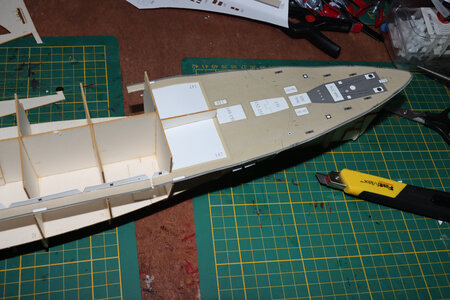 The first difficulty occurs when placing the decks in the gangway. It is stated in the building description, check the length of the deck parts before gluing and trim them if necessary. However, how to cut cardboard if the decks are too short is not indicated. I will have to camouflage that with paint and it will probably be largely hidden from view by the lifeboats that come here later.

I wish you a good journey and positive experience with the new material - Many thanks for starting this building log, so we all are able to learn with you
J

Hi André, I am also from the Netherlands and.. also busy (for almost two years now!) building the Willem Ruys, the ship that brought me in 1949 from the former Dutch Indies to the Netherlands! Two years is not because of the model, but I do also publish papermodels myself under the name of World of Paperships.
I find the kit quite good, with good to perfect fitting for a model of this size, but the construction is difficult due to the lack of good instructions. Wim van der Meer provides a comprehensive pdf file with Dutch instructions, but even then it is is difficult to find your way through all the sheets to find the correct parts. Esp. now during the placement of the lasercut railings I do find the instructions difficult to follow.I would really advice JSC who did the design to add more construction photographs. So, I had to do quite a lot of guessing and trying to find the appropriate railings by trial and error. But the result is spectecular. You will not find many finished models which is rather amazing as the Willem Ruys (in my opinion) is a beautiful ship, almost comparable to the ms Rotterdam in terms of beauty! 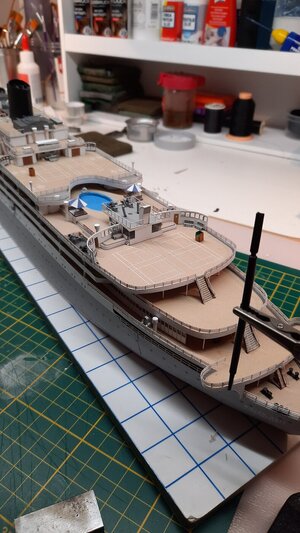 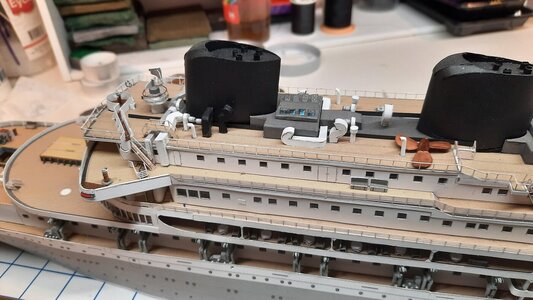 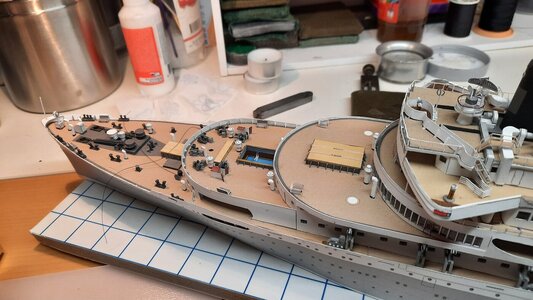 Hello @Jeroen This is Andre's build log, but we would love to see the progress of your Willem Ruys. Is it possible for you to start your own build log so we can follow the progress of Her development? What do you think?

@Jeroen that's a nice model you have made.

I was already on my way when I started to doubt the quality that could be achieved in this way with the underwater hull. After careful consideration, I decided to go for a waterline model. And then you immediately run into one of the major problems of this method of modeling. What has been pasted is permanently fixed and minor corrections are possible for a short while after the parts have been pasted together, but after a few minutes no more corrections are possible. My decision to go for the waterline model also had the consequence that I had to start over with new material.
Anyway, we are already well on the way. The pictures speak for themselves. 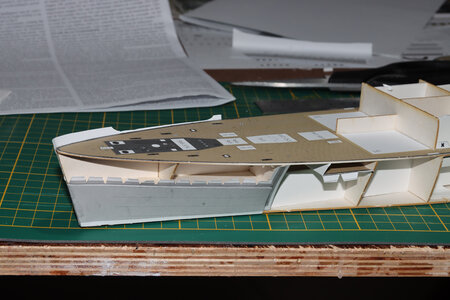 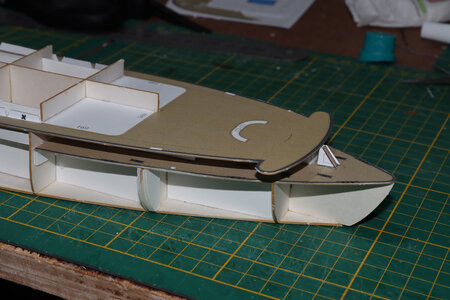 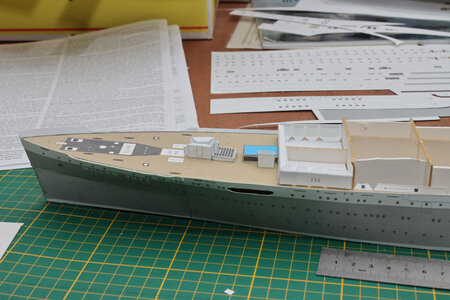 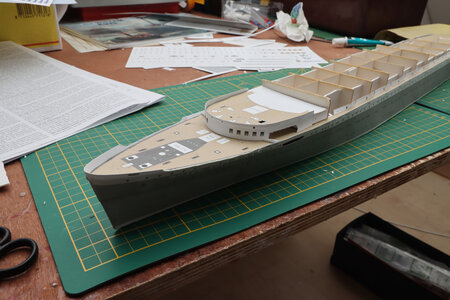 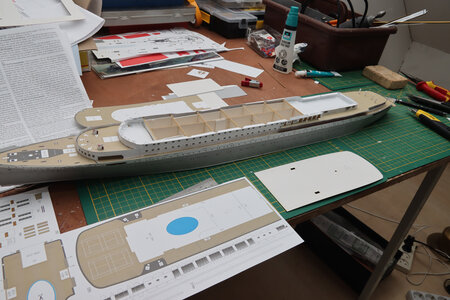 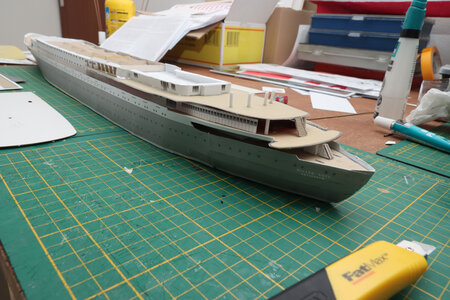 In total, more than 500 parts have to be mounted. We are now over 200 so drawing is starting to come into play.

This is the last update in this thread. I continued to build, but the pleasure in building with cardboard became less and less, a lot of effort and the result remains disapointing. The choice for the Willem Ruys scale 1: 250 may not have been so fortunate either. I have decided to end this project and to add the result as a UFO.
The last photos. 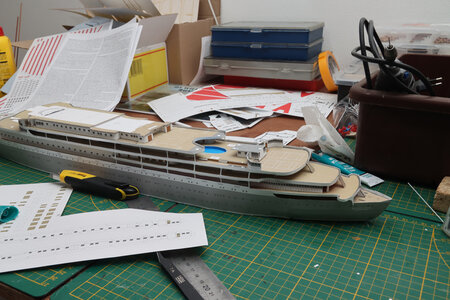 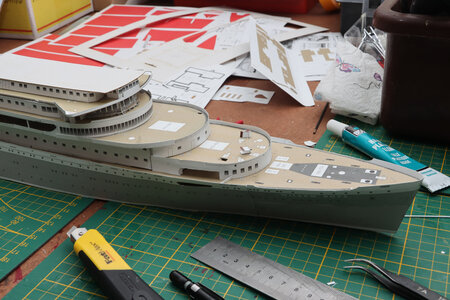 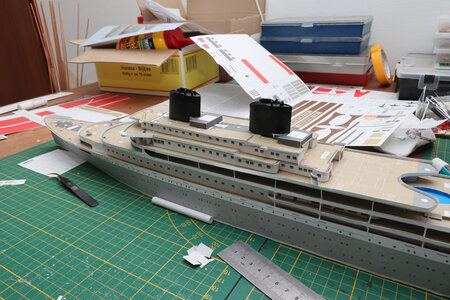