A Tour through my little model ship world

Just a few words about myself. My youth fell into the heyday of plastic model making. At that time I built sailing ships in particular, including the classics from Airfix and Revell, which had just come onto the market at the time. My special love was the sailing ships of the French company Heller, some of which were designed after models from the Paris Naval Museum. (I was able to examine the originals only 45 years later.)

I have a long and eventful career as a model maker, which I do not want to describe in detail here. Just this much: about 10 years ago I returned to plastic model making, with the intention of building my favorites from back then, but with the knowledge and techniques that I had acquired in the meantime (especially through the Internet!).

Typically, one of my first models from this phase was the large Chebec from Heller (1:50). I didn't build it, however, just out of the box, but tried to tell a little story with the model. In Patrick O'Brien’s first marine history novel, Captain Jack Aubray hijacks a Spanish chebec frigate. He hopes in vain to get command of the ship. I've now built the Heller model as it could look after the Royal Navy adjusted it to their standards. The playful ornaments have largely been eliminated, the color scheme has been adapted to the Nelson Checker, the ship carries carronades instead of cannons. Here are a few photos.

When I built the model, I hadn't yet mastered the oil paint technique that Herbert Thomesen (Artitec, Amsterdam) developed for his resin models. In addition, the model looks a bit “cleaner” in the photos than in the original. Today I prefer stronger, darker colors with stronger shadows.

PS: Although I have a lot to do with language at work, my English is hardly trained and is slowly rusting away. A translator on the Internet helps me. If anything is still unclear, please ask.
S

That's positively inspired, Schmidt! I like the "HMS Rose" style colors, the carronades make total sense in context of the period and the Royal Navy's presumed missions for this vessel. Someone should even write up some fan-fiction for some of her cruises.

What would you name her? "HMS Cadiz"?

A very good looking model - hope to see much more of your work, so do not stop with your tour .....
S

Thanks for the comments!
Another possible name for the Chebec would be HMS Malta, a name that was later used in the Royal Navy.
The second model that I would like to introduce here also belongs in the Mediterranean and is only about 50 years older. I had my first contact with the galley “La Reale” around 1970. The model was not available in my hometown in Germany, but at that time my great-aunt Adele lived in Amsterdam and she bought the model for me in the then famous model shop Merkelbach on Kalverstraat to send it to me by post. That was globalization around 1970. However, I fear that as a boy I failed because of the model. 40 years later I wanted to do better. This included separating dozens of parts that are similar but slightly different from one another very well, because the whole architecture of the row benches depends on these parts being in exactly the right place. I've shown the model again without the sails to draw more attention to the hull. I made some changes, for example I made oars with correct handles. The hearth fire and stern light are lit, but the lighting is very delicat.

Beautiful work, and we would love to see more.
.

Your work is truly outstanding, Schmidt! I really love the adaptation of the Chebec, and the distressing of La Reale is first-rate. All very impressive.

The next model I would like to present is the French warship “Phenix” from the mid-seventeenth century. The model marks a milestone in the history of plastic models of sailing ships. The Heller company constructed it in 1968 on the basis of plans that were published by the Friends of the Paris Naval Museum and are still available today. These plans do not refer to a real existing ship, but to the images in the "Album Colbert", which was a kind of sample catalog for the new construction of the French fleet around 1660. The name "Phenix" refers to the figurehead. In the "Album Colbert" the construction of such a ship is shown in several detailed pictures step by step, so it made sense to draw a corresponding plan, which then led to the Heller model. In contrast to the galley “La Reale”, I was able to buy this model in a model shop in my hometown around 1970. The model has been kept by neighbors for many years and is now with me again. It was a role model and a challenge for the one I built a few decades later.
I used the "Album Colbertl as a guide to make some changes to the model. In the front in particular, both the draftsmen of the plans and the designers of the model did not interpret the “Album” quite correctly. But the web is now full of examples of the typical design of French ships of that time, and I was able to orientate myself. The “Phenix” was one of the first models in which I sanded the entire surface of the ship's side and deck in order to be able to show a true-to-scale grain and reasonably harmonious planks. The model was painted with the usual model paints (Humbrol etc) and treated with oil paint after a long drying time. I have shown the rigging in a reduced condition, with the top masts down, in order to draw more attention to the hull. The model is presented in a stand, for which I have seen models in several marine museums (Paris, Toulon). In this way you can create the impression of a waterline model and still keep the hull completely.
The last photo shows a comparison between the model from 1970 and the one from 2019. I have certainly not reinvented model making, but I think I was able to show the potential of the old kit. 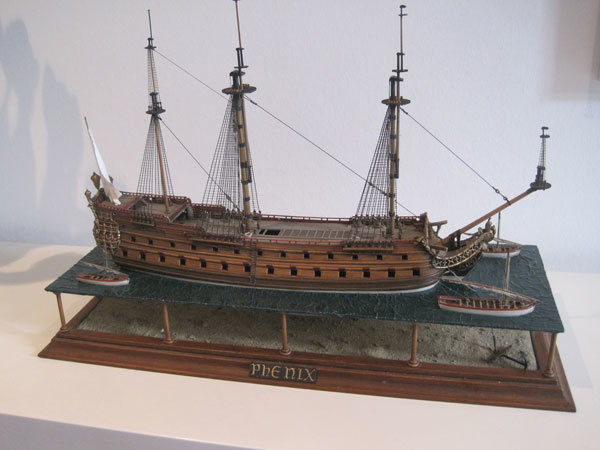 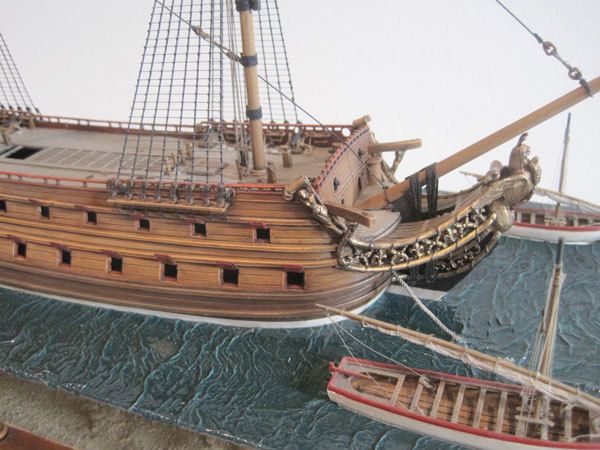 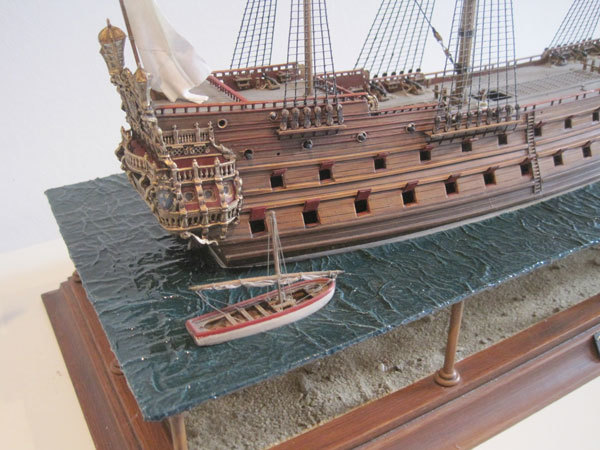 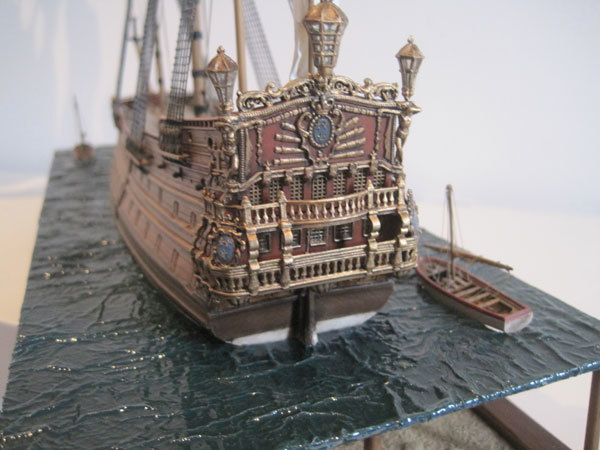 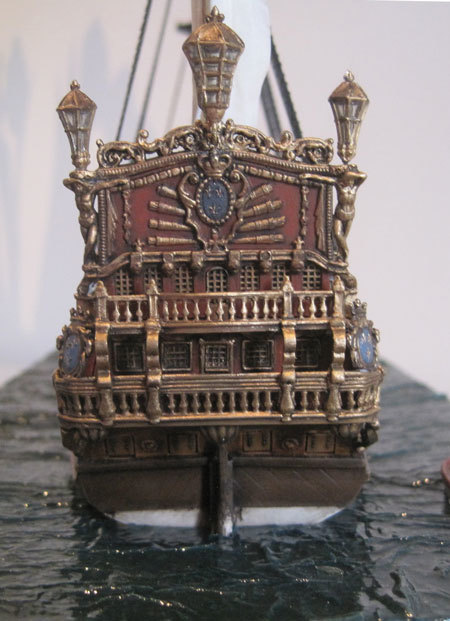 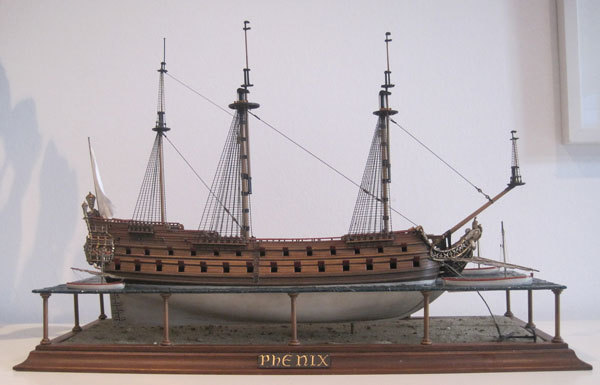 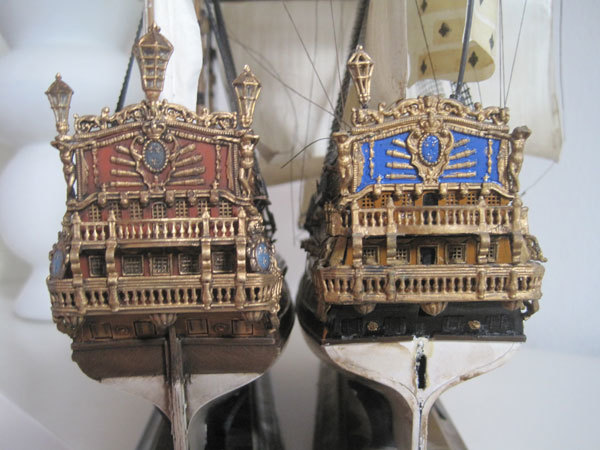 It is so interesting to me how much this particular model is improved by setting it in a sea, on its waterline. I used to have this kit in my stash, but sold it when I moved into my, then, fiancé's studio. I liked the kit, but always felt the sheer was a little too flat. What you have done with it, though, is pretty remarkable. I especially like your treatment of the dark stuff, on the lower main wales. The use of red ocher on the upper works, according to most of what I’ve read, was more commonly the case than the blue we are accustomed to thinking of for these large French ships. I also love the ship’s boats. What Heller does a very good job of, in this kit, is re-creating the best of the stern drawings from the Album de Colbert. The early head arrangement is also well done. Very nicely done!
Last edited: Oct 30, 2020

Next I would like to show a model of the Dutch Staatenjacht Utrecht (1:87 scale). The template is a replica based on plans from 1748, the ship itself is based in Utrecht and can be seen on the IJsselmeer in the Netherlands in summer. The model comes from a resin kit from Artitec (Amsterdam). There isn't much to build here. Almost the entire hull is a single part. But there is much to paint! The surfaces have a true-to-scale grain, the ornaments are very authenitc and very detailed. From the owner of the company Artitec Herbert Tomesen I (as well as Hubacs Historian) learned to paint the model, first with Humbrol paints, then an overlay with oil paint. The sails here are still made of tissue paper, now I use a laminate made of Japanese paper and silk.

Thanks for sharing your work, Schmidt. The 'Phenix' looks well laid up in a none commissioned state. A splendid diorama setting. Just goes to show plastic can be fantastic.

Schmidt said:
Next I would like to show a model of the Dutch Staatenjacht Utrecht (1:87 scale). The template is a replica based on plans from 1748, the ship itself is based in Utrecht and can be seen on the IJsselmeer in the Netherlands in summer. The model comes from a resin kit from Artitec (Amsterdam). There isn't much to build here. Almost the entire hull is a single part. But there is much to paint! The surfaces have a true-to-scale grain, the ornaments are very authenitc and very detailed. From the owner of the company Artitec Herbert Tomesen I (as well as Hubacs Historian) learned to paint the model, first with Humbrol paints, then an overlay with oil paint. The sails here are still made of tissue paper, now I use a laminate made of Japanese paper and silk.

It is a pity that the Artitec company only offered very few of the models it had built for the Dutch East India Company's diorama on the isle of Texel as kits. Unfortunately to this day there is only one medieval cog besides the state yacht. Years ago a pinasse was announced that has not yet appeared. I built the model of the state yacht twice and tried out various painting techniques. I made a mold of the second model and built two variations from it. Number one is a half hull model, as it used to be made in order to be able to present designs of hulls in a space-saving manner. My direct model was such a half hull model in the ship chamber of the Reijksmuseum in Amsterdam. 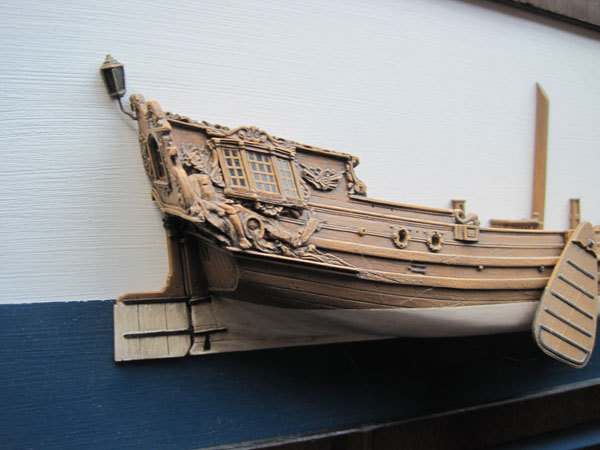 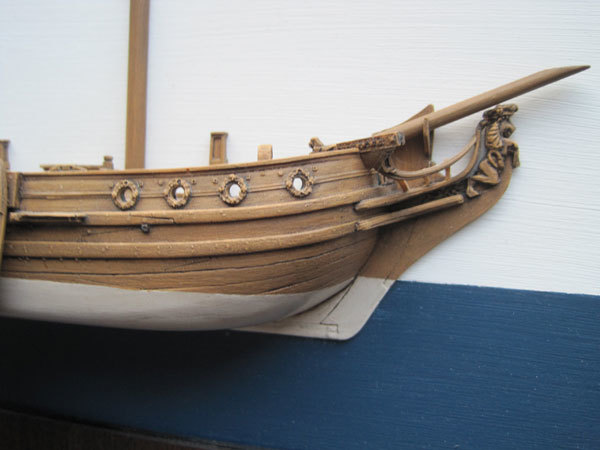 Variant number two shows a state yacht sinking after a storm. The hull is sunk into a styrofoam plate. In the meantime this little diorama has been dismantled into its individual parts without damaging the hull. This has to do with my newly developed photography techniques, which I will report on later. 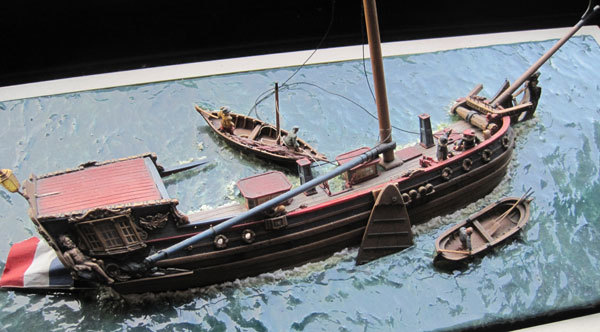 @Schmidt
Stumbled upon this blog post, thought of your HMS Cadiz/Malta build and made my way back here to share it.

A British frigate, HMS Nightingale, fought a furious battke with a French oared galley in the Thames Estuary in 1707 to protect a large merchant convoy.
dawlishchronicles.com
S

What a coincidence! Only a few weeks ago I read the above-mentioned book by Jean Marteihle, who was a convict in the galleys of Dunkirk and Marseille from 1700 to. It is one of the very few descriptions of the life and use of these ships that has been written by eyewitnesses. Whatever terrible things were known about life on board is surpassed by these depictions. I found it particularly impressive when the author described how the galleys had not been successfully manned by volunteers who were not allowed to be beaten. It was only the constant fear of being beaten with a whip that drove the convicts to the achievements needed to make these vessels rather effective warships. The more or less unsuccessful battle against HMS Nightingale is described in particular detail in the book.
I have already expressed my regret that the company Artitec has put so few models of historical sailing ships on the market. One of them is the model of a medieval cog, the model of which was found by archaeologists in a Dutch river. I built the model from the kit without any changes and strictly according to the instructions and then placed it in a waterbed made of polystyrene. 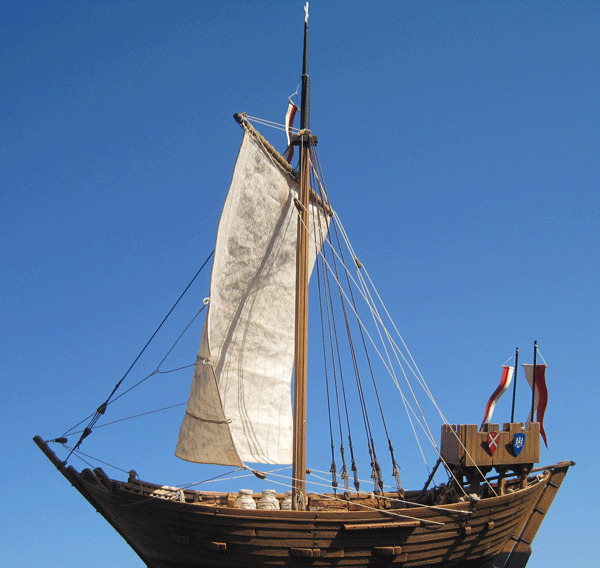 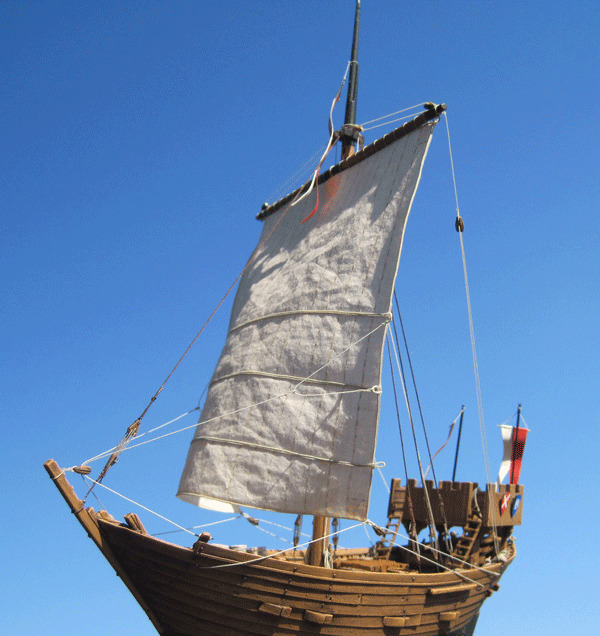 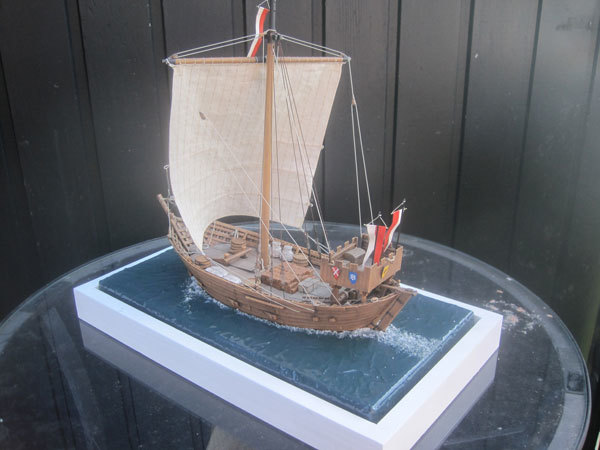 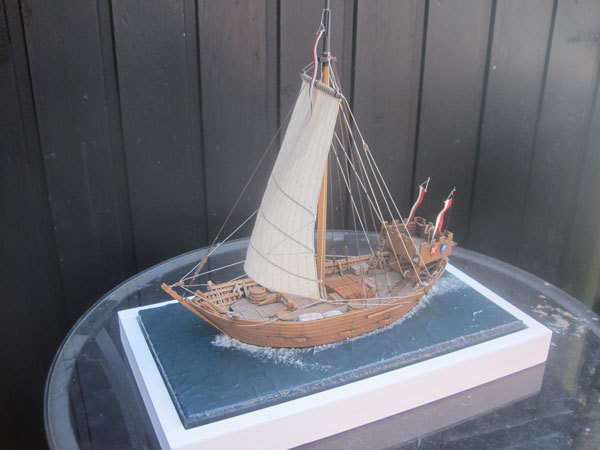