Info at youtube:
This model is one of the world's most magnificent older models. In this video we show the detailed inside, filmed with endoscopy camera.
The model was built in the latter half of the 1600s, probably by carving master Jost Schütz at Stockholm's shipyard.
The model, which is in scale 1:20, depicts a two-deck line ship with 50 guns. We do not know for sure which ship is the model. Previously, it was adopted to represent the warship Amarant (1654), but the dimensions do not match. It is possible that the model was a more general depiction of the vessel type.
The magnificent model is a fantastic piece of art and must have cost considerable sums to produce. It not only represents the hull, but a fully equipped ship with rig and hoisted sails. The cabin is also fully furnished with tables, chairs and bookshelves. Along the walls are even rolled charts and guns.

additional info:
the model was restored in the year 1896 (in several details not very good) 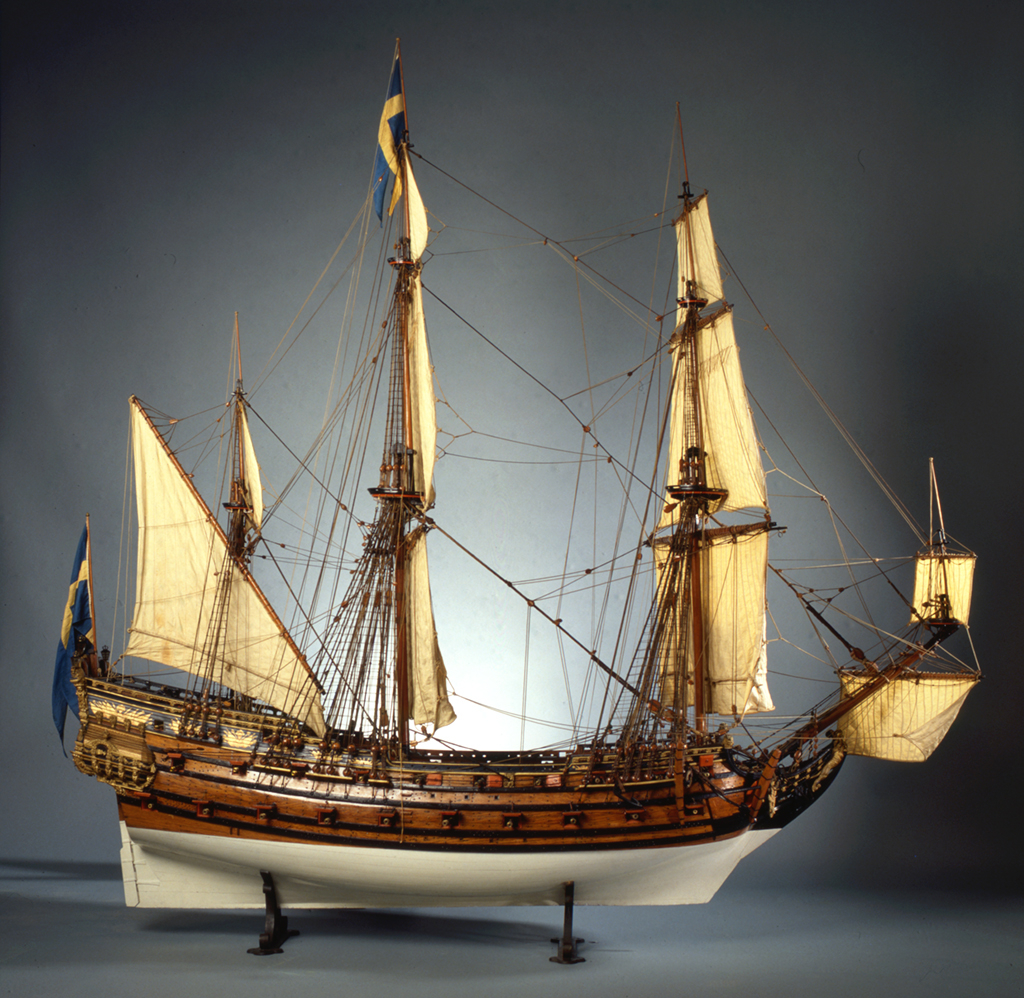 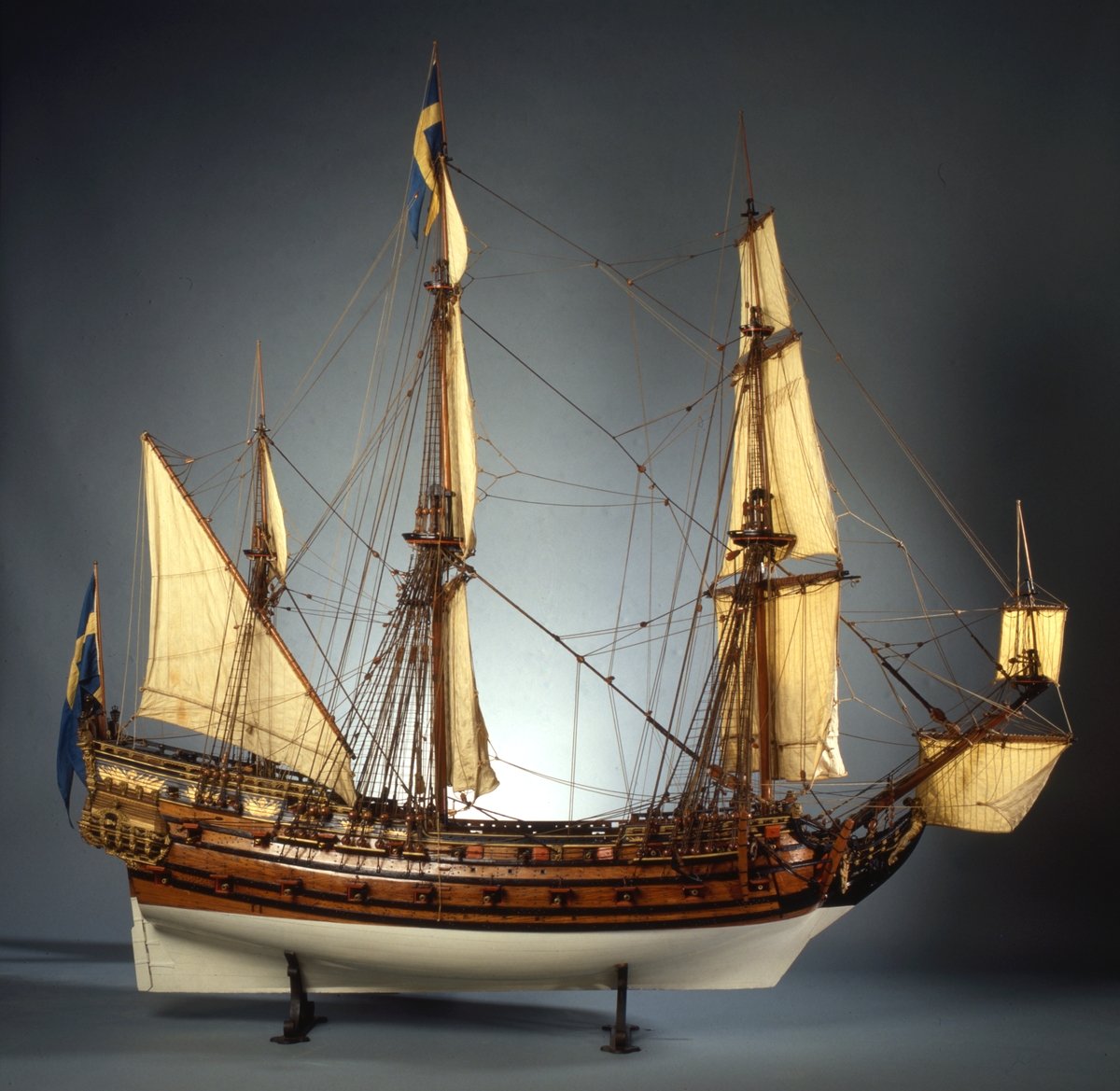 translated text from the museum:

When Sea History was to be built, one of the requirements was that there should be space for the museum's large collection of war models. Today, a selection of these is shown in the exhibition Clear Ship. The models tell about the Swedish fleet's vessels from the 17th century until today. In the first part of a series of articles we learn more about a mysterious and magnificent ship model from the late 1600s. 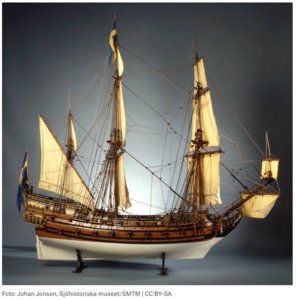 This 1:20 scale model is one of the museum's more enigmatic, while being one of the world's most magnificent older ship models. It was built sometime in the latter half of the 17th century, probably by carving master Jost Schütz at Stockholm's shipyard.
The present splendor may be partly derived from the imagination of the admiral and marine painter Jacob Hägg. He led the restoration of the model for the Stockholm Exhibition in 1897. During the work, large parts of the original rig were replaced because it was too damaged to be repaired.
Parts of the carved decoration were also replaced, which means that today we do not know if the model still retains its original decoration and color scheme.

Which ship really represents the model?
From the middle of the 17th century and for about 200 years onwards, the so-called liner ships were the largest and most heavily armed type of naval fleet. In the past, boarding had been the most common way of defeating ships in battle, but as the ship's artillery developed, the line tactics developed. This involved the fleet sailing on a long line and striving to get at an angle to be able to fire the enemy with wide sides.
The model shows a two-deck 50-gun liner and it has long been speculated in which vessel may have been the model.
For a long time it was believed that it was Amarant, which was built on the Skeppsholms shipyard and launched in 1654. Amarant was about 37 meters long, had 50 guns and a crew of about 200 men. However, recent research has shown that Amarant's dimensions do not match those of the model, and this theory was written off.
It has also been suggested that the model should be built by the Dutch shipbuilder Pieter Croon and represent the ship Spes from 1666. 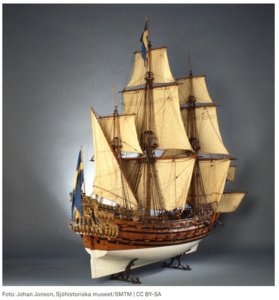 Detail in abundance
The model differs markedly from the so-called hull models of the 17th century. It not only represents the hull, but a fully equipped ship, with rig and hoisted sails.
The cabin is also fully furnished with tables, chairs and bookshelves. Along the walls are even rolled charts and guns. This magnificent model must have cost considerable sums to produce.
This, according to a third theory, suggests that the model was never manufactured to depict a particular ship. Instead, it should have been a piece of art - meant to be displayed and viewed.
In this film, recorded using an endoscopy camera, the model's fantastically detailed interior can be seen. 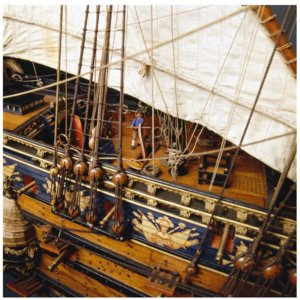 some drawings are also available online from the museum 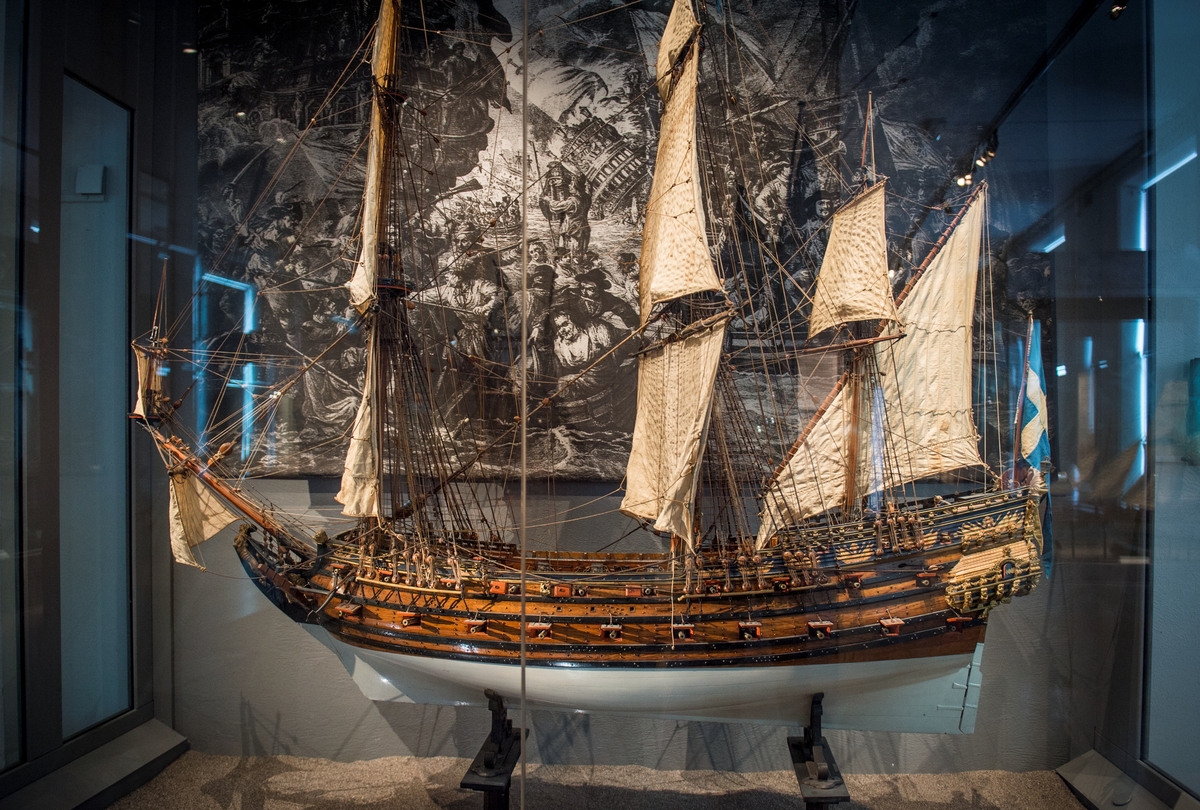 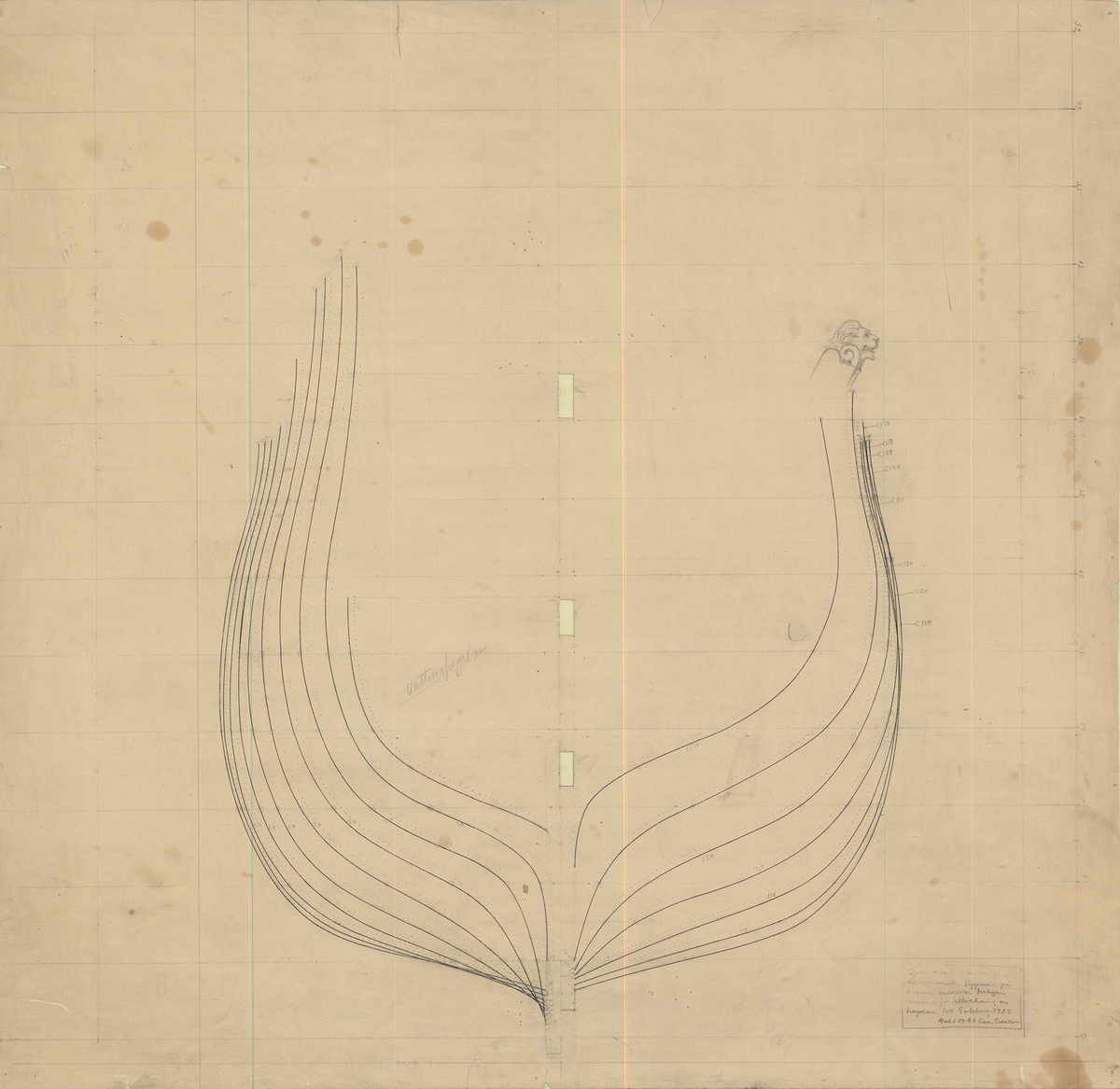 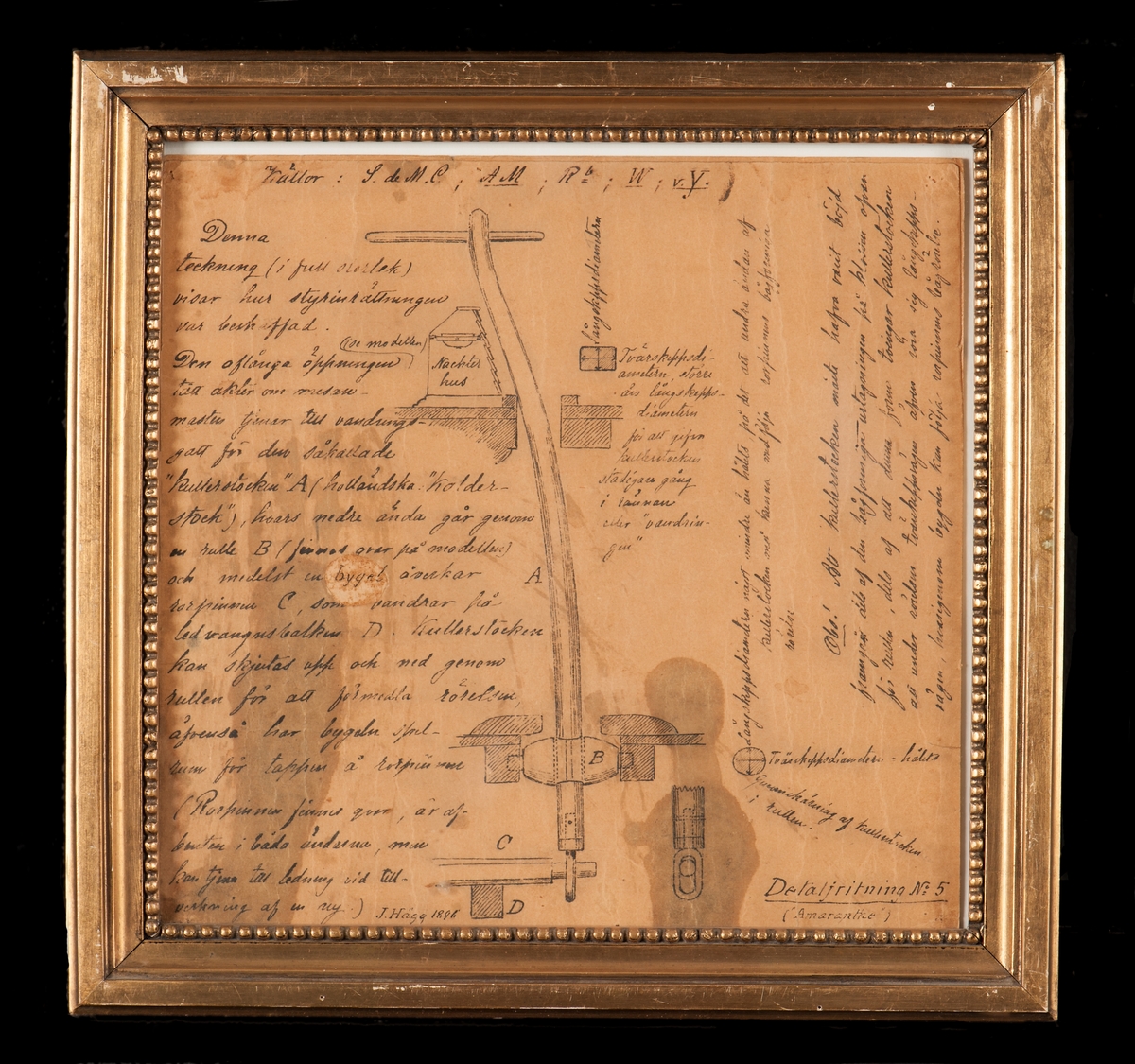 I know, that my friend and also member Alexander, alias @Foxtrott visited the museum and made some photos of the model, maybe you could share them here with us as well ?

Uwe, thank you very much for the comprehensive information about this model.

As far as I know, the model in the Maritime History Museum is now titled as "Two decker of the 17th century" (the Swedes count the centuries differently, which is why it is called "1600-talet").

The model was restored in 1896. Not particularly professionally, as was unfortunately common at the time. This explains the historicised painting and the outdated furniture. There are certainly more anachronisms to be found. Too bad for the model.

Here are some pictures. 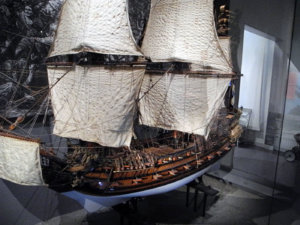 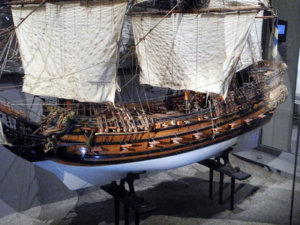 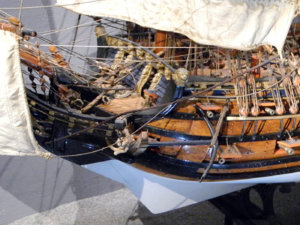 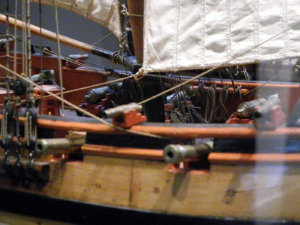 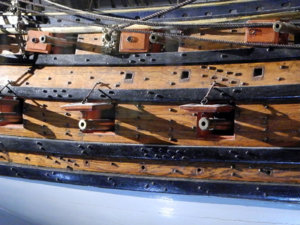 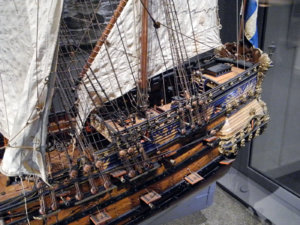 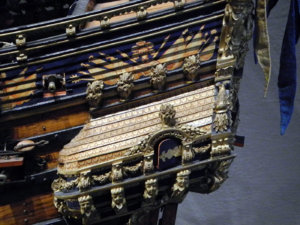 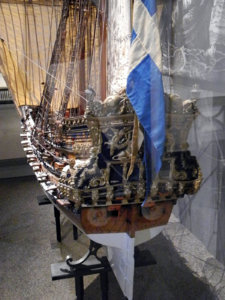