Falls of Halladale - 16 feet to 1 inch (1/192)
This is a model that was built when I was still struggling in 1993, having quit the rat-race of full-time employment the previous year for a more subdued life as a ship model builder and writer. Initially valued by Christie's auction house, London at £900 - £1,200, it failed to sell at the first two auctions, being withdrawn by the auctioneer after bidding had reached £500. At the next sale, it was again withdrawn, having only got up to £200! It finally sold on the third sale for £300! Similar models that I built years ago are now fetching enormous prices when they re-appear from time to time. 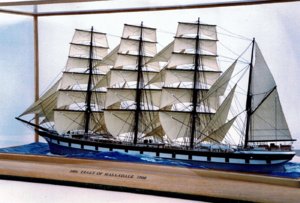 Very poor price when you take into consideration that I had to pay £25 to send it to London, plus about £25 for the catalouge fee. Then have 15% deducted for the seller's premium, and then the income tax took 20% of whatever was left. Look at this one, it only took 33 hours to build and sold for £780, and I never considered it to be particularly good - 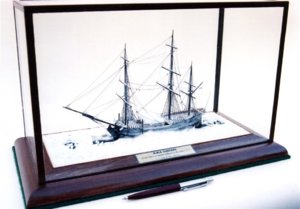 I admire all your builds, from the first to your latest. I think they are all excellent.

Here is another flop. The passenger liner Klipfontein, that took 86 hours to build and sold at auction for £345. I haven't sent them to auctions for years now, because the deductions reduce the profits to an unnacceptable level.

I think we were all struggling during the recession of the early 90s. Still you were able to get an initial bid of 500 pounds during that difficult period.
S

Yes, but it wasn't accepted by the auctioneer, and I ended up getting £200 less at the third sale!
W

I think you raise an interesting topic Robert concerning being a professional modeller. I regard your modelling as an art form fully compatible with other recognized art forms, the only difference being the medium. Your modelling has taken many, many years of work and hard-earned experience through mistakes to achieve the level of perfection your models show today. I certainly don't regard your attitude to buyers as being, amost other things, 'mercenary'. You don't surprise me in the slightest at some of the reactions to your models and prices. As some say where I come from originally: 'Owt fu' nowt'. I'm always pleased when you share pictures and anecdotes of your models - keep sending them please!
William (DK)
S

Thank you William. I should add that although I often get requests to build certain models on a "name your own price" basis, I do not take them up, because I really do not like committing myself to private commssions at my age (75) especially in view of the eye problem of the past year (hopefully now fixed). Of the models of my own choice that I offer for sale when complete, I never even ask the minimum wage for.
As you say, it takes many years, and many mistakes to improve on the quality, but as miniatures take so little time to build, it is possible to achieve acceptable results on the first attempt, providing one looks at the special techniques used.
This is my first miniature, many years ago. It only took about two weeks to build, and was all done with a few hand tools, as I was at sea at the time.
Robert 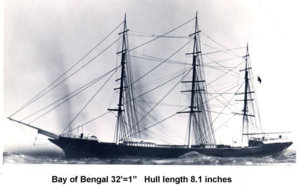 Thanks Robert. Even though it's an early model I'm always facinated with your rigging results. I've recently bought a couple of books on the subject of 1250 scale models and I'm sorely tempted. As soon as I'm finished with the tug I think I'll give it a go. On the subject of scale, I've got a sort of rhetorical question. When I find a suitable drawing of a ship I often enlarge or reduce according to whether I can model it with the details I think it ought to have plus the added fact of being able to make them. This can give some strange scale sizes but, if everything is keep to the 'scale' of the drawing, does it really matter? I've spent most of my modelling life building model railways (Gauge 1 mainly) which, by definition, requires that everything is built to the accepted scale - for obvious reasons. Question is: is it really necessay, when scratch- building a ship, to work to one of the accepted scales? It would be interesting to hear what others think of this.
William
S

I always print the plans to conventional scales, but as you say, everything remains in proportion whatever size you print them to, so the resulting model will be accurate. I do know a professional ship model builder that does exactly that, has the plans printed to the size that the client wants the model, rather than any definite scale. I must admit 1:1250 is rather too small for me. I find 1:384 (32 feet to the inch) is a lot easier. This is 1:384, and large enough to pile a large amount of detail in - Robert 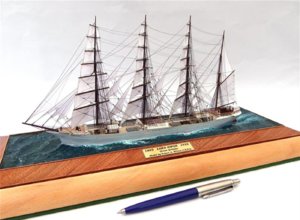 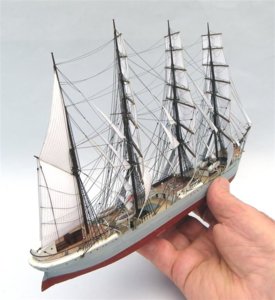