Hello everybody,
I start the construction report a little late, but I hope it is worth presenting.
To take a break from the "The Seven Provinces" I started building Armed Virginia Sloop 1768.
They were small units that evolved from the so-called Bermuda-Jamaica-Chasepeake Sloops (circa 1740), used for privateer, smuggling or as fast tenders.
Over the years, several studies have been developed (H.I. Chapelle, John F. Millar, Smithsonian Institution, F.H.Chapman) based on different sources and the construction of similar units. The finished wooden set was released by Model Shipways.
They were single-masted vessels, very fast, with sails similar to cutters. They usually had low bulwarks and a stern cabin with a rounded roof.
Total length not more than 60 feet, width 18 feet. They usually carried several light (3-pound) guns and half-pound swivel guns. The colors were typical for such vessels, ie yellow ocher, red inner surfaces of the bulwarks, "white stuff" in the underwater part, black rails and side reinforcements.

Without extending my graphomaniac art, the first few photos.

The hull structure is made of 1 mm cardboard, the stern with windows and the "false deck" with 0.5 mm. I did not give any additional waterline reinforcements, because the 1: 100 hull is only 18 cm long. 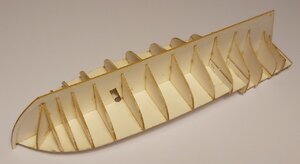 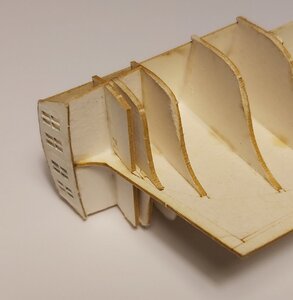 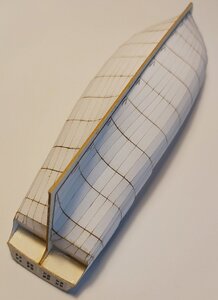 ...and on the hull prepared in this way, I glued the final planks. Each stripe consists of two planks, so there weren't so many of them and it turned out pretty well. Of course, adding a putty, more heart, patience and experience would have turned out nicer, but there are no "slim cow ribs", so the test can be considered successful.

To cover the bulwarks inside, I had a choice to "fight" with 1 mm cardboard or just stick spacer bars.
The second solution is definitely more convenient, because bending 1 mm cardboard causes it to "loosen" and thus it becomes thicker and even small errors can make holes (and these are many) not to fit together.
By sticking only the gun port frames and adding a few bars, I did not have to worry about a whole pile of small holes, because they fit, and even if they did not fit, you still can't see it.
A little precision was needed only when gluing the top part of the gun port frames - there is only 0.5 mm there, so you had to cut a 1 mm wide stripe from the cardboard of 0,5 mm thick and glue it horizontally.

Then I added a "thicker" board (a spirketting ?) and a waterway. I made it red (because I liked it in one report I found on internet) but it might as well be in the color of the deck.
It remained to glue the wales, reinforcements on the sides and the stern and handrails. I missed the color of these narrow "cobalt blue" stripes a bit - it is too dark and does not stand out enough against the black reinforcements. It was printed in blue, but in order to simplify the work, I painted it with this dark color. I will not tear off these bars or hair from my head in despair (because I don't have much hair).

The time has come to equip the deck and add artillery.
It's hard to write something original about gluing the simplest geometric solids, so just a few comments and observations.
- the steering wheel was cut with a laser, as well as greting;
- gun carriages are 1 cm long, I equipped them with 1.5 mm blocks and used UNI-Thread 6/0 W fishing threads for rigging them.
I'll hang the anchors after making the standing rigging. 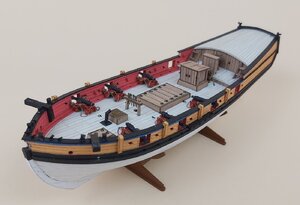 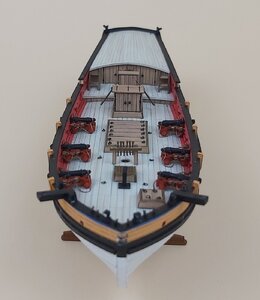 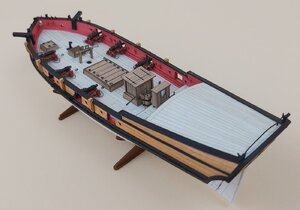 Brilliant. Looks like a larger and exceptionally well-planned kit such as those from Shipyard, rather than a scratch built miniature! Looking forward to seeing the rest...

Hello,
Standing rigging is almost ready - almost, because I will add both the topmast and the jiboom later. After looking at all the rigging it turned out that the gaff sail and the jib can be hung earlier, which is of course generally easier. In addition, I will change the course of the topmast stay in relation to what is proposed by Mr. Feldman in his book and Model Shipways, because the jiboom was a movable spar and connecting the topmast with the movable jiboom was a very troublesome and rare solution. In addition, it is suggested here to use a traveller and stretch the stay with it. Such a stay did not stabilize the topmast but only kept the upper leech of the sail so that it would not bend in the wind. The advantage of course was the very fast service of the boom, but overall it was more expensive and more ropes were needed for service. Thus, the fopmast stay will connect the topmast to the bowsprit top and the flying jib will be hanged without the any stay. (I wrote so much about an item that is not in the pictures yet - well, in the next update I won't have to write about it anymore
This freedom in the approach to the rigging comes from the fact that single-masted sloops were civilian units and, when entering service "in the army", were not subject to strict rigors and standardization. Besides, in the case of military units, compliance with the standards was not immediate and categorical either. 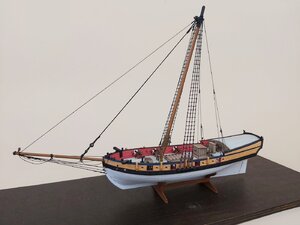 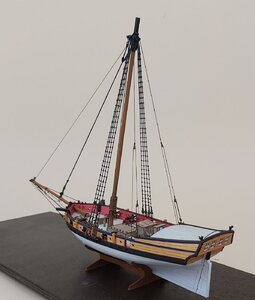 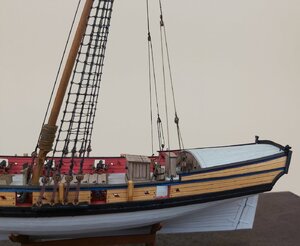 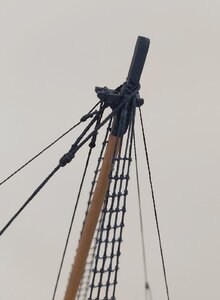 I treated most of the ropes and threads with beeswax (unfortunately only most and some of them have small hair).

Overall, this stage was remarkably easy, and there was no strong shouting that contained words commonly considered offensive or vulgar 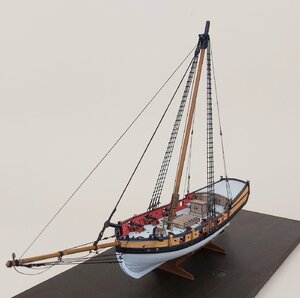 Now I will hang two sails.

thak you for comments and opinions.

Armed Virginia Sloop is finished. I decided that she would be on the side of the rebellious States around 1776. Rigging was not too difficult, there was easy access everywhere, so I dealt with it quickly.
She has even won a "skirmish" at the first model competition in many months (due to COVID-19).
Please visit the gallery: 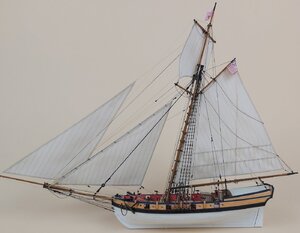 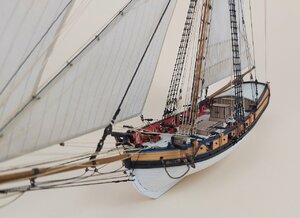 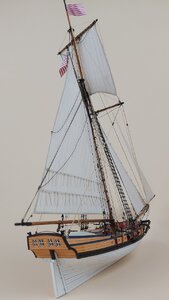 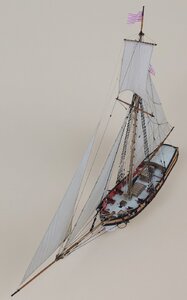 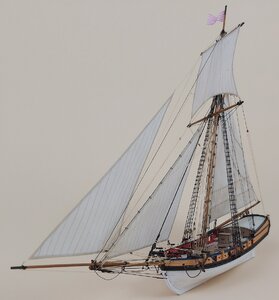 PS. Anticipating questions about a possible model release and date, I am pleased to inform you that it should happen in September (this year

thak you for comments and opinions.

PS. Anticipating questions about a possible model release and date, I am pleased to inform you that it should happen in September (this year

Hallo Tomek,
this is a really lovely model - looking great
Congratulations for finishing her - and also, that the release of the kit can be done already so fast - please keep us informed.
I am looking forward to your next project ......

Very well executed, I hope my Baltimore Clipper "Berbice" from the Model Shipyard turns out half as nice. I'm having to have a bunch of stuff moved around in my house in order to get my living room floor replaced before it falls out from underneath me and this paper kit surfaced after being forgotten for over a year. I really want to do this project as soon as space becomes available.

Thank you for your kind opinions.
The model is available 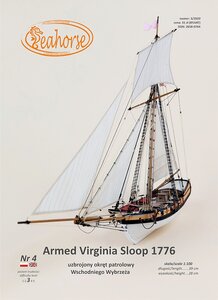