Book review Book Review: "JOHN PAUL JONES and the BONHOMME RICHARD, A Reconstruction of the Ship and an Account of the Battle With HMS Serapis" by Jean Boudriot

Book Review:
JOHN PAUL JONES and the BONHOMME RICHARD,
A Reconstruction of the Ship and an Account of the Battle With HMS Serapis
by Jean Boudriot
Translated by David H. Roberts 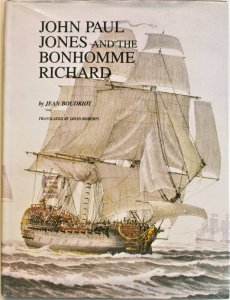 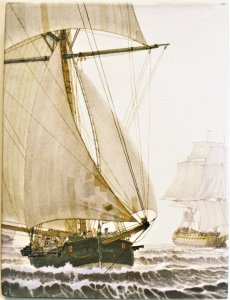 still available from ancre for a price of 48,00 Euro 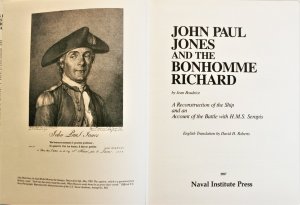 Ever since the Bonhomme Richard sank off Flarnborough Head after defeating HMS Serapis in 1779, there has been speculation about her appearance. Contemporary paintings and engravings are inaccurate, manuscript records are sketchy, and the original plans have not survived. Over the last 200 years the evidence has become dispersed , and is now to be found in public and private collections in Frànce, in England , and in America . Because Bonhomme Richard was a French ship, lent by Louis XVI to Captain John Paul Jones of the young American Navy, it required an unusual combination of talents to attempt the reconstruction: knowledge ofwhere to look for the elues; access to both French and English-language archives; a knowledge of the ships of the French East India Company ; the ability to represent the evidence visually, in a style which is bath clear and interesting; and a historian's skill to weigh facts which are sometimes conflicting, and place them within the context of the late !8th century.

In this book, Jean Boudriot has cal led on the talents of many people, from both sides of the Atlantic, to achieve the goal which he had set: nothing Jess than bringing to !ife the wreck of a ship which lies in the deep waters of the North Sea, reconstrucfing it timber by timber in a succession of drawings, and showing us, for the first time in more than two hundred years, the true appearance of the Bonhomme Richard on that fateful day in September 1779.

The sarne painstaking search for accuracy is found in every chapter: the first detailed account of the farnous and bloody battle with H.M.S. Serapis; an evaluation of the ship's sailing qualities; a discussion of the uniforms wom by John Paul Jones during those earl y years of the Arnerican Navy ; a series of masterful paintings which breathe !ife into the events which are recounted ; a series of computer drawings which allow us to look at the hull from every perspective; and finally a remarkable mode!built from Jean Boudriot's plans. Nothing like this has ever been attempted before. 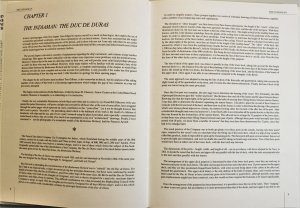 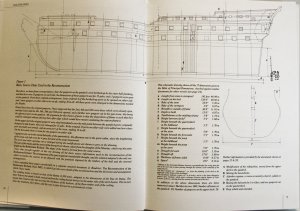 Frontispiece: John Paul Jones by J.M . Moreau
1 Schematic Sheer Draught
2 Timbering of the Hull
3 Duc de Duras: Arrangement of the Gunports
4 Bonhomme Richard: Arrangement of the Gunports
5 Close-up of the Hull Timbers and Gunports
Manuscript Sources
Draughts of the Massiac and the Bertin
Manuscript Sources
6 Body Plan
7 Sheer Plan
8 Half-Breadth and Horizontal Sections
9 Broadside View of the Ship, as Fitted Out
10 View of the Bow
11 View of the Stern
12 Profile of Inboard Works
13 Transverse Sections
14 The Lower Deck
15 The Upper Deck
16 Forecastle, Quarterdeck and Gangways
17 The Poop
18 Fittings: Guns, Capstans, etc
19 The Bonhomme Richard Under Sail
20 Fittings: 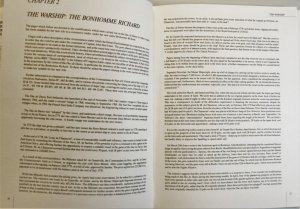 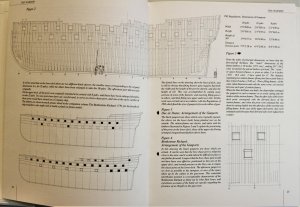 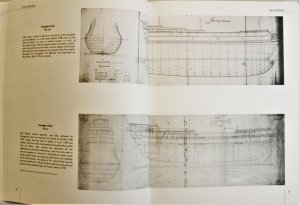 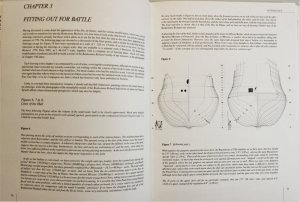 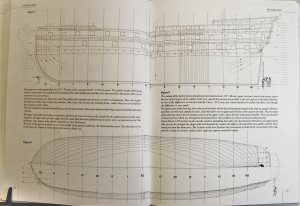 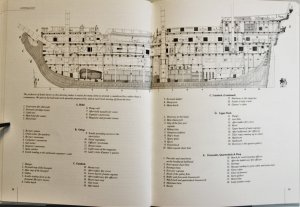 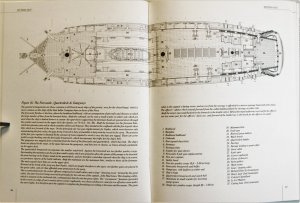 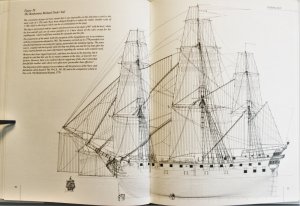 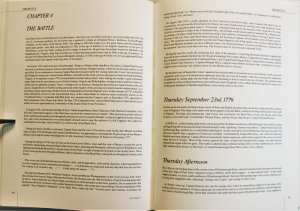 Book Review:
JOHN PAUL JONES and the BONHOMME RICHARD,
A Reconstruction of the Ship and an Account of the Battle With HMS Serapis
by Jean Boudriot 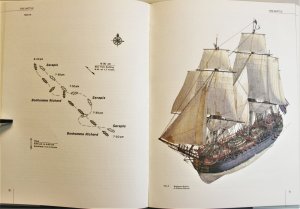 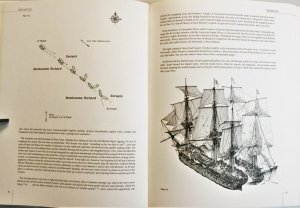 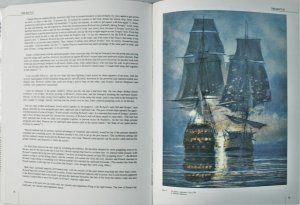 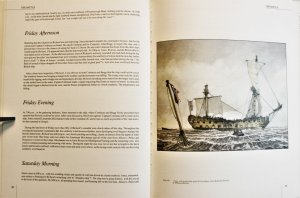 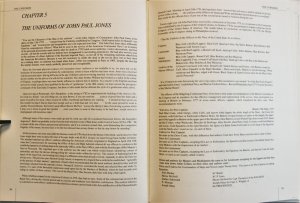 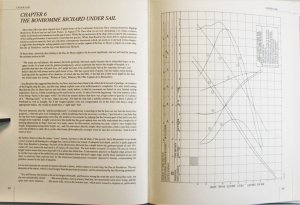 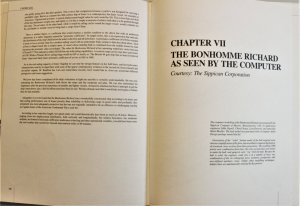 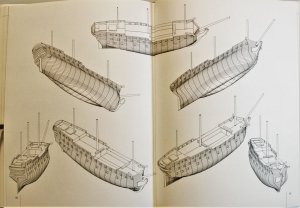 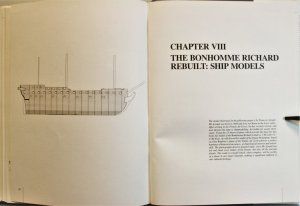 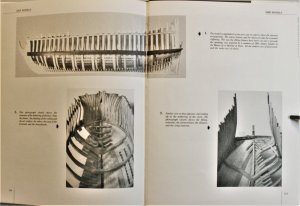 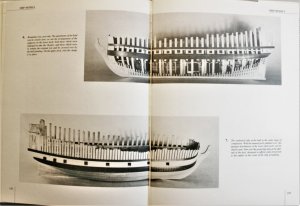 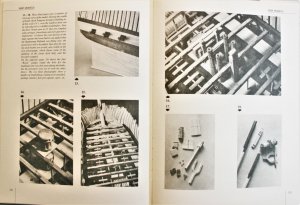 Unfortunatly the book isn´t availible at ancre.fr. The description is: Out of stock. But more than 6 month now, maybe the stoped the production of this book. In my opinion the book is only a nice to have, but the drawings are all the same as in the planset (only in small). The history is interesting to read, but only for a few pages to buy this book is for enthusiasts only to complete the collection.

@Olivers Historic Shipyard ,
I agree with you, if you have the planset, nothing new is shown in order to build the model.
On the other hand, if you do not have the planset from Boudriot and you do not want to build the model, it is a very interesting book to understand the ship and his history......as a „stand alone“ document.
Sorry, I did not check if it is out of stock. The book is often available also as second hand in very good conditions.....check it out on abebooks f.e.

Yap, for stand alone, it is a good book. A builder doesn´t need it. In Ebay.com the price is very good, but the shipping costs to europe is more expansive as the book.

Olivers Historic Shipyard said:
Yap, for stand alone, it is a good book. A builder doesn´t need it. In Ebay.com the price is very good, but the shipping costs to europe is more expansive as the book.
Click to expand...

Hello Oliver,did you buy a used book or its new from ebay?

I bought a Book and the plans used on ebay. But the planset was incomplete. I exchanged book and planset and i get back my money. But I learned one important thing. Dont buy on ebay things with various pieces. I bought a new planset on ancre but i live now without the BHR-Book. Maybe in the future when i found it cheap i will complete my collection. If not, it doesnt matter.
You must log in or register to reply here.
Share:
Facebook Twitter Reddit Pinterest Tumblr Email Share Link
Top