Book Review: "The Bomb Vessel GRANADO (Anatomy of the Ship)" by Peter Goodwin

Book Review:
The Bomb Vessel GRANADO (Anatomy of the Ship)
by Peter Goodwin 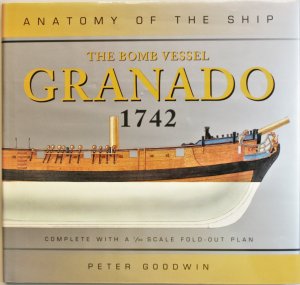 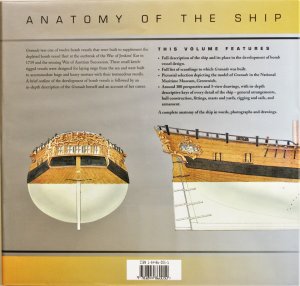 Built as a floating siege engine able to withstand the recoil of shell-firing mortars, the ""Granado was one of twelve bomb vessels supplementing the depleted British fleet at the outbreak of the War of Jenkins' Ear in 1739. This book begins with a brief description of the development of bomb vessels, from the early ""galiote a ""bombe built in 1682 to the World War II monitors used for coastal bombardment, and continues with an in-depth description of the Granado, a summary of the ship's career, and more than 250 detailed illustrations. The book also provides insights into fictional hero Jack Aubrey's first command, the ""Sophie, a 14-gun brig-sloop with a quarterdeck and stern windows. First published in 1989, this reprint includes a new fold-out large-scale plan on the reverse of the book jacket.

Peter Goodwin is widely acknowledged as one of the leading writers on the sailing warship. His published titles include the classic The Construction and Fitting of the Sailing Man of War (Conway, 1990), The Naval Cutter Alert (Conway 1992), Nelson's Ships (Conway 2002) and The Ships of Trafalgar (2005). Peter was Keeper and Curator of HMS Victory for some 20 years.' 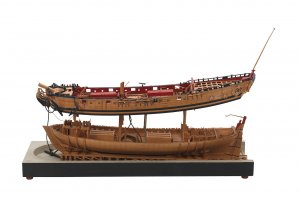 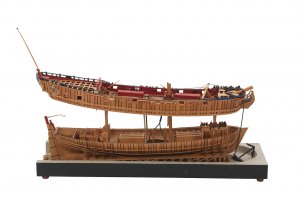 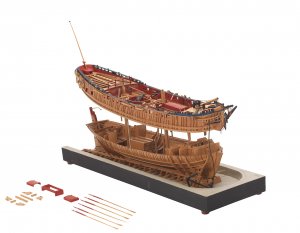 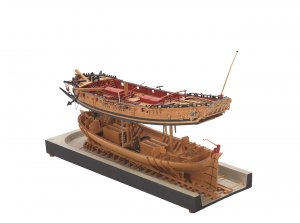 Scale: 1: 48. A full hull and partially planked model of the ‘Grenado’ (1742), a bomb ketch fitted with two 12-inch mortars. The model has been designed to lift apart to reveal the internal construction and layout of an 18th-century bomb vessel. The hull is almost entirely built from boxwood but the mortars have been turned in ebony and painted to represent bronze. It is complete with a wealth of removable parts allowing a visual deconstruction. The model illustrates how the mortars were operated and where the shells were stowed down below, and it is also has a set of large sweeps or oars as a backup should the wind drop and minor re-positioning be required. Such is the high standard of modelmaking, it was awarded the gold medal in the National Maritime Museum’s First International Ship Model Competition held in Greenwich in 1975. Vessels of this type were one of many of the ketch-rigged vessels built in the merchant yards. The ketch rig enabled the positioning of two sea mortars amidships and provided a stable platform from which to operate. The ‘bombs’, as they were known, were anchored off shore and employed in bombarding enemy coastal fortifications. The ‘Grenado’ measured 91 feet along the maindeck by 26 feet in the beam and was 279 tons burden. It had an eventful career and was present at the attack on Martinique in 1759, the capture of Guadeloupe in 1759, the capture of Martinique and the Havana expedition in 1762. It was eventually sold the following year.
Read more at http://collections.rmg.co.uk/collections/objects/66292.html#HvQaxpEHEBhVdtdx.99

A very interesting subject about a type of ship, the bomb vessels, which is often unknown.
The book with the descriptions and especially the detailed draughts is giving a modeler best information to build such a model in scratch or even to pimp the kit model from Jotika / Caldercraft.
As often with this series, this book is highly recommended for the interested modeler

(More Look Inside photos you kind find in the following post)

The wooden kit Model in scale 1:64 of the HMS Granado from Jotika: 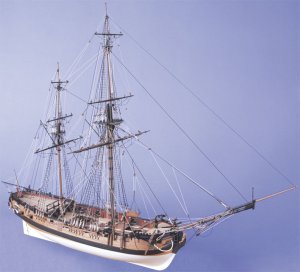 Second part of Book Review:
The Bomb Vessel GRANADO (Anatomy of the Ship)
by Peter Goodwin

There are some contemporary drawings available in the NMM:

From the HMS Granado, launched 1742 (sometimes in NMM also as Grenado mentioned) 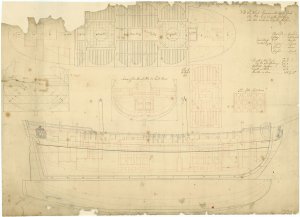 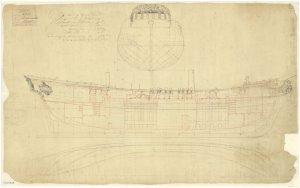 and from the HMS Serpent, same construction and also launched in 1742 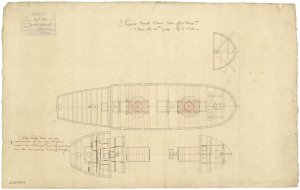