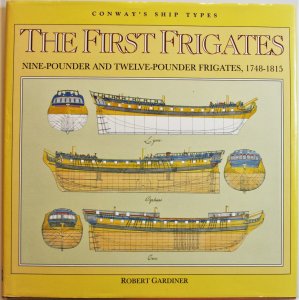 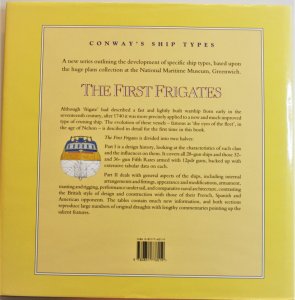 Although “frigate” had described a fast and lightly built warship from early in the seventeenth century, after 1740 it was more precisely applied to a new and much improved type of cruising ship. The evolution of these vessels – famous as “the eyes of the fleet”, in the age of Nelson – is described in detail for the first time in this book.

The First Frigates is devided into two halves:

Part I is a design history, looking at the characteristics of each class and the influences on them. It covers all 28-gun ships and those 32-gun and 36-gun Fifth Rates armed with 12pdr guns, backed up with extensive tabular data on each.

Part II deals with general aspects of the ships, including internal arrangements and fittings, appearance and modifications, armament, masting and rigging, performance under sail, and comparative naval architecture, contrasting the British style of design and construction with those of their French, Spanish and American opponents. The tables contain much new information, and both sections reproduce large numbers of original draughts with lengthy commentaries pointing up the salient features. 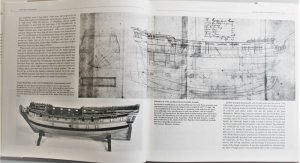 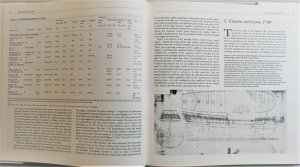 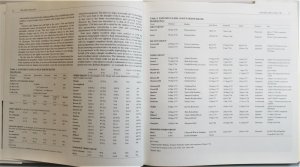 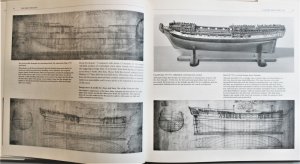 In principle I can state the same like in his other book The Heavy Frigate: 18-pounder Frigates, Volume I, 1778-1800 which was also published in Conway´s Ship Types.
It is very good illustrated with draughts from the National Maritime Museum's Admiralty plans collection. So if you are interested in the different classes of this type of ship and the evolution during the decades of this time period - highly recommended 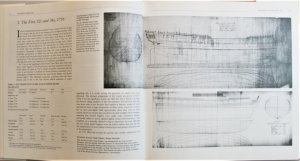 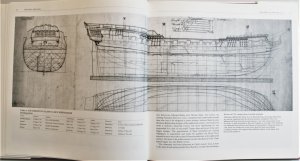 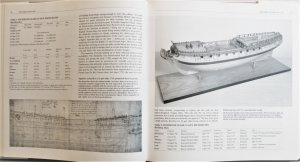 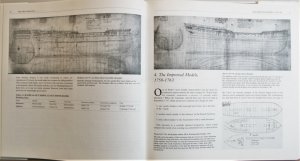 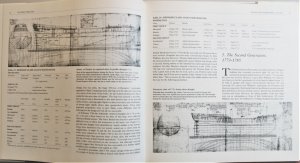 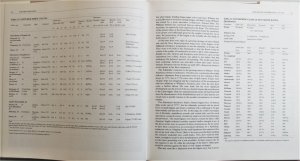 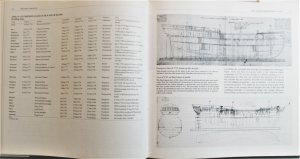 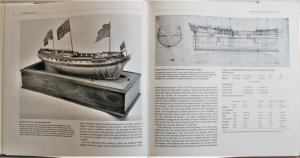 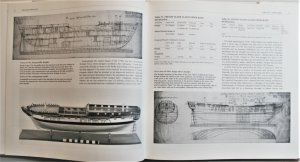 More Look Inside photos you can find in next post.... 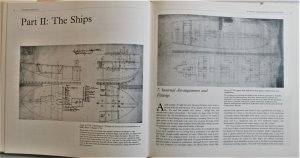 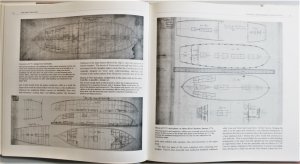 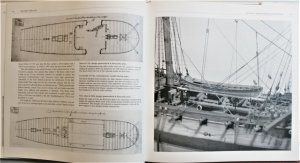 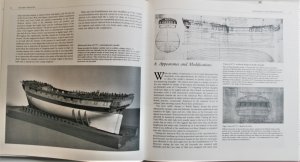 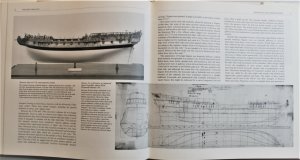 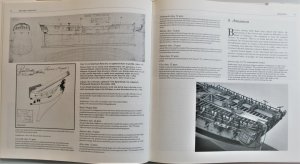 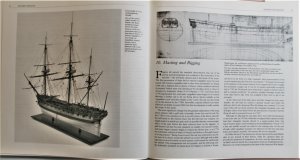 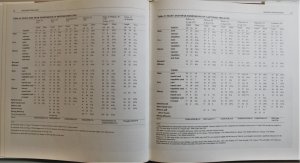 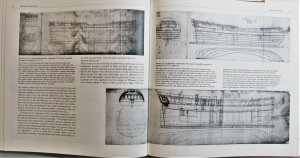 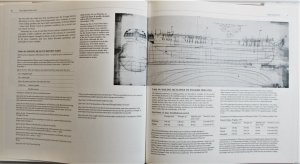 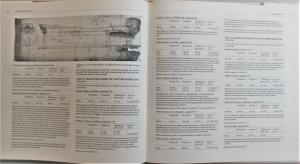 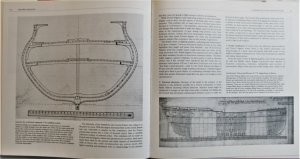 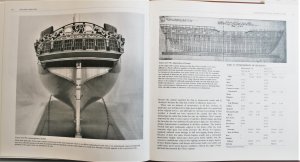 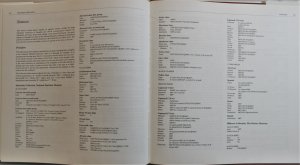 What does the name “Frigate” mean as a ship type? What was their principal use in the “age of sail”.

What does the name “Frigate” mean as a ship type? What was their principal use in the “age of sail”.
Click to expand...

In the age of sail the frigates were usualy 5.th and 6.th rated warships, square rigged and built for speed and maneuverability, with one and the heavy frigates with maximum two gun-decks, from 28 guns up to 44 or even more .......
They were usually too small to be part of a fighting line of battle, so no Ship of the Line, but were used for patrol and on commerce-raiding missions.

I just checked the description in wikipedia and the y are describing the frigates very well:

In the 17th century, this term was used for any warship built for speed and maneuverability, the description often used being "frigate-built". These could be warships carrying their principal batteries of carriage-mounted guns on a single deck or on two decks (with further smaller carriage-mounted guns usually carried on the forecastle and quarterdeck of the vessel). The term was generally used for ships too small to stand in the line of battle, although early line-of-battle ships were frequently referred to as frigates when they were built for speed.
In the 18th century, the term referred to ships that were usually as long as a ship of the line and were square-rigged on all three masts (full-rigged), but were faster and with lighter armament, used for patrolling and escort. In the definition adopted by the British Admiralty, they were rated ships of at least 28 guns, carrying their principal armaments upon a single continuous deck — the upper deck — while ships of the line possessed two or more continuous decks bearing batteries of guns.

Frigates were perhaps the hardest-worked of warship types during the Age of Sail. While smaller than a ship-of-the-line, they were formidable opponents for the large numbers of sloops and gunboats, not to mention privateers or merchantmen. Able to carry six months' stores, they had very long range; and vessels larger than frigates were considered too valuable to operate independently.

Frigates scouted for the fleet, went on commerce-raiding missions and patrols, and conveyed messages and dignitaries. Usually, frigates would fight in small numbers or singly against other frigates. They would avoid contact with ships-of-the-line; even in the midst of a fleet engagement it was bad etiquette for a ship of the line to fire on an enemy frigate which had not fired first.[6] Frigates were involved in fleet battles, often as "repeating frigates". In the smoke and confusion of battle, signals made by the fleet commander, whose flagship might be in the thick of the fighting, might be missed by the other ships of the fleet.[7] Frigates were therefore stationed to windward or leeward of the main line of battle, and had to maintain a clear line of sight to the commander's flagship. Signals from the flagship were then repeated by the frigates, which themselves standing out of the line and clear from the smoke and disorder of battle, could be more easily seen by the other ships of the fleet.[7] If damage or loss of masts prevented the flagship from making clear conventional signals, the repeating frigates could interpret them and hoist their own in the correct manner, passing on the commander's instructions clearly.

For officers in the Royal Navy, a frigate was a desirable posting. Frigates often saw action, which meant a greater chance of glory, promotion, and prize money.

Unlike larger ships that were placed in ordinary, frigates were kept in service in peacetime as a cost-saving measure and to provide experience to frigate captains and officers which would be useful in wartime. Frigates could also carry marines for boarding enemy ships or for operations on shore; in 1832, the frigate USS Potomac landed a party of 282 sailors and Marines ashore in the US Navy's first Sumatran expedition.

Common armament was one gundeck with 24–30 long guns, from 8- to 24-pounders (3.6 to 11 kg), with up to a dozen light guns or carronades on the quarterdeck and forecastle above.

Here in addition I can fully recommend another book of Robert Gardiner which is descrinbing the types and the development of frigates very well based on photos of models from the NMM.
The book is named
The Sailing Frigate: A History in Ship Models
If you click on the title you go directly to the book review I made some time ago. Highly recommended to get a fast overview.
And I guess the frigates are one of the most common and liked type of ship in modeling

Thank you UWE for the explanation.
I just ordered the book The Sailing Frigate: A History in Ship Models

Pathfinder65 said:
Thank you UWE for the explanation.
I just ordered the book The Sailing Frigate: A History in Ship Models

(There is so much to learn and so little time)
Click to expand...

I am happy, that I could help here in the decision....you will enjoy this little but beautiful illustrated book.....

The book finally came today. Fascinating reading, couldn’t put it down.
I’m going to order some of his other titles. 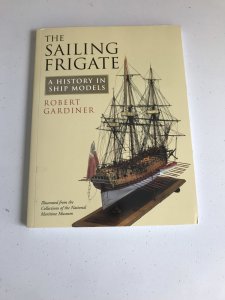 The book finally came today. Fascinating reading, couldn’t put it down.
I’m going to order some of his other titles.
View attachment 51409

I am happy that you like it - happy reading
D

Uwek, I find your reviews a GREAT HELP, and adding to my Library, just one sugestion can you give the Information of where to by the books you reviwed, also there are some great free ebooks out there on diferent sites maybe you can review some of them, I REALLY LIKE YOUR REVIEWS THEY ARE UNLIKE OTHER ONES WITH YOUR IN DEPTH COMMENTS, KEEP THEM COMMING. Don

donfarr said:
Uwek, I find your reviews a GREAT HELP, and adding to my Library, just one sugestion can you give the Information of where to by the books you reviwed, also there are some great free ebooks out there on diferent sites maybe you can review some of them, I REALLY LIKE YOUR REVIEWS THEY ARE UNLIKE OTHER ONES WITH YOUR IN DEPTH COMMENTS, KEEP THEM COMMING. Don
Click to expand...

Many thanks for your positive feedback on my reviews......and I will make further ones.
I am daily very busy with the Naval History thread, so less time for the reviews, but I will not stop them.
Related the free e-books: Due to the fact, that I have my printed copies, I have not to much knowledge about what is available on the free e-book-market - so I would appreciate here some hints.....
I have also a topic, in which review wishes could be done - so use this topic also.....
Once more Thank you for the reply