Welcome to my build log for the St. Roch. I am working from the Billing Boats kit (#605) in 1:72 scale.
Designed and built for Arctic service and launched on May 7th of 1928 the St. Roch at 104 feet in length and with a beam of 27 feet was a strong vessel constructed with Douglass fir planking and an Australian ironbark outer hull. The rounded design allowed the ship to withstand the pressure of crushing ice. However, with a draft of 12 feet 9 inches, in heavy weather the ship was uncomfortable as it bucked and heaved considerably.
The ship, constructed as a Merchant Vessel, was schooner rigged with a 150hp diesel engine. It underwent significant modifications during its 22 years of operational duty with The Royal Canadian Mounted Police. The ship served to supply remote police detachments along the coast and serve as a floating detachment and patrol (dogsled) base when frozen in over winter.
From 1928-29, the ship completed three patrol and supply missions in the Canadian Arctic. In 1930, the ship began a 4-year patrol of the north and, from 1935 to 1937 served out of Cambridge Bay.
In 1940, before the ship left Vancouver, an upgrade saw the addition of an auxiliary engine for battery charging and a steel “shoe” for the bow to aid in ice breaking. On June 21st, the ship sailed to make the first west to east transit of the Northwest Passage. She arrived in Halifax on October 11 1942. In January 1944 the ship underwent a major retrofit in Dartmouth NS including upgrade of the main engine to 300hp, removal of the wheelhouse and extensive modification to the superstructure, removal and relocation of masts and rigging.
From July 23 1944 to October 16 1944 the ship made an east to west transit of the Northwest Passage becoming the first ship to sail the route in both directions. She completed the 7,300 miles in 86 days. In 1950 the ship left Vancouver for Halifax via the Panama Canal and became the first ship to circumnavigate North America.
In 1951, the ship was retired from duty and laid up in Halifax until installation in Vancouver in 1954 where she is now a National Historic Site and a permanent display.
If this summary has been of interest there is much more information available online. The full account of the ships exploits is truly remarkable as are the photographs taken during the voyages.
The Billing Boats kit shows the vessel in the post 1944 configuration however, I want to depict the ship as it was during the 1940 voyage. Using historic photographs and a plan of the contemporary schooner Idaho I have drawn a rough schematic that will serve as a scale reference for the build. The most noticeable differences are the bow shoe (not sure how I am going to build that yet), the main superstructure and the masts/rigging.
Opening the Billing Boats kit we find seven very well defined laser cut sheets of parts, planking, plastic parts including lifeboats, mast materials (no sail cloth), an assortment of very well made brass components, one sheet of plans (two sided) and, an instruction manual that contains literally five paragraphs of directions. The instructions should not be a problem as the plan drawings are highly detailed. Overall, the quality of the parts is excellent. 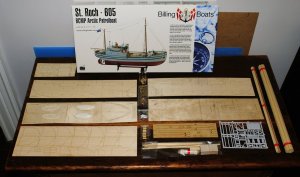 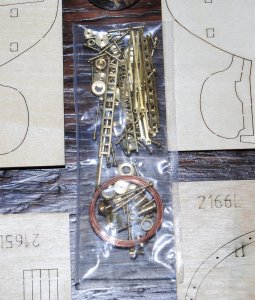 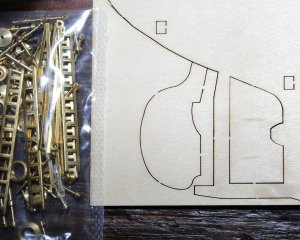 This should be interesting.

Billingboats makes really great kits, I am taking the chair to watch your build.
A

Here we go, The Billing Boats instructions say to build the keel and bulkheads in two parts and then join together after planking. I have never come across this before. Does anyone have input on this method? Over the next few days I will work on the keel and frames, the masts and a prototype of the wheelhouse, If it turns out well I will uses it, if not there will be another entry in the build log! 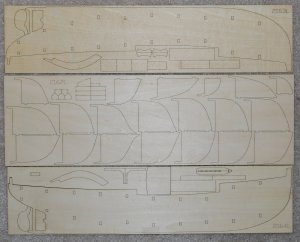 I will get more pictures posted later today. One more shout out on the quality of the laser cutting, very nice.

I see that Billingboats, still supplying some plastic parts, which you will probably replace, I will follow your log, good luck.

This can be really an interesting model - I will follow with big interest, especially to see what is possible with such a Billing boat kit

SOS wishes all the Best

Happy Birthday from all of us!!

Many thanks for the birthday greetings. Jim, I had a few more candles on my cake.
On with the log:
I have the masts, booms and gaffs shaped and have built some of the deck level equipment. As "Norway" mentioned there are some plastic parts that can be rebuilt in wood, I am doing this as some of the plastic parts do not match the plans anyway (main hold and cover - winch mounting.....).
As for the hull I have decided to abandon the instructions and get to a stage where I know what I am doing. I will join the two keel halves, mark the gunwale and plank up from the keel. The stern will need a bit of modification as the mast is being moved to the main deck. I am attaching 2 photographs showing the ship before the refit and some pictures of the hull so far. You will be able to see the amount of changes required by comparing the historic pictures with the image on the kit box.
I will be back with a better update soon 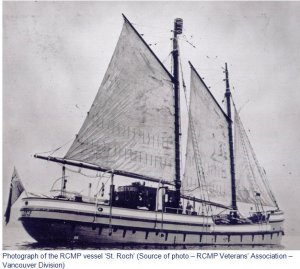 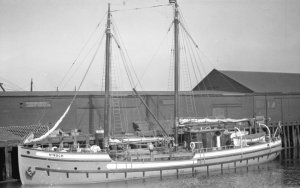 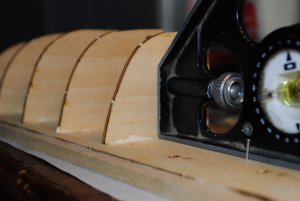 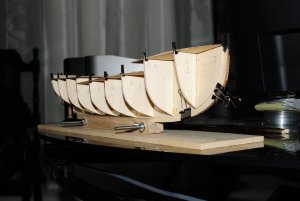 First, sorry I was away so long. Work did continue in the build so I will bring you up to date.
I found a plan for the US schooner Idaho which is the same size and style as the St. Roch and, built at about the same time. It looks very much like the St. Roch in its original configuration so I used it for the main deck and superstructure. The planking and painting went well as did the construction of the deck fittings.
Here are some photos: 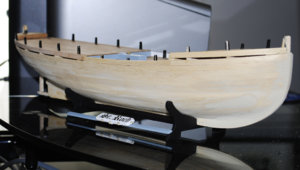 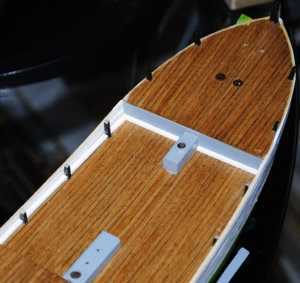 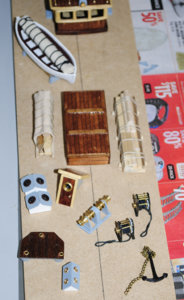 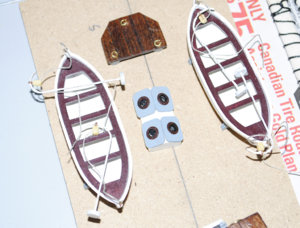 Very nice build. I am a Billing Boats fan and you have done a fine job. I read thru the complete, as of now thread and saw where you asked about building in 1/2's? Years ago I built their smaller version of the Bluenose and it too, was shown to build one side ea. left/right. I had some trepidation about this but went ahead and did just as the directions said. You have to ensure both side are identical twins to pull it off. But as is the norm with Billing Boats kits, the quality provided wood/parts, help the builder to do just that. Looks like you figured it out whichever way built. I have too, built by joining the keel pieces and building the conventual method. Looking forward too more. For a early Birthday present, I just got a Billing Boats Esmeralda 1/100. Has been awhile since I built a Billing Boats kit and I am so looking forward to it. Keep up the good work.
Rick
A

Neophyte Shipwright said:
Very nice build. I am a Billing Boats fan and you have done a fine job. I read thru the complete, as of now thread and saw where you asked about building in 1/2's? Years ago I built their smaller version of the Bluenose and it too, was shown to build one side ea. left/right. I had some trepidation about this but went ahead and did just as the directions said. You have to ensure both side are identical twins to pull it off. But as is the norm with Billing Boats kits, the quality provided wood/parts, help the builder to do just that. Looks like you figured it out whichever way built. I have too, built by joining the keel pieces and building the conventual method. Looking forward too more. For a early Birthday present, I just got a Billing Boats Esmeralda 1/100. Has been awhile since I built a Billing Boats kit and I am so looking forward to it. Keep up the good work.
Rick
Click to expand...

I was not so brave. I joined the two sides, installed the deck and planked from the keel up. I had visions of stress warping and bending within the two halves and not being able to fit correctly together. As you say, the parts are very good quality, nice cuts and perfect fit. Makes construction much simpler.
I will be looking at Billings for my next project.
B

I am also in the process of building the St Roch. In my research I discovered that the ship had a refit sometime after its transit through the North West passage but have not found much info on its 1940 deck layout. I too would like my model to be as historically accurate as it was during the event. Do you have any info on her previous deck layout.

Like you, I also immediately joined the two halves together. This is my eighth build and I have never done it any other way.

@Bob Elliot Hello Bob, and welcome onboard SOS! Since you have mentioned that you are in the process of building the ST.Roch, how about to open your own build log? Two build logs with the same ship - a great idea. What do you think? And if you need help to start your own build log, we are here to help!
A

Bob, we would love to see your work. This is a short form of what I was able to find out about the retro fits.
1940 - The steel bow shoe is the only visible change to the ship. The rest of the modifications were below deck.
1942 - This was the major refit. The main mast was removed and moved to the stern of the ship, the wheelhouse was removed and the superstructure raised (the wheelhouse was then reinstalled). The deck access and cargo bay were modified, lifeboats and ventilators were moved to accommodate the bigger engine. And, the rigging was changed.
I found a plan for the "sister ship" Idaho (built in 1913) that I used as reference (attached as a PDF) along with some historic images of the ship before the changes.
I used kit parts 33, 34, 35 & 37 as templates for the "old" wheelhouse and made a new (larger) cargo bay access cover.
You will also need to change the masts, booms and spars. This can be done with a bit of measurement from the plans and photos.
I wish you well and, shout out if you need any more information. 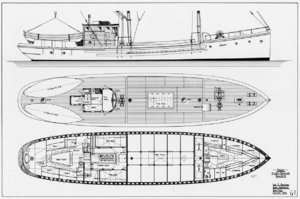 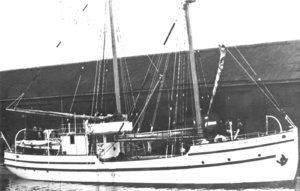 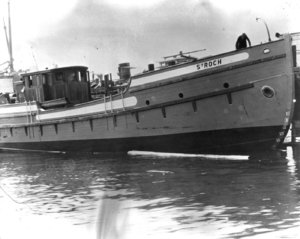 I think this one was taken during the major refit.

Thanks loads for the info and pic's. I know that the new 300 hp engine was installed in Lunenburg NS during the winter of 1942-43. I wonder if her total refit was carried out there. I live in Nova Scotia and our modelling guild operates out of the Lunenburg FISHERIES museum in Lunenburg. Our next meeting is Nov. 9th so I will see what I can find out about the refit.

Since both before and after the refit are relevant I will continue to ponder which way the build will go. As soon as I complete the planking I will post pics. I am also trying to install lighting so that running lights, deck , cabin and search lights will light up the model using tiny led decor battery lights. I hope it will add to the presentation.
B

Wow, six weeks goes by quickly when you get older. I decided to go with my build of the St Roch as it sits in the museum. Its almost finished. Working with the rigging and the various blocks. After this I will not be anxious to build a Billing model. Their instructions and part identification is abysmal. It is no wonder that so many potential ship modellers attempt these kits as a first attempt and give up because they do not understand the instructions. Oh well, I thrive on buying kits others have given up on.

How is your build progressing

I am going to attempt to attach some pics as of today. I hope this is how you do it. 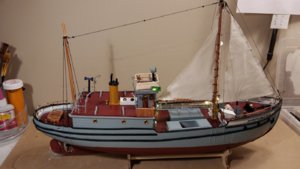 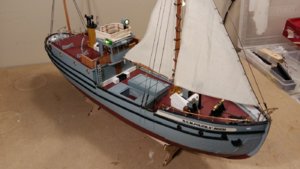 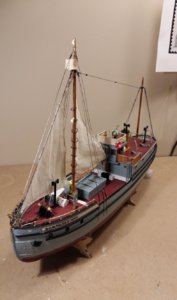 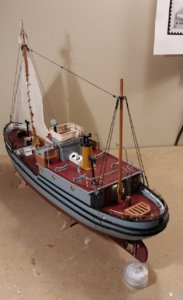